Conceptually, Nimrod is the present day Technological incarnation of the greatest hunter of myth: Nimrod, the king of Babylon, also synonymous with Mars or Marduk, the god of war, the historical template for Hercules and other Greek heroes, and the subject of many more myths and legends. Historically, Nimrod shaped the face of the world and this incarnation means to do no less.

Before there was “Nimrod”, there was a government operative by the name of Saul Beverly that worked closely with the likes of Crimson and Violet, combating threats so terrible that the good people of Paragon did not want to know of them. They did not stop bank robbers or purse-snatchers. The stakes were much higher in the game that they specialized in. It was demanding work, but he shouldered it proudly, never asking for nor expecting thanks. He was talented. He was dedicated. He was absolutely brilliant. These attributes made his fall from grace that much more bitter, however. All that Nimrod has ever said of that final mission is that “there were no survivors”.

The man known as Saul Beverly was lost beneath the rubble of a building in the region now known as Faultline along with many other young and noble heroes. Family, loved ones, and comrades were all taken from him in a flash… in the coldest of calculations by Paragon’s elite. When he was pulled from the rubble by a small group of heroes aiding in the relief effort of what went down in Paragon’s history as one of the most heinous terrorist attacks, it was only through the efforts of the empath once known as “Kai” and the brilliant Dr. Demetrieu that he survived.

In the months that followed, Dr. D worked to restore Saul. Dr. D was a mutant with the ability to invent virtually anything that he could imagine. With numerous wetware implants, Dr. D was able to give life back to the shattered mortal body of Paragon’s fallen hero. But one thing that Dr. D could not restore was Saul’s mind. Although the man once known as Saul learned to laugh and live again, there was a fire would eventually burn out of control. Taking on the name "Cross Fader", Saul began fighting to set things right.

His story was one that terrified Dr. D and the Constant. They felt they had to do something, but there was no easy solution. To reveal Saul’s secret would have meant disaster at such a critical time, in a world not even fully recovered after losing many of its beloved heroes to the first Rikti invasion. They founded “The Constant” and strove to find a way to deal with the corruption that hid behind their prestigious titles, within their high offices. These heroes argued unceasingly and often came to blows, the rest of the Constant accusing Saul of going too far... though Saul did not think they went far enough. They did not have what it would take to topple the corrupt regime that had attached itself to the city of Paragon like a bloated parasite. There had to be blood. Things had to burn. After Dr. D mysteriously disappeared, Saul became uncontrollable and was put away by the young heroes of The Constant, imprisoned in the Zig until they could figure out what course of action to take.

Again, everything was taken from him. Saul Beverly could never return to the life that he once knew. Saul Beverly was the man that had allegedly died in a terrorist attack against the nation that he had selflessly served for so long. He could never return to his family. Those that had betrayed him could not know that he had survived. Even as Cross Fader, he had been betrayed by those he loved. He would have his revenge. He would do it alone, if need be. He would become The Hunter.

Within the nigh-impenetrable walls of Ziggursky Penitentiary, Nimrod was born. 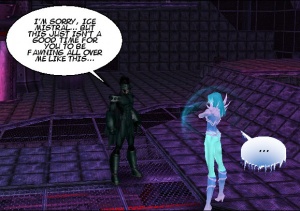 Nimrod seems annoyingly arrogant, incorrigible, silver-tongued, mischievous, and absolutely reckless... but if you pay close attention, he never breaks a sweat. Not even a hummingbird could catch him in the act. He thrives amidst chaos, using a storm of mischief, mayhem, destruction, and discord to masterfully conceal his work. In the eye of the maelstrom, he is a pillar of iron will, composure, dedication, and unfathomable focus, ever calculating thousands of contingencies within the blink of an eye. It is not by chance that he climbed his way to the top of the food chain, starting at the bottom, and earned his reputation as one of the Rogue Isles' most dangerous archvillains, and it is no consequence that disaster always seems to follow so closely on his heels.

Only a handful know his identity and beginnings, he can count them on the fingers of one hand, and he trusts even fewer. To even the most perceptive observer, Nimrod seems to fancy himself a ladies' man (note the plurality) and is never at a loss for words or a white-toothed grin. Even more impressive than his tech-given abilities, however, is his ability to slide through the filthiest circumstance and come up "clean". He is amongst the Rogue Isle's most cunning tacticians, always several moves ahead of his opponents.

Nimrod possesses no known inherent powers. Aside from the tech which he employs, which is not of his progeny, his dedication and focus in his training has left him at peak fitness. He exceeds Olympic levels in regards to his physical abilities and is nearly tireless without his technology thanks to wetware implants. In fact, he has been augmented with so many synthetic wetware implants that it's hard to tell how much of him is "natural". His pupil-less, white, synthetic eyes, his altered bio-signature, and synapses that fire at speeds that a supercomputer would envy make him a nigh impossible puzzle to solve. All but the most talented of mentalists suffer excruciating migraines or blackouts due to the speed at which his mind operates.

The spandex and tech that he wears is a technological/scientific marvel that bends the very laws of physics. While wearing it, he possesses super-speed, increased dexterity, increased density simulating a measure of invulnerability, and mastery over the kinetic energies of anyone/anything around him. The collective mass of objects/bodies in motion around him is directly proportional to the power that he can impart to himself and those around him, making his allies swift, nigh-unstoppable engines of destruction. Of late, he has also mastered altering his molecular density so as to appear invisible. It is suspected that the technology provides uplinks to any number of databases, mainframes, satellite feeds... and who knows what else. Through the lenses of that visor, very little escapes his eye, making him worthy of the legendary hunter's name that he bears.

Of note, he can also generate/amplify sounds about him at any range of frequencies, producing glass-shattering whines, vibrations that stun his opponents, walls of sound that hit like hammers or runaway trucks, or earth shattering blasts that flatten everything around him for a city block. He rarely relies solely on sonic assault, however, preferring to support his team and turn them into unstoppable juggernauts. Not to say that he can't clear a room when he needs to...

Nimrod has been running with the Rogues Gallery after his separation from the X-Patriots and still has close ties with the Decimators, Gods of Villainy, Gaia's Banished, Jaded Angels, and other factions within the Isles. He even spent a short sentence within the haunted walls of Bedlam Asylum.

He has several close friends that have gone into hiding or disappeared to pursue private vendettas/agendas. MossTrooper, Annie Matter, Alpha Decay, Axl VanHagar, Jumproot, and Silent Solution are amongst his closest allies and friends within the seedy underworld of crime that is The Rogue Isles.

It is a well-kept secret that Nimrod was affiliated with Paragon's Constant, a hero organization that is dedicated to uncovering the political corruption and wrong-doings of the powers that operate within the hallowed halls of Paragon City.

I'm a Light RP concept player rather than an AT or build creator, so... when I think of a good concept, I feel obligated to bring it to "life" with a Silver Age flair. Hence, I have a quite a bad case of Altism and almost 40 alts.

Drop me a line anytime.