One day, while engaging in some random, improvised Arr-Pea, something clicked as I began to tap into my ID. From there, things quickly began to fall into place...

I haven't been the same ever since.

Three years ago, Doc Buzzsaw was kidnapped by a rogue Death Mage, bent on gaining full control of the CoT. The unfortunate "Doctor" was forced to assist in building and animating a gruesome construction of great strength and considerable size. This Death Mage used his knowledge of black magic and the arcane to trap and bind a "barbed demon (or Hamatula)" within this abomination. Forced to do the mage's bidding, this barbed demon merely bid it's time, now that it had a physical vessel in this world to carry out it's only desire...

To destroy and consume all living things.

This thing, proceeded to allow itself to be used as a tool to remove anyone who may have prevented the Death Mage from gaining more control, and proved to be a most savage, yet methodical killer. 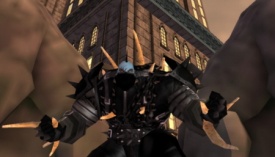 Upon discovery of this hostile attempt at take over, the rogue Death Mage was eventually captured by CoT inquisitors and subjected to torture, eventually revealing the details of his nefarious plan and his so called, "servant" before his execution. Upon locating this abomination, the elders used Madness spells to capture and subdue the demon/construct, not fully realizing it's true capabilities and cunning. During it's imprisonment, they received no useful information and were only met with defience. When asked it's name, the last thing heard uttered by it before the mutilation of those present, was "DIESELMEAT!!!"

Finally free of his binding tasks set forth by the rogue Death Mage, Dieselmeat went on a rampage throughout Perez Park, killing many innocent citizens in some of the most horrific displays of violence ever witnessed. Eventually Longbow, aided by some fledgling heroes, tracked him down, defeated him, and placed him into the Ziggeraut Maximum Security Prison for all of our safety, or so we thought until Lord Recluse's attack on the ZMSP.

Arachnos' attack freed Dieselmeat, allowing him the chance to flee for the Rogue Isles, were he spent his time regaining strength, honing his skills, committing random and heinious acts of violence and crime, and providing muscle for The X-Patriots for the better part of 1.5 years.

Prior to his mysterious disappearance which lasted the summer months, it is now known that Dieselmeat had severed ties with that organization, and briefly sworn alligence to Ghost Widow. Ghost Widow released him from his "physical prison", allowing him to return to his true demonic form and bestowed access to certain powers of her choosing in return for unknown tasking. No current images or further information regarding this association have been obtained.

Classified as missing for quite some time, Dieselmeat reportedly resurfaced in the Rogue Isles, and has been hell bent on causing as much pain and suffering as possible, regardless of the cost. Recorded sightings have been few to date, but have been confirmed on two seperate occasions via surviellence video. Thus adding further proof that this deviant, and extremely venomous killer, is aggressively increasing his frequency of terror sprees throughout the Isle's.

The leader of this group Mindswipe along with Dieselmeat, co-cordinated a plot to destroy Paragon's Terra Volta reactor and simultaniously managed to defeat, and kidnap the heroine known as Dragonberry. A ransom was made via satallite during an interrupted The Cape radio broadcast. This act of terrorism, forced many well known heros of Paragon City to band together to take on the Rogues Gallery assisted by numerous other fiends from the Rogue Isles, to try to prevent an environmental disaster and save one of their own. The Rogues Gallery plans were ultimately thwarted by the hero coalition, with Paragon City, the reactor and Dragonberry being saved, but Mindswipe, Dieselmeat, and the rest of the Rogues Gallery were forced to flee back to the Rogue Isles. It is assumed that they are planning something even more terrifying for the citizens of Paragon City and it's heros.

Recent reports state that Dieselmeat had defected from the Rogues Gallery following this defeat, and briefly joined forces with the Abyss Empire. Currently specualtion is that Dieselmeat appears to be operating on his own, but conflicting information states he may still be in association with Rogues Gallery. Truth to any of these sitreps of group association have not yet been confirmed at present time. 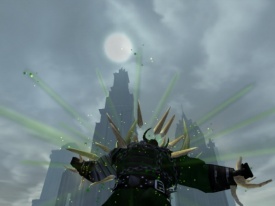 As a Barbed Demon (Hamatula), Dieselmeat has the ability to produce numerous, elongated, bone-like spines from his body. These spines are needle sharp and also produce a highly toxic venom. Dieselmeat's ability to detach, throw, and rapidly regrow his spines only adds to the serious threat he poses when encountered. Watch out for the grapple! As if getting close to a barbed demon wasn't bad enough, Dieselmeat is also an excellent grappler. Some of his most ferocious attacks involve grappling and impaling a victim. Worse, every time you strike back while grappled, you will take damage again from his poisonous barbed defense.

The wounds inflicted by these spines can bring about death through infection, envenomation, tissue damage, and loss of blood. Incidentally, the spines toxin may affect a vicitm's respitory system, thus slowing one's ability to react or defend. Documented Dieselmeat-related poisoning cases have stated severe reactions including anaphylactic shock, excessive tissue degeneration around the wounds leading to amputation, coma, and even death.

Another ability observed is the power to Shadow Walk. This blurring of reality between the Plane of Shadow and the Material Plane, renders Dieselmeat virtually invisible and able to utilize shadows as a means of camouflage, travel, and/or escape. Perception type powers and inspirations have proven to aid in detection, but caution is still advised due to increased risk of critical strikes from Dieselmeat while in this altered state.

Dieselmeat posesses an innate ability for rapid cell regeneration. Also referred to as spontaneous regeneration, tissue regeneration, epithelial cell regeneration, or rapid healing. This is the ability to regenerate damaged tissues and cells at an increased metabolic rate, resulting in physical injuries healing in a matter of seconds. Further studies have proven that this ability can also heal nervous system damage, as well as amplify other defensive resistances. It should be noted that "ice based magics and powers" appear to slow him to varying degrees, but interactive caution is still advised.

Keeping a level head and an awareness of your surroundings may keep you alive if you use a few simple safety procedures. Do not let curiosity and carelessness kill or injure you. 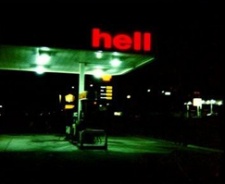 An extremely volatile temperament, coupled with an insatiable lust for ruin.

Feel free to add yourself, if you dare! 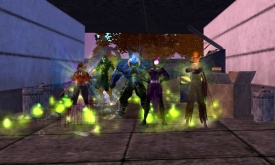 This former Bounty Hunter and Commander of The X-Patriots has been laying low, operating behind the scenes of the Rogues Gallery out of Warehouse 13, emerging from time to time, to fight the Rikti threat within the Rogue Isles. Dieselmeat and Nimrod's past history together in the X-Patriots, is peppered with attempts on each other's lives. Despite their differences, both have a mutual respect for one another's power, and quite often put them aside to achieve certain common goals.

Due to inept spellcasting, Ganglati (an extremely powerful demon) was fused to a human host, American citizen Tyler Preston, who was presumed dead at a concert. Ganglati and the human host proceeded to lay waste to the site until Longbow forces suppressed the outbreak of panic and took Ganglati into custody. The entity became known as Rakescar and was incarcerated into the Ziggeraut maximum security prison in Paragon City, RI, until the massive Arachnos triggered jail break freed it from its confines.

Over the course of the next two years, Rakescar and its human host cooperatively went from small time thug to major villian in the Rogue Isles and Paragon City. The villian organization X-Patriots harbored Rakescar for a year, using it as a self-guided weapon of mass destruction, until it was expulsed from the group due to friendly fire.

During that one year period, Dieselmeat and Rakescar worked together quite often, developing an unspoken partnership of sorts, and mutual admiration for each other's extreme cruelty. Both challenged themselves to increase their strengths, and diminish any weaknesses. Most apparent, was Dieselmeat's contempt for Rakescar's human host Tyler Preston, which was considered by Dieselmeat to be Rakescar's Achilles' heel.

While honing their abilities, Rakescar and Dieselmeat assisted the X-Patriots and each other on numerous raids in Siren's Call, in addition to committing many other acts of violence and crime, throughout the Rogue Isles and Paragon City. Most recently, confirmed reports state that the symbiotic conjoining between Rakescar and his host, have been spit into two separate entities. When teamed together these two monstrosities, now each in their fullest potential, can become a two man wrecking crew leaving a bulldozed path of death and destruction in their wake.

Additional information states Rakescar is currently in association with the Rogues Gallery. If this report is true and he is alongside Dieselmeat again, God help us all!

This titan of living metal recently resurfaced in the Rogue Isles after a long hiatus. Having served as one of Adamant's soldiers in the earlier days of the X-Patriots, Dieselmeat's loyalties run deep. With Adamant on board with the Rogues Gallery, big things can and will happen.

After his arival in the Rogue Isles, Billy Ray crossed paths with The X-Patriots. He served with the criminal organization for many months working his way up in the group to the rank of captain alongside Dieselmeat, but has since parted ways with The X-Patriots. After taking some time off, this strange but dangerous villain has found new vigor using his powers of plant control for the criminal organization Rogues Gallery.

After being broken out of the Ziggurat in 2006, Mr. Mud has become mired in an onslaught of criminal activity. Involved with both Arachnos and other shady contacts on the Rogue Isles, he has fallen straight back into his old ways. Now known to be involved with the criminal organization Rogues Gallery, and temporarily involved with the supervillainous coalition and terrorist group known as the Sadistic Seven. 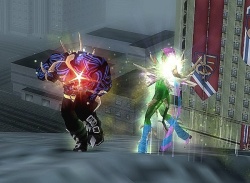 Feel free to add your name to the list, if you dare!!! 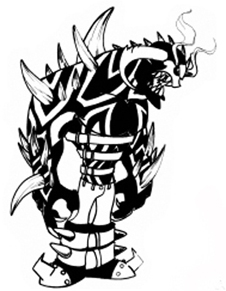 Feel free to add here. True or not!

"Dieselmeat" is not your typical demon. He has no connection to any royal linage, and is not some "demonic leader" of any type. He is more of a "blue collared worker from Hell". The creative inspiration for him stems from "The Violator" or "Clown" from the "Spawn comics" and falls more into that type of demonic mold. Just one of many nightmares from the pit... 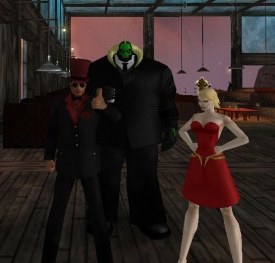 Barbed demons serve as the Abyss guardians of vaults, treasure caches, jails, and other places of importance. Barbed demons are also commonly employed as bodyguards for more powerful devils or demons, who acknowledge the skill and tenacity that these savage engines of annihilation show in their work. They are distrustful, horrible creatures, with glowing eyes and gnarled teeth that make them constantly appear agitated -- Agression in barbed demons is considered a positive trait to the superior devils or demons that make use of barbed demons in this capacity. If you encounter a barbed demon guarding a location, its acute senses ensure that it is unlikely to be caught unaware.

Demons have no regard for the responsibilities of authority, and they care little for keeping what they acquire. They’re forces of unmaking, and a universe under them would reflect the horror that is the Abyss, if that universe survived at all.