Rogues Gallery was originally set up as a Legion of Doom/Secret Society of Supervillains inspired villaingroup, which would welcome costumed criminals of all kinds united in one group that provided them protection, information and allies with which to battle Paragon City's superheroes. The Rogues Gallery was founded on November 2nd, 2005.


Although Rogues Gallery has recently seen a decline in activity; it is currently back on the upswing. With new blood swelling it's numbers, the villaingroup is once again placed to threaten the peace of Paragon City.

Rogues Gallery is an underground coalition of costumed criminals who have banded together to provide each other protection, information and back-up in times of trouble with the heroes of Paragon City. The group operate out of the abandoned and mysterious Warehouse 13, a building that has been both a factory and a warehouse before being redesigned and extended for it's current, nefarious purpose. The criminals who make up the Gallery often have wildly differing agendas, motivations and goals, but they are all united under the group's chief motto; 'Strength in Numbers.'

The origins of the group known as Rogues Gallery start as far back as 1995, when the villain Mindswipe first met Mr. Mud, after they had both been hired by the villain Crimewave for one nefarious plan or another. When this plot inevitably failed, the two remained close associates, and over the next few weeks cooked up plans for a series of heists in Paragon City's casinos.

All of these robberies centered around a very simple, uniform plan. Mr. Mud would walk into the central lobby of their target and simply begin smashing the place up, drawing the attention of all security and police personnel. Leaving the vault unguarded, Mindswipe would then mentally convince all involved that they simply could not see him, and would waltz into the vault, taking as much cash as he and Mud desired. Mud would then make his escape as Mindswipe wiped all minds within a mile radius, leaving them dazed, confused and unsure that they had even been robbed at all.

After this crimewave, Mud and Mind remained close allies, and became partners in crime between jobs and time spent in Ziggursky Correctional Facility. Their partnership ended in 2004 when Mr. Mud was arrested and convicted of Super-powered Robbery. Not long after in early 2005 Mindswipe was also convicted and sent to The Zig.

On October 31st, 2005, Mindswipe was sitting around in his cell when the walls of the impenetrable prison began to fall. Marching in were hundreds of agents of Arachnos, herding villains to their cause. Quickly, Mindswipe left his cell, and tried to reach Mr. Mud's, three stories above. The path to Mud's cell was blocked by piles of debris, however, and Mind was forced to leave him behind.

On arriving in the Rogue Isles, Mindswipe then stumbled on Warehouse 13. Many have said that this is in fact false, and that Mindswipe was spotted around the Oil Spill district and even inside Warehouse 13 at various points throughout the nineties. Mindswipe completely denies this, and claims that he only discovered its existence after his escape from Ziggursky Correctional Facility. Next, he took control of a horde of Crey technicians, and forced them to gut parts of the base and rebuild it with Crey technology. When they were done, he left them unsure where the last month of their life had gone, sitting on the docks in Nerva Archipelago.

From there, Mindswipe began to recruit. The first members were villains Cynobite, Mindmauler and Psijacker; their fifth member came in the form of a ghost who had chosen a long forgotten cult church hidden within the walls of Warehouse 13 as her haunt. She announced herself as Banshee Bride, and joined the group soon after. A slew of supervillains followed, including Doctor Verdant and Omega Nova.

Mindswipe had originally set up Rogues Gallery as a protectorate against the tyranny of heroes who would would try to foil his plans, allying other villains to his side for aid in times of trouble; the group only grew from a protectorate into an informational source where it's members could find out about vulnerable targets for kidnap, poorly guarded bank vaults or inquire as to which crimelords were hiring henchmen and lackeys to their cause.

Mr. Mud escaped from prison in March 2006, during the second high profile Arachnos raid on Paragon City. Escaping into the main exercise yard, he attempted to board an Arachnos Flier, but was told he wasn't on the list of villains to retrieve. Angered, he broke his way through the fences and out onto the streets of Brickstown, where he looked up the now retired villain Incognito, who concealed him and drove him to the docks in Independence Port, where Mud bribed a fisherman to sail him to the Rogue Isles.

Upon his arrival, Mr. Mud looked up Mindswipe and learned of the Rogues Gallery. While for a time Mud remained solo with only minimal links to the Rogues, since late 2006 he has joined officially, risen in the ranks and is now one of the leaders of the core group.

Since then, Rogues Gallery has expanded both Warehouse 13 and its membership, and now has among its membership many high profile villains, such as Emperor Xanatos, Nimrod, Freezeforce, Mr. Rot, Certifiable, Mr. Devastation, international thief The Furtive Fox, Dieselmeat, and Rakescar.

Recently the Rogues have been involved in many high-profile attacks on Paragon City, and are developing quite a rivalry with many members of the Defenders of Paragon, including Xanatos, Bayne, Cloud Runner and most prominently, The Havok Brothers. The Rogues have also been known to tangle with members of the Teen Squadron and the Peacekeepers.

While not a comprehensive list, the following are all affiliated with Rogues Gallery: 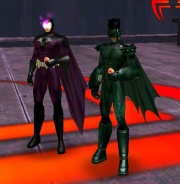 The Rogues Gallery maintain a strong coalition with the following groups:

The Rogues Gallery have developed rivalries with the following supergroups in Paragon City:

To contact Rogues Gallery, use the relative safety of the Internet.

A word to the wise, those who have sniffed around Warehouse 13 or the Oil Spill district at large have been known to disappear.
Retrieved from "https://virtueverse.net/wiki/Rogues_Gallery"
Categories: Villain Group | Rogues Gallery