Paul Ocean led a relatively normal life, growing up in Bristol, Rhode Island ("America's Most Patriotic Town"). He discovered his mutant ability in his mid twenties when confronted with an oil spill at the docks. His mutant physiology began to neutralise the pollution, absorbing it while Paul stood nearby. He felt sick as a dog for a week afterwards, but he'd prevented a minor catastrophy.

With time Paul gained better control over his powers, and found he was able to neutralise all kinds of airborn pollutants, toxic spills, and even radioactive leaks. The process weakened him, but he began to be able to absorb more and recover faster. He rechristened himself "Spillkit", and took up a full time job helping clean up pollution. After two successful years Hero Corps contacted him, and together with two other Heroes (Evac and Quarantina), they put together a Supergroup called the Cleanup Crew. Instead of tackling supervillains, they fought industrial accidents and chemical spills.

However, one of the most powerful supervillains on Earth had heard of them and taken an interest.

The being known as the Hamidon[1] coveted Paul's powers. The Hamidon sent his Devouring Earth[2] monsters to capture Spillkit, and infect him with the Will of the Earth [3] virus. Lured into a trap by the Devouring Earth, the Cleanup Crew were quickly overpowered. Instead of being Devoured [4] however, Paul's mutation blended with Hamidon's warped bioengineering and caused Paul to become something totally different. He melted away in front of the creatures, and seeped into the drain. His mutant powers backfired and began to incorporate pollution into him, transforming him into a colony of living trash and sludge. The results were horrifying and the toxins drove him mad. The man Paul Ocean ceased to exist, and Paul Ooshun the monster was born.

Rising up from the sewers, Paul Ooshun swore revenge on the Cleanup Crew for not protecting him, the Heroes of Paragon who had let monsters such as this thrive while he was cleaning up their mess, and the very earth itself. Possessed of a mad desire to wreak environmental havoc and bathe in glorious nuclear waste, Paul Ooshun set out to kill his former team-mates. He succeeded in drowning Evac in sewage, but Quarantina was able to keep him at bay with her force-field powers until the authorities could contain him. He was sent to the Zig for murder.

Paul Ooshun was broken out of the Zig by Arachnos, but not taken to Mercy Island. Instead Arachnos troops took him to assault a base containing a cauldron with a variation of water from the Well of the Furies. Paul's powers tainted the magical elixer, causing death and disfigurement in test subjects rather than superhuman powers.

Paul took up residence in Port Oakes in the Oil Spill district, bathing in the abundance of pollution there. His proximity to Warehouse 13 got him noticed by the Rogues Gallery, and in time he agreed to join them.

The heroes Rosethorn and Stalwart decided to put a stop to Paul Ooshun, however he proved much more dangerous than people initially realised, and badly injured both of them. Quick to take advantage of this Nimrod staged a number of crimes in quick succession using Paul to cause damage and humiliation to several unpopular institutions in Paragon, and winning a certain amount of anti-establishment kudos from the citizens for the Rogues.

T.O.X.I.C, a small division of Longbow, recieved the go-ahead to create the first Captain Crisis. Crisis was a variant Warden with powers based on the genetic template of the members of the Cleanup Crew. Within a few short months T.O.X.I.C were ready to move against Warehouse 13 to end the destructive menance of Paul Ooshun once and for all. They contacted Angela Vidal, formerly the heroine [[Quarantina], and convinced her to become bait to lure out Paul Ooshun. She reluctantly agreed.

Having set up a base next to Warehouse 13, Captain Crisis and the assault team from T.O.X.I.C got ready to make their move, and Angela was "spotted" in Port Oakes to lure Paul into the trap. Unfortunately a turncoat Longbow member blew the cover on the operation in return for cash from the Rogues. Mindswipe monitored the nearby operations and the tables were turned on the T.O.X.I.C soldiers.

The ensuing all-out battle in Port Oakes ran through several warehouses and streets and Rogues came pouring in to ensure the Longbow operation got slapped down hard enough that it served as a lesson to others. Captain Crisis was caught slightly off guard as the Rogues brought the fight to T.O.X.I.C before they were fully ready, but even so he managed to fight them off and reach Paul Ooshun. He began to dissolve Paul, using the bio-technology they had been working on to mimic Spillkit's pollution-absorbing powers. The Rogues soon regrouped, however, and Mr. Mud beat down Crisis before he could fully destroy Paul.

An enraged Paul managed to find Angela Vidal and despite her attempts to reason with her ex-team mate, he killed her. He then stole the bio-technology that T.O.X.I.C had used to boost [[Captain Crisis] and ingested it, triggering an evolution in his own powers. Over the next week Paul began to gain in mass and took on the enhanced strength and durability of Captain Crisis. His pollution powers also increased in potency, rendering him immune to the anti-pollutant bio-nanites that T.O.X.I.C developed. 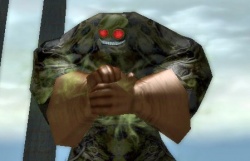 Paul Ooshun is something of a "Mister Hyde" character when compared to the man who was Paul Ocean. He's excitable and callous. Paul likes to disgust his enemies, and he revels in their reaction to his antics. His condition has left him derranged, taking a gleeful pleasure in inflicting damage on the earth and on heroes. He's still quite smart though, and will lay traps for enemies. Despite his resilience he is not a natural fighter and sometimes retreats even when he has the upper hand.

He has a twisted sense of humor, and enjoys taunting his enemies with irreverant and often crude jokes. He shows little remorse for his actions, including murder, but he does not kill for sport or pleasure. He much prefers to humiliate and disable enemies, only killing when he has been enraged or to protect himself or his cronies.

Since the transformation Paul constantly binds pollutants to his skin and absorbs them to make up a body. He can emit sonic blasts, poisonous gas, doses of radiation and various acids and oozes. He has a degree of control over these as the biological mutant nanites he produces can direct them to attack certain enemies. He also emits a low level psychic effect that can be painful to those caught up in his corrosive cloud.

Paul Ooshun's body is a living sludge, making him quite tough to cause permanent damage to. Over time he can reform from ambient sources of pollution. He's mastered a trick where he stores gas ibnside himself then detonates his own body like a grenade. Afterwards he can clump his body back together and slink off somewhere to recover.

Mentally the exposure to the Will of the Earth virus has left his whole body as a deviant colony of the virus. Psionic types will find his mind a buzzing hive with little "human" thought discernable. Magically he displays no supernatural power, he's just living trash - mystically inclined characters might want to think of him as an undead cesspit.

Paul thrives on pollution and lives off of the material and energies he absorbs. Clean, healthy and natural environments tire him out. 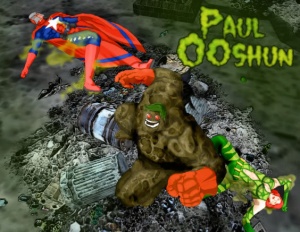 Paul has no magical talents, and originally wasn't much stronger than a normal human (although in a fistfight he has a nasty tendency to try and ooze into his opponents mouth and nose...). He's since transformed further thanks to the attempts by T.O.X.I.C to destroy him, and now posesses greatly enhanced strength and resilience. T.O.X.I.C R&D are now unsure if it is possible to "kill" Paul Ooshun permenantly, and are working instead of containment strategies.

Paul also has a number of psychological weaknesses which can be exploited. He seems unwilling to admit that he is Paul Ocean, who he insists on referring to as a separate entity. He demonstrated a great deal of distress when Melissa and Matthew were threatened by the villain Sychosis. He also uncharacteristically rushed to help the heroes Aglow and Brickbreaker when Ultimogirl asked him to. However, Paul is also known to deceive and manipulate people. He seems to have a knack for finding sore spots in others and provoking them. Great care should be used in trying to manipulate him, as clumsy or amateurish attempts will result in brutal retribution.

Current member of the Rogues Gallery

Former member of the Cleanup Crew