The Scorpio Society, suppossedly, is a large network of nefarious individuals with the ultimate goal of controlling the world behind the scenes. However this is all speculation. The existence of such a Society has never been proven. The following is based on a series of rumors and speculation.

The Scorpio Society was officially founded in 333 BC, at the Siwa Oasis, Egypt. Egypt at the time was under control of the Persian Empire. The Egyptians were far from a willing satrapy. As news of Alexander the Great's war machine reached the western borders of Egypt, the families of this small community were torn between the idea of finally being out from Persian control, and the revulsion of being the servants of yet another foreign government.

Yet, things changed when the Oracle for which Siwa was known made a predication that Alexander would conquer Egypt as well, sooner than any had anticipated. So three families came together in secret determined to take matters into their own hands. No longer would they let others control the outcome of their lives, nor would they seek a public position of power. Those who controlled the governments openly would seen be conquered and killed, but much could done from the shadows.

That night, the Scorpio Society was born. Using the power of religion, and feeling backed by the gods themselves, they quickly spread the word of the Oracle's prediction adding their own influence. Soon throughout Egypt not only did people know Alexander was coming, but they praised him as the living sun of Ammun Ra, and the true Pharoah of Egypt. After all, the Oracle of Siwa had said it was so.

Much too Alexander's surprise when his armies reached Egypt, they offered almost no resistance, and soon he had turned his armies around to war elsewhere. Egypt became connected to Greece technically, but far more free than it had been under Persia. Its economy and traditions once again flourished, and in the background the Scorpio Society did too.

The Shadow of the Mediterranean 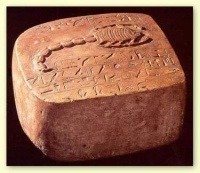 An engraved cornerstone that members would use to identify themselves.

As Greek influence waned and the Roman Empire flourished it became clear to the leaders of the Scorpio Society that the time had come for them to assert more control over an economic system that was becoming less local every day. The Roman Empire was a clear tool for such a leap. In 30 BC, during the Battle of Actium, the Egyptian ships retreated early, without every engaging the enemy, tipping the scales clearly in Rome's favor.

As demand for Egyptian goods spread throughout the Roman Empire so did the Society. While they had grown in number and control, communication became slowed by distance. The hierarchy thinned and small cells became more and more independent. They began distinguishing themselves, some favoring the power of the gods, some new war technology, and others still empowering themselves with the dark arts. Even with their disagreements they still worked together, never showing the world their true power.

Finally, their was a breakthrough in their research into new pools of power. A rare metal, called Ethereum, was found in the mountains north of India. Through a new refining process, and an intricate binding ceremony, one could use it to form magic runes that would channel powerful attributes from the spirit of willing ancestors into their bodies. This process came to be known as Essence Capture. So the Scorpio Society had agents throughout the worlds greatest empire and beyond who could call upon stores of great strength, speed and even wisdom beyond their time, when needed. It was the greatest success the Society had ever seen, and it would eventually lead to their greatest troubles.

In 619 AD, the Persians once again conquered Egypt, but the Scorpio Society no longer felt any racial connection to the area. They were much greater than any tribe of man, and the fall of Rome seemed an inevitability. In fact the leadership of the Scorpio Society, at the time referred to as the Telson, had decided that Scorpio Society would remain out of the Roman-Persian wars themselves. They instead stepped in after one side had conquered a territory to ensure their economic rights and help guide the establishment of local government as well as borders.

When the Western Roman Empire began to collapse many agents found themselves in hiding, and reinventing themselves in the shadows. As they disassociated themselves with Roman ties, and integrated their families into new local cultures they lost consistent contact with the Telson, and central structure for several years. This separation and then re-unification helped create the micro hierarchy of a cell system that has sustained throughout the Scorpio Society till this day. 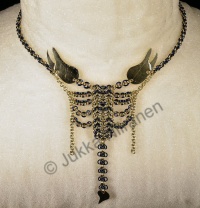 A necklace used in certain ceremonies of the Clan of Soul

Through the seventh and eight centuries, the cells within the Byzantine Empire began to feel a similar effect. During these times of separation many cells of a greater region would come together to develop policies and tactics and then separate again to carry out the plans. The groups of cells adapted their methods and specialized and soon became known as the Seven Clans. They were:

In 837 AD, the Telson, who was of the Clan of Beauty, passed down orders that all cells were to fully support the spread of Christianity in all regions. Christianity was one of the last unifying factors of nationalized Europe and he hoped with its further spread that the Scorpio Society might again gain the economic prominence that it had during the Roman Empire.

This did not sit well wit the Clans most notably the Clan of Soul, who saw clearer means of power and were growing tired of their economic warfare, and the Clan of Faith who still held the old Egyptian gods in the highest regard. The Clans began formally separating from the Telson one by one. At first the Telson struggled to keep the other Clans in line through acts of assassination and espionage. Soon enough however, no other Clans stood united with Beauty.

In 846 AD, the Clan of Faith positioned the Saracens to sack Rome. The head family of the Clan of Beauty were forced to flee and the War of the Seven Clans officially began.

It is not clear which events that follow in history are driven by the clans, kings or popular religion. Certain assassinations, wars and even the events of the crusades are often debated even amongst the Scorpio Society itself.

The war ended several hundred years later in 1428. The War had taken its toll on the Clans to the point where many agents had gone into deep hiding for their own protection and few Clans could claim influence on anything resembling a national level. A man called Scorpius A Perenius, had left the Clan Wit to study the old ways with a seclusive sect of the Clan of Faith. Initially rejected by both, he soon proved himself by anonymously doing great deals throughout Northern Africa. Finally he was allowed to train.

It is said that during this process Scorpius of Wit gained the favor of the goddess Sekhmet. With this favor the main, already a capable warrior gained the control of the element Fire. He began a campaign throughout civilization seeking out the hidden Clans and preaching to them a doctrine of strength through unity. Along the way he is credited with many good deeds that, most out of character for the society, seemed to serve no need of the man himself. The true nature of these "good deeds" is hotly contested among the Scorpio Society. Many said that are merely tales that seek to ingrain him as a man of legend, others say he was a profit who foresaw how his deeds might ripple into the future and cause him gains perhaps even many generations from then.

One thing is clear; he did manage to unite the Clans once again. Scorpius of Wit, established the Scorpion Council, that held one seat for each of the seven clans. Those seven would then elect one among themselves to act as General. The General would hold meetings and help set agendas, but all major decisions had to be voted on by the seven, with the Generals vote not counting for more than the others. Scorpius of Wit held the post of General for many years. Years later he stepped down and disappeared.

After the war, The Scorpio Society again spread themselves and continued their earlier policy of control from behind the scenes. While aggressive practices were sometimes necessary their main tools were economics as well as political subterfuge. The Society helped bring in an age of new technologies and prosperity, an effect which trickled down into the rest of society.

Slowly the Clans died out as plans and agents spread. Many members still claimed the heritage of a certain clan, but they no longer held influence. The Scorpion Council continued on, with the seven seats being occupied by specialty branches of the organization.

At some point during the 19th Century the process of Essence Capture was lost to the Society. Some say that the ancestors who granted those abilities no longer approved of the Society, others say they lost favor with the old gods and still others claim that such a process never existed. However, it is also around this time the Scorpio Society took another turn towards firm control of the way the world was running.

Their operations extend now all over the world, with training facilities in Italy, Spain, Venezuela, Cuba, Saudi Arabia, South Korea, Australia, Russia, the Philippines, and one developing in the Rogue Isles.

The Scorpio Society has an active cell within the Rogue Isles that has recently made itself known, threatening the heroes of The Legion and their associates in the LISA Network.

Research & Development has been working stolen Council in order to reproduce the Galaxy Soldiers. They are also working with Rikti technology to develop science bred psychics in a similar manner to The Lost.

The head of the Scorpio Society is Scorpius A Perenius who has taken the title of Prophet, as an attempt to garner cultish levels of loyalty.

The Scorpion Council, is now known simply as The Board. Prophet Scorpius represents the Economic Advancement Division. The other six divisions that have Board Seats are Research & Development, Arcane Operations, Intelligence, Organizational Manipulation, Para-Military, and Propaganda.

Each division is then broken up into several layers of directors, which may different titles depending on the division.

Operations are broken down into cells. Cells can range from 2 people to around 500 depending on its purpose and usually involve several divisions. For example, any cells operating out of a stagnant location must at least have the Para-Military Division present for defense, as well as the Propaganda Division for cover up.

Each individual cell has its own command structure and head director. In this was a soldier from Para-Military might be reporting to a scientist in Research & Development within its current cell. At the same time that Soldier is reporting to his director in Para-Military. This keeps a kind of internal checks and balance system.

The Scorpio Society will also fund outside agents for missions on many occasions who may not even have direct knowledge of their greater operations. In this way some villains find themselves on the payroll of the Scorpio Society without ever becoming members at all.

The Scorpio Society has been known to deal with Arachnos for occasional joint operations, but more often for economic or research interests.

The Scorpio Society has on occasion hired these thieves for larger operations in exchange for a cut of the money, and/or technology.