Ebon Thunderbolt is a mercenary; he'll do anything if the price is right-and he'll try to find the easiest way to get it done. Ebon's a Rogue's Rogue, through and through; he'll work for anyone if the money's good, whether it's for Lord Recluse and Arachnos, or the good folks at Vanguard-or even the forces of Longbow. The cash and the thrill is the thing. 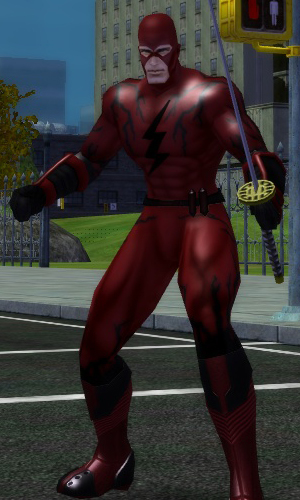 Ebon has a bit of a wit about him. While he tends to be serious while he's working, when he's not he'll crack a joke and throw out puns. On his own time, he affects a relaxed pose; a very casual style of speaking and acting. When he's working? He's no-nonsense, quiet, getting the job done. When people pay for his services, they pay for professionalism-and that's what he delivers.

Ebon doesn't have an axe to grind; he doesn't carry grudges. He'll be just as happy to work alongside someone who tried to kill him the week before, and vice versa. As long as he's paid, he doesn't much care who he works for. Strangely, he's also a merc who will stay bought; he doesn't do the double-dip of asking a target if they want to pay him to not complete his assignment. If he's being paid to do a job, he does the job-he's not about to be bribed out of it. "Bad for business", he'll tell people.

Ebon does not possess any powers-or at least, that's what he tells everyone. What he does possess is skill and cunning. And a few bits of choice equipment doesn't hurt either.

One of those choice bits is his katana. As he puts it: "Katanas are just better". In spite of the flippant attitude, Ebon is as skilled a swordsman as he claims to be-and he talks big.

Ebon's training is the one thing he takes seriously. He puts himself up against super powered opponents who can burn him to cinders, freeze him into a lump of ice, sizzle his brains, or generally pound the daylights out of him. As such, Ebon has worked hard to sharpen his reflexes to the point where hitting him is more of a theoretical exercise for most.

Ebon does not live on skill alone. He has a few other surprises available to him-one of which wasn't exactly intended on his part.

Thanks to the efforts of his tech buddy, Professor Dredd, he wears a belt that helps negate gravity's pull on him for short periods of time-enough time to make leaps of great height and distance.

What Ebon didn't expect was to have access to a strange kind of dark magic. The Seers of Arachnos have theorized that since Ebon has usurped the identity of his predecessor, the forces of magic have chosen to listen and serve him as they did the original. Since Ghost Widow is choosy about who uses powers she has granted, she has tasked a Night Widow to observe and assist Ebon when necessary. Popular rumor indicates that this Widow has become his lover, and he does nothing to refute the rumor. It is, however, also likely that she is under orders to kill him if Arachnos deems it necessary.

In 2011, Ebon learned that he was prophecied to become an "Incarnate" by the Menders of Ouroboros. Ebon didn't have a clue what the hell they were talking about, but it sounded like a good gig. It sounded better when he learned that it meant having godlike power. Ebon's a bit sorrier now; while he has reaped the benefit of slowly coming to the attention of the Well of Furies, it's also dragged him into situations he'd have preferred to avoid (Romans? Rikti?! And what's this about Lord Recluse taking everyone's power?!?!). The upside, though, is that it's becoming easier and easier to fight for an extended period of time-and since for Ebon, being tired is the same as being "dead", he's willing to accept the troubles that come with it.

It's also netted him other benefits. In addition to being able to throw literal ebon thunderbolts at people in his way, he has also managed to create a regeneration field-he suspects it's tied to the soul mastery abilities somehow. Ebon has wasted no time exploiting these newer abilities. An additional benefit was the sudden arrival of a pair of Carnival of Shadows representatives offering their "services" to him-a Seneschal (Helen) and a Dark Ring Mistress (Mistress Kindra). Given the assistance he already gets from Widow Shania, he's started referring to the three as his harem. (It's worth noting that they are not amused; Shania and the Carnies hate each other like fire....)

Ebon has occasionally remarked that he was an Olympic-level athlete before becoming a mercenary, although he has not revealed just what his area of expertise might have been-although track and field activity tends to be the popular theory.

Ebon tends to the overconfident. No situation is too tough to overcome-and he occasionally loses track of details like his allies dropping like flies around him. This, more than anything else, is probably why he works alone most of the time.

The original Ebon Thunderbolt was a minor villain-and that was being kind. He was caught by low security-level heroes early in his career and jailed in the Zig. He was a minor martial artist at best, and he never even gave his real name; accordingly, his prison records record him as a "John Doe".

Things got complicated when, in late 2007, Ebon suddenly began displaying abilities and skills far beyond what the wardens at the Zig realized. He broke out of the Zig single-handedly, killing guards, stealing an Arachnos Flier, and headed off to the Rogue Islands. The truth of the situation would not be revealed until 2009.

The truth was that the original Ebon Thunderbolt had been replaced by an accident occurring on an alternate Earth. The original was sent to that Earth, while his genetic double arrived in Primal Earth. This Ebon was one of the most dangerous criminals on his world; an assassin unmatched and the leader of a Black Syndicate of criminals on his home Earth, Ebon carved out a place in Primal Earth, defying even Lord Recluse and his plans for Destiny. Ebon came into conflict with assorted heroes, imprisoned twice; on the second imprisonment, he was extradited back to his original Earth, after heroes of both worlds came into contact, leaving behind a reputation of efficiency and bodies lying in his wake.

A rogue in the Islands decided that he could make use of that reputation. According to his claims, he'd already been operating in the Islands for sometime, but didn't like Arachnos or its hired thugs-but at the same time, he did like the prospect of getting a great deal of cash from them. While his previous identity remains unknown, he quickly assumed the "Ebon Thunderbolt" name for his own, convinced an ally of his to take up the "Professor Dredd" identity, and broke out on the scene as a mercenary willing to do whatever it took to get the job done-and promptly offered his services to other organizations than Arachnos; he even offered his services to the Vanguard and to Longbow.

Ebon now operates wherever he pleases; one day assisting the master plans of a mad scientist in Grandville, and the next day beating back an attack from the Fifth Column in Paragon City. It doesn't make for a consistent moral compass, but it pays the bills-and now that he's using the name of an infamous villain, he can start gaining the benefits of a far larger payscale.