Admiral Cain: Sometimes, we have to do things that we never thought we were capable of, if o­nly to show the enemy our will. Yesterday, you showed me that you were capable of setting aside your fear, setting aside your hesitation, and even your revulsion -- every natural inhibition that during battle can mean the difference between life and death. When you can be this for as long as you have to be, then you're a razor. This war is forcing us all to become razors because if we don't, we don't survive.
—Michael Taylor, Battlestar Galactica: Razor (2007)

When Galaxy City was destroyed, a few friends and I wanted to throw our own spin on what happened-a group of paramilitary mercenaries from space who were caught up in the event, and crashed their ship into Galaxy City as the meteors came down. Qi'Lar was my entry for the group. 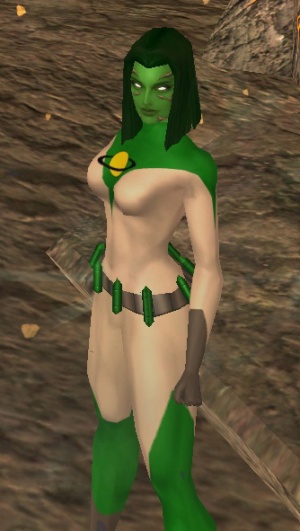 Qi'Lar is best described as "shock troops" all by herself. She's happiest in the thick of the fighting, whether with the weapons supplied by the regiment or with her own fists. She's been a student of the regiment's leader, Exarch Llan Llenthoril, who despaired of her ever figuring out long range strategy-but she's a fast learner on small scale tactics. On duty, she's cool, collected, disciplined-fitting of a soldier in an elite outfit. Off duty...well, she lets it go. Regimental scuttlebutt is filled with stories of bars that have been damaged due to brawls that tend to be started by Qi'Lar. While Qi'Lar insists that most of these stories are apocryphal, it is known that most of her pay seems to be sent to whatever planet the regiment had most recently enjoyed shore leave upon.

Qi'Lar's powers stem from two sources: the high technology enjoyed by the Null Division, and her heritage as an Akklesh.

Qi'Lar's cyberskeletal structure supports a musculature genetically tweaked, giving her strength far beyond what her form may seem capable of. While she had usually used it to support the use of seriously heavy weaponry, the destruction of the Division's armory has caused her to rely on simply punching things. At her strength level, that strength makes her a match for a number of the "super villains" on Earth.

A belt worn by Qi'Lar can-when active-surround her with an exotic energy field which can help protect her from incoming harm, whether in the form of energy beams or raw physical abuse.

Qi'Lar's strength has had a handy side-effect on Earth.

Thanks to Earth having a slightly weaker gravitational pull than many worlds she has been on recently-plus the fact that her strength is already enhanced-Qi'Lar can leap tall buildings in a single bound.

As a heavy weapons expert, her usual equipment usually consisted of a large rifle that looks more like a tank cannon than a rifle (the Liefeld X-S); unfortunately, with the destruction of the ship's armory in the Crash, she's down to using her fists. She is also finding a surprising-to her-talent for organizational leadership that had been malnourished until the Exarch Llan Llenthoril promoted her to Autarch in the Null Division.

Qi'Lar suffered damage to her cyberskeleton during the Crash. Earther technology has been unable to adapt to what she needs to effect full repairs. The result is not only a diminished capacity for her strength-which she is making strides in fixing-but also with attacks of pain throughout her nervous system. It hasn't hit during a fight, yet, but she worries that it's only a matter of time.

To understand Qi'Lar, one has to have some understanding of her species-an alien race known as the Akklesh.

The Akklesh might have been destined for the trash heap of evolution, being comparatively physically frail compared to other bipedal species. But they did have a knack for engineering tools; they developed simple tools disgustingly fast in comparison. Those simple tools became the foundation for larger ones, and set the tone for the evolution of the species. Small tools were used to create larger tools; those tools were used to create even larger ones. And once automation got involved, their technology took a quantum leap forward. In a short time, the Akklesh became known as a heavily industrial species, capable of mass manufacture to a scale barely imaginable.

Now, the Akkelsh Confederacy holds four factory worlds (all in their solar system), manufacturing facilities encompassing several asteroid belts, and fields a respectable military. Popular rumor is that the Confederacy has actually constructed a fifth factory world, instead of converting another world into one. Their space fleet, while seemingly small in number, is capable of the same mass manufacture, capable of creating support ships at need-or potentially more factory vessels. In spite of this production capability, the Confederacy has no imperialistic desires as a whole; they are interested in simply continuing to build, and making sure that potential aggressors get the message of "Do NOT mess with us. Seriously. We'll stomp you out, wipe out your species, and convert your worlds into raw materials."

Technology has allowed them to rebuild their own physiology-as a rite of passage to adulthood, each Akklesh undergoes cybersurgery and biotreatment to enhance the strength of their musculature and skeletal structure. Depending upon the chosen professions of the individual Akklesh, this could be tweaked to an obscene amount of strength. The soldiers of the Akklesh are, as a result, cybernetically modified to be the strongest of the species. (They realize, however, that physical strength only gets you so far in a universe where disintegrator rays can take you out at 1000 yards.) While most of their technology is focused on industrialization, they have traded services with other species' tech; the other aliens supply the innovation, and the Akklesh supply the mass manufacturing capability. These trades have benefited the Akklesh enormously, not only allowing them to rebuild themselves, but to also reduce the waste of manufacture to nearly nothing.

Militarily, as mentioned above, the Akklesh are formidable defenders. Thanks to their modifications, they can carry weaponry far out of proportion to their size, and are skilled at mechanized warfare. For the most part, they are solely for defensive purposes, but as each Akklesh is free to choose their own life's path upon adulthood, many choose to go out and explore the universe; some as scouts, and some as mercenaries.

Spiritually, the Akklesh believe in an Ideal Creator, who seeded their homeworld with life-and perhaps other worlds as well. When an Akklesh dies, they are sent out on their "Final Journey" to blaze a trail from life to what lies beyond for those who follow. This was originally done upon their oceans, but once the Akklesh became a spacefaring race, it became more common to commit their bodies to the void of space.

Qi'Lar joined the Akklesh Confederacy's militia after her Rite of Passage to adulthood. She proved to be a discipline problem, however, and was drummed out early on. Undeterred, as she craved a life of excitement and conflict for a just cause, she joined the Null Division-even with the knowledge that such service would take her out of Akklesh space for years at a time. The Exarch of the Division, Llan Llenthoril, saw potential in her; not only did he trust his instincts, but his heritage as a Tredexian gave him a limited precognitive ability, which confirmed his feelings. Qi'Lar rose to the rank of Autarch, and was eventually named second in command to the Division.

Not long after the promotion, the Division's home base, Touchstone, was destroyed by an alien force. Vowing revenge for the lives lost at Touchstone, the Division pursued the aliens, which they nicknamed "Slags" across star systems, before catching up to the main force-in the form of asteroids-near a fairly primitive planet the indigs called "Earth". Unfortunately for the Division, they had attracted the attention of their enemy-exotic radiations penetrated the hull of the ship and started animating equipment on board-including that stored in the ship's armory. The attack killed the Exarch, suddenly putting Qi'Lar in command as the ship was crashing into Earth-on the day Galaxy City was destroyed.

Qi'Lar and others survived the Crash, but most of the Division was unaccounted for-either because of being killed or from evacuating prior to the Crash. Qi'Lar assumed command of the Division, and acted to gain the cooperation of the locals. Since then, the Division has spent most of its time in Galaxy City, fighting the Slags-who were known as "Shivans" on this world-hoping to defeat them once and for all before they try to find a way to return to their home in the stars.