The first thing necessary for a constructive dealing with time is to learn to live in the reality of the present moment. For psychologically speaking, this present moment is all we have.
—Rollo May, Man's Search for Himself (1953) 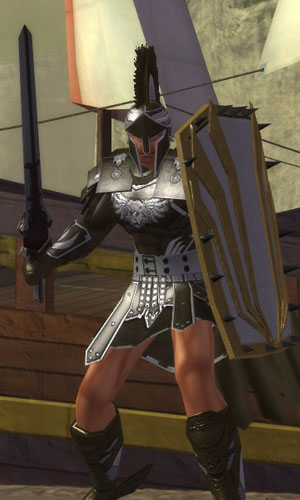 While the various personalities shown by the Aspects of Timelost are wide and varied, there are some commonalities to them.

For the most part, all of them are motivated to fight the good fight, preferring to defend others than to attack them. Despite the histories of the assorted Aspects, they refrain from killing their opponents-recognizing that this is not how things are done in Paragon City. All of them are confused by certain aspects of their arrival in the city-such as how they can all speak the language instead of their native tongues. With the exception of the future Aspect, none of them are aware of the fact that they even have other aspects of themselves operating in the city (the future Aspect, on the other hand, tends to not speculate out loud as to why this is).

Timelost, in any of his Aspects, has yet to be seen "off duty", and it is possible that a given Aspect is simply returned to his proper place in time when this occurs. As a result, he is always ready for action when he is seen in the city, and tends to be impatient to do whatever it is he feels is needed.

Timelost, in all his various incarnations, has demonstrated significant skills that match him up well with most of the heroes of the city-all hailing from martial backgrounds.

Timelost is an exceptional swordsman in all of his Aspects. While the swords used seem to be unwieldy instruments in lesser hands, they are deadly instruments in his. In spite of the lethality of the swords, each Aspect of Timelost has gone out of his way to avoid killing his opponents in Paragon City, striking to wound or disable.

Timelost has in all his Aspects a shield for his own protection. It leads the way in his charges, and it protects him from attacks from the physical to the supernatural. As the shields are aspects of the Aegis (or at the very least possesses a fragment from that shield), they enable Timelost to stand and fight in the face of withering attack.

Timelost's other talents come from both intense training, and another object of mythological importance.

As every Aspect of Timelost has been a soldier of some type (at least, those Aspects encountered in this time), he is always in top physical condition.

By virtue of the talaria worn on his feet, Timelost can move at what can only be described as superhuman speeds. While he is no speedster in comparison with heroes who have made speed their calling card, he does match up favorably in running speed. He has been known to demonstrate bursts of speed when defending or attacking in dangerous situations.

In each of his Aspects, Timelost has been a soldier, and is familiar with various forms of military discipline-although this tends to be limited to what that given Aspect was familiar with.

Without his equipment, Timelost is just an ordinary man.

Because of his nature, Timelost may or may not remember encountering people he has previously met-and in some instances, he may remembering people he has met for the first time. Sometimes it appears as though his Aspects share certain memories in Paragon City, but at other times, he does not even remember events that the particular Aspect has participated in. In other words, one cannot count upon Timelost to recall any past events he has been involved with in conjunction with other heroes.

It is worth noting that sword and shield of all the Aspects are, in some ways, aspects themselves of the mythological Aegis and Sword of Hades. The shields are indestructible, and the swords are sharp enough to cleave through even the most durable armor.

Timelost may be one man, or he may be five. He may be an immortal, or he may have been reincarnated multiple times throughout history. His basic appearance-the man behind his equipment-remains unchanged, but each "aspect" remembers only one lifetime, with little awareness of the others (with perhaps a single exception). All of the Aspects can speak English in this era, and none of them are certain why they are manifesting here in the present day. 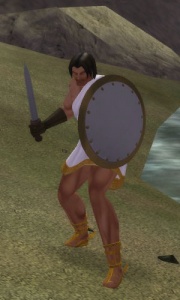 Zosimos apparently originated in ancient Greek times, as a citizen-soldier of Athens. When pressed, he cannot specifically point to the period of history where he existed prior to his current existence; but based on comments on having survived plague in his day, some historians estimate his original lifetime having taken place around approximately 430 BC.

It is likely that this is the first Aspect of Timelost, as he bears the talaria of Hermes in its purest form-the winged sandals that make him fleet of foot. He wields a simple shield and sword, although both are far stronger than either should be, given the technology of the time. MAGI speculates that the shield incorporates an aspect of the Aegis, the shield of Zeus, and the sword an aspect of the sword of Hades; this remains just speculation at this time.

Gaius Herminius claims to have served in Caesar's armies, participating in the campaign in Britain. This would indicate that he likely originated approximately 50 AD as a member of the Roman legions under Tiberius Claudius Caesar Augustus Germanicus. Gaius speaks of having having fought in the Ninth Legion, which was regarded as an "infantry assault legion". He bears a sword significantly larger than used by most legionnaires, and his shield, while somewhat conforming to the legion standard, remains as a more unique defense. Again, MAGI speculates that this equipment is simply a further aspect of deific tools.

This Aspect was a sophisticated soldier of his time, able to think on-the-fly and coordinate men under his command; MAGI was able to identify in their histories a Roman "fleet of foot, bringing doom to those who stood against him", and believe this is a reference to Gaius. 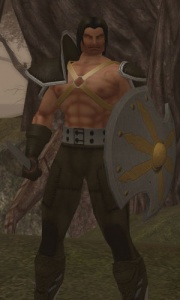 Again wielding a simple sword and shield (although once more, touched with greater than normal durability), Alric was one of the barbarian hordes that fell upon the Roman Empire at approximately 370 AD. Unlike his previous incarnations, this Aspect was not as sophisticated in the arts of warfare, simply using his indestructible shield and unbreakable sword to hammer at his foes until they fell before him. The talaria, incorporated in his boots, are an affectation-at that time, he had no idea of their true power, and was not known to have utilized their swiftness during this lifetime.

This Aspect was the least intelligent of the Aspects of Timelost, but was counterbalanced by a brutal honesty and loyalty toward his friends. 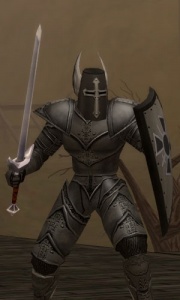 Sir Robert the Swift claims that he was one of Charlemagne's paladins, having fought against injustice throughout his career. This is speculated to be the first Aspect (chronologically speaking) that showed the personality associated with heroes. A man of honor, duty, and fidelity, Sir Robert continues to wear the talaria, although few associate it with the gods of Greek myth. Likewise, the great broadsword and shield he carried were considered perfect examples of the armament of a knight, tools that would not break until he did.

Robert customarily wore a suit of full plate armor, complete with helm. In spite of its heavy appearance, however, it is far lighter-and resultantly weaker-than most armor of the period. Robert would rely heavily on the swiftness of his sword and the strength of his shield, as well as his skill with both, to protect himself from harm. 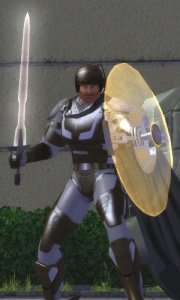 Disturbingly, the last Aspect known to have manifested in the present comes from not the past, but the future. The technology of the energy sword and shield is a close match for Vanguard technology, and John Smith (the name he gives, which he admits is not his real name) is decidedly close-mouthed about how far in the future he comes. He's revealed that a future conflict is "not going well", and is familiar enough with current events to make him the most relatable Aspect of Timelost. He is also the only Aspect to have suspicions as to why he is in the present, as well as the only one to recognize that he is only a single aspect of Timelost.

Even though his equipment has a high-technology origin, he still wears an aspect of the talaria on his feet, which enables him to move as swiftly as his other Aspects, and the mystics of MAGI as well as the technicians of DATA desperately want to research his sword and shield to see if they are also aspects of the Aegis and Hades's sword-and to learn if they can be duplicated.

Timelost appeared in Paragon City in mid 2008-or at least, he began appearing at intervals. Each time, however, he has appeared in a different Aspect. In each case, he may or may not remember heroes he has worked with before, and none of the Aspects can explain why they are so much alike...or why they are being drawn to Paragon City.

Almost none. The Future Aspect, as cagey as usual, suspects that the presence of Ouroboros in this era is responsible in some way-perhaps even the Midnight Squad's dabbling in the flow of time may be contributing. But even he isn't sure why he is being drawn from the timestream to the present day. He can only hope that an answer may be found in the near future-so as to find a way to make sure he isn't sacrificed as a pawn in some greater game.