Marcus Cole: We walk in the dark places no others will enter! We stand on the bridge and no one may pass!
—J. Michael Straczynski, Babylon 5 (Grey 17 is Missing) (1996)

For a long time, I'd been trying to work up a "master of the mystic arts" style concept that paid homage to the sorcerers of comics, but at the same time contained my own spin on them. After a number of failed attempts, I came up with Gatewarden, a member of a mystic order that's a lot less reclusive than the average. 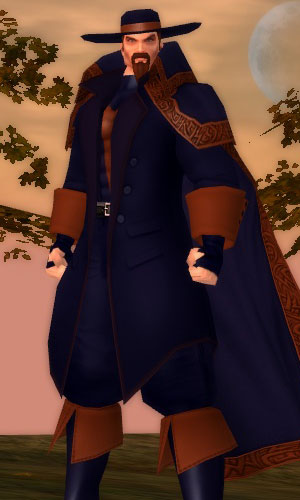 The difficulty of unravelling Gatewarden's personality comes from the fact that it's uncertain as to whether or not it actually is him. There are four people who claim to be Gatewarden; given his facility with illusion, it is possible that he may be any one of them-or none of them! Likewise, it is possible that these people are real Gatewardens, who occasionally use the appearance of the others. It has proven best to simply examine the traits of the individual "appearances", with the understanding that any or all of them may change-or be entirely wrong.

The man most frequently encountered-the one registered in the superhuman registry in Paragon City-can be considered the "baseline" Gatewarden. He affects the demeanor of a "wise man", who sees his exploration and study of magic as a journey to be experienced. He believes that having the ability to utilize his magic should not be solely restricted to his duties, but to helping mankind as a whole. This activist stance is what led him to come to Paragon City, and it may have influenced his order to do the same by his example.

Perhaps because of his facility with illusion, however, he tends to be faintly suspicious of people at first glance, but rarely demonstrates it outwardly. Gatewarden is confident in his magic, believing that he can deal with any situation that develops. This could result in overconfidence in the future.

This appearance tends to affect a mild superiority complex, not without some justification. He claims to have studied the arts of magic for nearly a century, and casts his spells without excessive dramatics. He does not take criticism well, and is willing to compare his experience with any takers. "When you have kept out the horrors that want into our astral plane for the last eighty-five years, then you can critique my skills" has been one of his cutting remarks.

Gatewarden is not a man who can tolerate impertinence, and is more than willing to abandon those who offer it to their fates. He believes that he's gotten too old to waste time arguing with fools. To those who listen, however, he will often offer some information or lore lost to even the Midnight Squad and MAGI-mystic secrets hoarded for centuries by the Gatewardens.

This Gatewarden tends to be fun and occasionally flirty. She is well aware of her appearance, and uses it to advantage-anyone who believes she is simply a bubble-headed floozy, though, quickly discovers that her skill at magic is just as great as the others of her order. She is mercurial, prone to sudden shifts in attitude, and those who get on her bad side get put down-hard.

Gatewarden is kind and friendly in general, however, and is willing to help in even the most trivial matters. Unlike the others, she is willing to trust easily, believing that if most people are given the choice, they will choose to do the right thing. She's been disappointed enough to know better, but she still maintains her faith.

Loud and rambunctious, willing to let everyone know his opinions, this large Gatewarden is easily the most outgoing of the order. His studies and duties have led him to see the face of Death Itself, and having done so, he chooses to live his life to the fullest. What better way to mock Death, he says, than to show how much he loves life? He casts his spells with flair, and with a smile on his face.

He is as comfortable in a sports bar as he is in a library-and he may be the most book-learned of the Gatewardens. His own personal libarary tends to be filled with tomes both magical and otherwise, and most have his annotations in the margins-written with the same zest for life, with comments on how a spell may be improved to either seal off a gate to the Outer Darkness, or improve the taste of light beer.

The Gatewardens refer to themselves as "the Points of the Pentacle". This would imply that there would be a fifth Gatewarden yet to be revealed.

Gatewarden's power is derived from his studies of the art of magic, a blend of natural talent and dedicated learning. As such, he relies on magical spells to create the effects he desires. While more potent magics require time-consuming rituals, incantations, mystic gestures, and even proper breathing, there are some abilities he has mastered to the extent that he requires a minimum of effort to manifest.

Gatewarden's strengths appear to involve illusion. Weaving light and sound together-and perhaps touching the minds of those witnessing them-he can afflict them with terrifying wounds, pull out images of their greatest terrors, bind them with illusory restraints, or make them believe that their allies are, in fact, their enemies.

Gatewarden may also create beings of illusion, phantasms to fight as he wills, often displaying an assortment of apparent effects. All harmless...unless the witnesses believe. Gatewarden is VERY good at making them believe.

This facility with illusion is one of the reasons why it is difficult to determine Gatewarden's true identity; he may be any of the faces he presents to the world-or none of them. It is not outside the realm of possibility that all of the Gatewardens are in Paragon City, interchangeably using each others identities at need!

Gatewarden will often cast spells to weaken his foes before he attempts to inflict his illusions upon them. Mystical energy can cripple his opponents, leaving them unable to defend themselves properly, unable to hurt others as cruelly, slowing them down and making them more vulnerable to harm. If he wishes, Gatewarden can surround himself with an aura that paralyzes those with the intent to harm.

Gatewarden has cast a number of spells that have far-reaching effects, only requiring daily maintenance to continue.

Spells cast upon his clothing permit Gatewarden to defy gravity.

Some of the magics that Gatewarden has demonstrated skill with involve the manipulation of the soul-whether his own, or another's. How far this goes is something yet to be shown.

Gatewarden is a student of the arcane and the occult, and is knowledgeable in the study of magic in several forms. His area of specialty tends towards what he refers to as "the things in the outer dark", and in the strengthening and closure of dimensional portals.

It seems likely that Gatewarden is also a consummate actor.

Gatewarden's strengths also demonstrate his weaknesses-he is unable to wield other magics as easily or as flawlessly as the spells described above. In order to create greater magical effects, or even lesser effects that affect the world in other ways, he must utilize spell rituals-which often require expensive or rare materials, a test of will on his part, and most importantly, time. Outside of his specialties, the use of magic carries a price, and these are potentially only a small amount of that price.

Gatewarden possesses an aspect of the device known as the Blackwand; his aspect possesses supernatural sympathy with the original, and draws its power from that.

From the archives of the Midnight Squad

The Order of the Wardens to the Gates of Infinity (commonly referred to as "Gatewardens") claim to trace their heritage back to the days of the First Generation of Adam and Eve. One of the few statements on the subject made from this order indicated that Adam taught five of his children-sons and daughters both-the secret arts of magic. It is quite possible that the order was far more powerful in the ancient days-presuming this is true-and lost much of their power as the idea of magic became more ritualized. Of course, there is no way to verify this claim.


The name comes from what they say is their sacred duty: to prevent the abominations and horrors from "the Outer Darkness" from coming to this astral plane. As such, they became experts in magics that sealed off breaches into what we view as reality. There are always five of them, and they will often refer to themselves as "Points of the Pentacle". When one perishes, another steps in to replace the fallen-possibly having been trained since an early age for such a duty. We have found no special school or pattern to indicate who may become a Gatewarden.


The appearance of a Gatewarden can vary wildly, each having their own preferred style of dress, their own mystical tomes, their own talismans. The only thing they have in common is a silver ring that they wear upon their right ring finger. Inscribed on the ring is-in their language-the phrase "I Bar The Way". The ring is not truly silver, however, as it is a fragment of the Gatewarden's very soul. As such, it cannot be harmed by any known force, fading away only when the Gatewarden dies-presumably to join the soul from which it was separated.


Much of their history remains secret, as they prefer to leave mankind to their own devices. Regrettably, even events such as last year's War with the Rikti have been insufficient to bring them out of their self-imposed isolation. A true pity, as the Midnight Squad had attempted many times to recruit one of them, and their power would have made them a tremendous asset in the war-particularly in light of the final push to defeat the Rikti.

In late 2008, a man using the name "Scott Hunter" registered with the City Hall in Paragon City (and with MAGI in specific) as a hero taking the name "Gatewarden". It wasn't long before the mystical organizations of the city realized that this name was not taken as a lark, as Gatewarden made his reputation by opposing the Circle of Thorns and their demon summoning rituals. This caused a stir among the Midnight Squad as well, as they were familiar with the reclusive nature of the Gatewardens.

Gatewarden himself stated that his order regretted their inaction during the Rikti War-that it was time for them to assert themselves openly. He proved his dedication by expanding the scope of his actions to encompass the many villainous organizations in the city, not restricting himself to those who wielded arcane might. In recent days, other Gatewardens have been seen in the city, although with his known illusory powers, they may simply be disguises he is using. Or perhaps "Scott Hunter" is just another disguise by one of the other Points of the Pentacle.