He follows his father, but not with equal steps.
—Virgil, Aeneid (Approx 29–19 BC)

The Gray Huntsmaster was not originally intended to be tied to any of my characters; I felt that I'd played out the whole evil opposite concept; between Stellar Protector/Stellar Abyss and Amazing Kane/Devil's Chamberlain, I didn't have any desire to repeat. But upon pressure to come up with a Praetorian character for a Union Supreme storyline, I came up with the idea that perhaps instead of making the Praetorian version of a character, I could make a son of that character.... 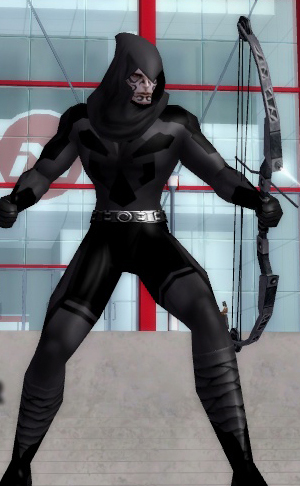 Riley is all about harnessed anger. He is angry at his father for his treachery and his failure; he is angry at the Resistance for trying to imperil the security of one of the last livable places on Earth. He is angry that he has to be the one to infiltrate Resistance cells in order to bring them down from within. Riley bottles this anger under a veneer of professionalism.

He does take pride in his successes, though. He's very good, he feels-and it feels good to be recognized for that work.

The Huntsmaster has no special powers in and of himself. Instead, he relies on assorted equipment to face the dangers of Nova Praetoria.

The Huntsmaster is an expert archer; while he may not be the best in Praetoria, he improves daily. He has demonstrated the ability to fire off a spread of arrows, or simply put a single arrow into a single body. He also fits on specialty arrowheads; one style of arrowhead is loaded with a concentrated napalm head, which ignites upon impact, while another arrowhead is loaded with explosive material.

The Huntsmaster also includes less lethal types of arrowheads in his arsenal, suitable to hinder or capture his enemies. At various times, he's used arrows that release a sticky glue-like substance that spreads all over on impact, which slows down the mobility of a group of targets; arrows that release a flash-bang that blinds groups of targets; arrows that release a compressed net over a target, entrapping them. The most advanced arrow freezes the very air around the target, putting the victim in a block of ice; however, the nature of the weapon helps in melting the ice rapidly, and it usually does not trap the targets for long.

The Huntsmaster does have an additional bit of equipment that assists him in travel around Imperial City.

A harness that Riley wears underneath his uniform allows him to accelerate his personal speed; he uses this to fire arrows at a rate that most normal men couldn't even comprehend. It also has allowed him to cross longer distances at blinding speed, faster than many vehicles.

Riley is a talented actor-sufficient to infiltrate Resistance cells and make them believe that he is sympathetic to their cause. He has enough mental discipline to keep mind scans of the Carnival of Light from breaking his cover.

Riley's anger is a useful tool in directing him towards targets one would wish destroyed. Provost Marchand has made use of this repeatedly in attacks on the Resistance.

Riley is not possessed of any superhuman toughness; cut him, and he bleeds. Stab him, and he will die.

Little is known about the Gray Huntsmaster, as most records were lost with the fall of the Magisterium. He was born to Thomas and Emily Riley, loyal citizens of Praetoria, or so he thought. He trained to be like his father, who had risen in the ranks-although not to the rank of Praetor. His father's ambition eventually led to treachery, and a public execution. This forced Riley to be better than good-so that no suspicion would fall upon him. He proved to be more than up to the task.

This brought him to the attention of Provost Marchand, who took Riley under his wing. Marchand told him that because of his father's treason, one could see it possible that Riley would make an ideal recruit to the Resistance. Marchand wanted Riley to accept any such offers, and work with them-and gather information so that when Riley revealed his true nature, the Powers Division would be able to wipe all of them out. Riley accepted, and was given additional training and equipment by the Powers Division. Then he was turned loose.

Riley was responsible for the elimination of no less than three Resistance cells, a testament to his work. Before another assignment, he was informed of an attack from a parallel Earth on the Lambda Weapons Facility. Images of the attack showed a familiar face-and an impossible one, because it belonged to his dead father! A call from Praetor Sinclair confirmed what he had seen: this man was the parallel Earth's version of Tom Riley. Sinclair gave Riley careful instructions: the opportunity would come one day, soon, to travel to this Primal Earth, and when it happened, he was to kill the Old Ranger.

Unfortunately, records end here. It is possible that the Huntsmaster was at the Magisterium when Emperor Cole destroyed it. Riley was not seen among the refugees who came to Paragon City; but neither could anyone confirm his death. It may be that he is quietly on the loose, waiting for the right moment to strike.

The Old Ranger supposedly has encountered his Praetorian duplicate once before; however, descriptions of that event are at odds with the reality of Nova Praetoria. This leads chroniclers to believe that the Ranger encountered a different Earth, and simply assumed it was Praetoria due to similarities in the nature of the inhabitants.