Yondu: We do not do that to each other. We're Ravagers, we got a code!
Quill: Yeah, and that code is "steal from everybody".
—James Gunn and Nicole Perlman, Guardians of the Galaxy (21 July 2014)

Voidjammer is arguably my first completely brand new character concept made for the Everlasting server-although in some ways, his origins came about because I really wanted to use the "Cosmic Corsair" costume set pieces for a character way back before City of Heroes closed-but since it was locked behind the ever-accursed lotteries, I had accepted I'd never get to use them. Funny how life works sometimes. 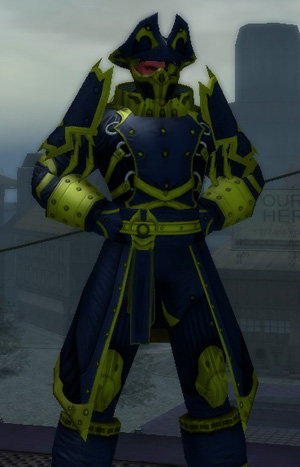 Ordinarily, Voidjammer is a jovial sort of pirate. He has a clearly defined sense of humor, and apparently possesses a great joy of life. But underneath that-and for a while shortly after his arrival on Earth-is a simmering resentment and anger towards the crew that marooned him on this planet, coupled with a desire to avenge himself on the same crew, in as unpleasant a way as he can devise.

Voidjammer's "powers" are a product of advanced alien technology. This allows him to go toe-to-toe with his enemies, or his friends, or really anyone who looks at him in a manner he finds displeasing.

Voidjammer is an expert in the use of handheld firearms. Unfortunately for him, the only ones he was able to keep after his crew's disagreement with him were a pair of Zorg X-85 Variable Pistols. These handy little weapons manufacture their own ammunition from various contaminants in the air, and can be voice-configured at need to produce inferno rounds, cryo rounds, or radioactive rounds. Of course, they can also be left as traditional little hunks of metal, which do a great job at causing harm all by themselves.

In addition to the guns, Voidjammer has other incidental bits of technology lying around that he can make use of. Tangle grenades are only the least of the tools at his disposal.

Voidjammer acquired not long after his arrival on Earth a working copy of a Nemesis staff. While it's not as utilitarian as his pistols, he's found it handy to put some space between himself and people who would like to do him harm up close and personal. Addtionally, Voidjammer has some additional useful tech from his time among the stars.

Voidjammer is missing an eye, which is usually compensated by technology-but it is possible to disable it. The same goes for a breathing apparatus that allows him to survive in Earth's atmosphere. If it were to be removed, he would begin to suffocate and likely die in an absurdly short period of time. The only place where he may remove it is on board his ship.

In addition to the above, he has his small spaceship available to him. It's restricted to being his current home, in a cloaked orbit around Earth. The ship has no weapons, and its ability to travel the stars is pretty much shot due to lack of fuel.

Voidjammer is a space pirate. Sometimes, stereotypes are true. After a minor misunderstanding that led to his crew deciding that a mutiny was the best way to increase their loot, Hahd-Jasar of the Voidjammer found himself with a small starship and a highly limited amount of fuel. The closest planet was in a backwater galaxy in a backwater solar system, whose inhabitants called the planet "Dirt". Well, at least until his trasnlation devices got it to properly translate it to "Earth". Now, Voidjammer is looking for alternative fuel supplies-and if he can find some hidden gems on this planet that makes his time here worthwhile, well, all the better!