OOC: This character was mostly created out of a writing challenge posed to the player by a friend. Of course, the project ended up taking a life of it's own after the player had the wise idea of having Ollie join an RP VG. Needless to say the player is happy with the results as people have taken a shine to this odd girl. NOTE: This character is officially semi-retired due to another alt taking up more time than expected...don't expect to see it update any time soon.

"When I despair, I remember that all through history the way of truth and love has always won. There have been tyrants and murderers and for a time they seem invincible, but in the end, they always fall — think of it, always."--Mohandas Gandhi

"Hatred stirs up strife, but love covers all offenses"--Proverbs 10:12 (NRSV)

A student of history and religion, Ollie is extremely unusual for a gang leader. Come to think of it, she never expected to end up in the position herself, but sometimes fate plays the cruelest tricks on the nicest people. Before she arrived in the Isles, Ollie was a quiet and studious person, spending her time either working on a graduate degree in History and volunteering at various charities around Paragon City. But when she turned 22, she suddenly started manifesting mutant abilities, causing the death of her boyfriend when her body started producing extremely potent toxins. Accused of having intentionally killed him, she was thrown in the Zig for murder, despite her protestations of innocence. While there, she started a gang mostly to protect herself from some of the more unsavory elements of the prison population. This action caught the attention of Arachnos, leading to the Spiders freeing her during one of the mass break-outs that they regularly stage. Since arriving in the Isles, she has started working with a group of mercenaries known as the Iron Wolf Cartel in the eventual hope of going home. After a couple months of this, she recently has popped up in Paragon as a teacher at a small private college, though her criminal record as a freelance agent with the Cartel is still around and may prove a hindrance in her interactions with some of her more upright students. Rumors about her engaging in unlicensed heroics seem mostly unfounded as the rumors have her throwing around bolts of light, a power most of her associates know she doesn't have.

The best way to describe Ollie's personality is odd. She is a very protective person who constantly worries about her friends even if they don't really see the need for her concern. Ollie is not overly prone to physical contact, but that hides the fact that before she could kill with a touch, she was always the one giving her friends hugs...a marked contrast to the person who now is getting used to being able to do that again. Another odd quirk about Ollie is she is a devout Christian despite the fact that she has experienced so many misfortunes in her life. She is also easily embarrassed about some subjects (sex and her appearance ranking fairly high on that list), which is a source of endless amusement among some of Ollie's friends and associates. Ollie only has two major phobias: vampires and failing her friends.

A truly mixed blessing, Ollie's body naturally produces a neurotoxic cocktail, which in very diluted forms can produce effects ranging from extreme weakness to total paralysis. For most of her adult life, Ollie has had a very interesting time controlling poison the secretions, having lost total control for significant periods of time. Also of note is the fact Ollie has discovered how to "throw" non-lethal doses of poison over short distances and use what she calls her 'kill or cure' technique, which pumps an unconscious body full of a mix of potent stimulants and has the unfortunate side-effect of causing vomiting and massive indigestion.

As Ollie frequently explains to people, her wings aren't just for show. They actually allow her to fly, so long as she remembers to eat decently well before doing any long haul flying.

One of Ollie's better kept secrets is the fact that for the past couple of months she has been playing host to a Kheldian...mainly because Ollie herself didn't know. After a recent series of absences, Ollie came to realize that the voice in her head wasn't her slowly becoming schizophrenic but rather a Kheld that called itself Michael. Michael explained to her that when Ollie was in the Warzone, she nearly died and his previous host had died. Seeing the unconscious Ollie surrounded by Rikti, Michael took the only course of action that would save both him and the life of the supposed villain that had been trying to help out his previous host. Unfortunately Ollie doesn't remember this ever happening, and as Michael had expended a good portion of his essence fighting their way free, the Kheld decided that it was best to let Ollie live a semi-normal life for a while and gauge the girl's potential. Needless to say, with the Kheld's recovery, Ollie recently has popped up in Paragon as an unregistered hero, lending aid where she can. She has learned a few of the more basic skills, such as the bright nova form, and hopes to show her friends her progress...eventually.

Ollie is a mostly self-taught shooter, but is a decent shot even considering her usual load out is a pair of pistols. As Ollie prefers to avoid killing at all costs, her normal ammunition are custom Armour-Piercing (Non Lethal) rounds, but she does carry several types of specialty munitions for dealing with things like demons, ghosts, and the like. The pistols she has access are the Webley Mk. VI Revolver (a WWII-era break-top revolver firing .455 ammunition), the Colt M1911A (another pistol that tends to be associated with the Second World War, a semi-automatic firing .45 ACP), and an antique pearl-handled revolver (probably a Colt of some variety, but as of yet Ollie has yet to get the weapon identified).

Ollie's cybernetic eye is a custom built job that replaced an eye she lost when she was trying to protect a friend. The eye is well built with several useful features (ranging from IR sight to a smartgun system which Ollie refuses to use) but the interface between cybernetic and brain is unusually sensitive to high-frequency sonics, probably related to Ollie's mutation.

Recently Ollie lost her right arm in a fight and had a replacement built by a member of the Cartel. The arm is built from salvaged Rikti tech and is powered by her Kheldian symbiont, giving it a unique resistance to EM radiation. She has yet to fully test the limits of the arm, but the covering on it can be replaced by a synthetic skin that gives her full tactile response.

Ollie's armored everyday wear is a result of an incident in the D that nearly cost her life and took one of her eyes (see the Cyber-eye for more specifics on it). Essentially a super-strong yet flexible polymer weave, Ollie's clothes offer protection equivalent to a Kevlar vest while being a whole lot less restricting than Kevlar. This protection has proved useful on the field but it cannot stop anything from some of the larger types of rifle cartridges.

(If you want to be added to the list, just put your name on the list and I will fill in the rest)

(If you feel you aren't quite Ollie's friend but know her, put your name here)

(And if you know you have Ollie's eternal hatred, well...your name goes here)

Inspirations (i.e. what are the influences of the character)

Ollie started out simple enough in premise: a wrongfully convicted mutant, thrown in prison and gets broken out and spends time trying to find a way home. But when this elevator pitch proved to not be enough for a solid RP character (big surprise there), the player started evolving the character using a rather odd and diverse set of influences. They range from Susan Ivanova and Honor Harrington to Terry Pratchett and the player's friends (most of them nerds with a wide variety of trivia at their disposal). The decision to make Ollie have an interest in Jewish traditions and speak German came from the fact that the player shares these interests, as did most of the politics. 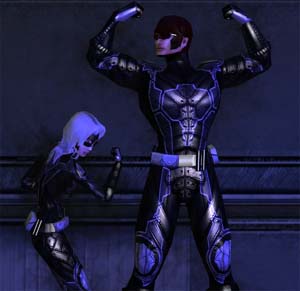