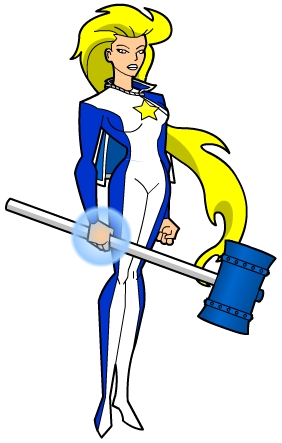 Lucy Coleson, aka Bright Hammer, operated as a superheroine in Central America during the period 1930-1950. She worked alongside such superheroic luminaries as Xanatos, The Golden Knight, Visor, West Wing, Springfist, Greenbeard, Mr. Purple and many other members of the golden age supergroup known as the Cosmic Crew.

Bright Hammer possessed no superhuman powers of her own. Though she did own an ancient robotic hammer of alien origins and superhuman proportions. Almost three and a half feet in length, the massive hammer granted its user superhuman invulnerability and strength. In addition, the hammer can be used in an offensive capacity by any strong enough to wield it.

Bright Hammer takes her name from the side-affect of using the hammer as a weapon: upon striking a foe, the hammer emits various sparks of energy which are bright blue in colour. This causes the opponent to be stunned long enough for Bright Hammer to subdue her foes by non-lethal means.

It was in 1950 that Bright Hammer was killed in action against long-time enemy Requiem on board a military submarine. The submarine would later serve as Bright Hammer's tomb, as it sunk to the bottom of the ocean after the battle that claimed her life.

While she was alive, Bright Hammer was the romantic liaison of team-mate West Wing.