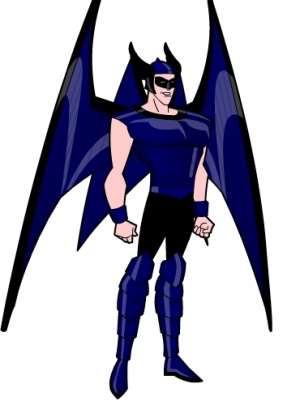 Andrew Bird, aka West Wing, operated as a superhero in Central America during the period 1930-1950. He worked alongside such superheroic luminaries as Xanatos, The Golden Knight, Visor, Bright Hammer, Greenbeard, Mr. Purple, Springfist and many other members of the golden age supergroup known as the Cosmic Crew.

West Wing's primary power is that of natural flight, due to his large mechanical wings & metallic skeletal system. (Both of which are of Alien origin.) His wings have superhuman strength, and they have a very flexible mechanical structure that enables him to press them to the back of his torso and legs with only the slightest bulge visible under his clothing. His bones are metallic & hollow, his body processes food more efficiently than a normal human body and does not store any excess fat, he possesses a greater proportionate muscle mass than normal and because of that his strength, speed, agility, endurance, reflexes, eyesight, and hearing are at their peak. Elements of his anatomy are comparable to those of birds. His superhumanly sharp eyes can withstand high-speed winds which would damage the average human eye. His lungs can extract oxygen from the air at high velocities or altitudes, and he can cope with the reduced temperatures at high altitudes for prolonged periods of time, giving him a greater-than-normal capacity to endure low temperatures in areas such as the Arctic.

West Wing left The Cosmic Crew in 1950, following the death of his team-mate and romantic liaison Bright Hammer. It is believed that he destroyed the mechanical wings and enrolled into the Paragon City Police Academy. West Wing is believed to have died in 1955 while undergoing surgery to remove the metal from his skeletal system.