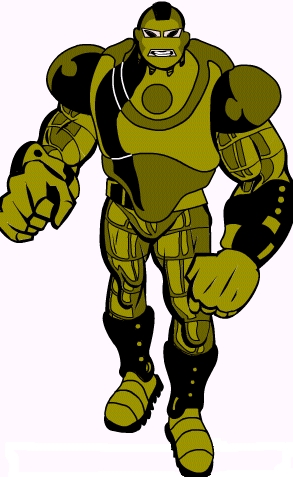 His real name unknown, The Golden Knight operated as a superhero in Central America during the period 1930-2002. He founded and ran a supergroup known as the Cosmic Crew which consisted of such superheroic luminaries as Xanatos, Visor, Bright Hammer, West Wing, Springfist, Greenbeard, Mr. Purple and many others.

The Golden Knight draws his powers from a suit of alien origin he discovered in 1925 in the Antarctic. It is immensely powerful and seemingly invulnerable to all harm; a clear limit to his powers is still unknown. Thanks to his suite, The Golden Knight has complete awareness of and control over atomic and subatomic particles. He can alter his body's size, coloration, density, and strength. He does not appear to age, need food (although he is shown to eat regardless of this), water, or air, and is, for all intents and purposes, immortal. He can teleport himself and others over great (even interplanetary) distances, but the exact limit to the number of people other than himself he can teleport at one time or the distance he can teleport them is unknown. As an example of his ability to change his size to gargantuan proportions, The Golden Knight once grew up to three hundred feet in height. This was in 1960, during a hostile battle between The Cosmic Crew and Galarius.

The Golden Knight was the founder of, and mentor to all members of, The Cosmic Crew. He personally trained the rookie alien hero, Xanatos, after first meeting him in 1940. The two heroes would become close friends, fighting many super powered villains over the years. During this time it was The Golden Knight who taught Xanatos what it meant to be a hero, and it is he who is considered by many to be directly responsible for Xanatos's propensity towards mixed oaths and dated language. Despite having fought by Xanatos' side for over sixty years, Xanatos never once saw The Golden Knight out of costume, even on social occasions.

In 2002, At the Age of 103, The Golden Knight donned his armour for the last time and disappeared into the night.

He has not been seen since.