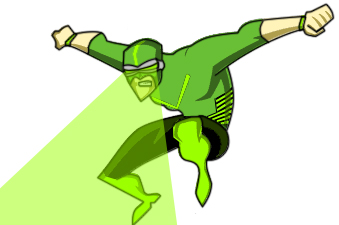 John Carlton, aka Visor, operated as a superhero in Central America during the period 1930-1960. He worked alongside such superheroic luminaries as Xanatos, The Golden Knight, Bright Hammer, West Wing, Springfist, Greenbeard, Mr. Purple and many other members of the golden age supergroup known as the Cosmic Crew.

Visor has the power to emit beams of energy from his eyes. Although the beams have the appearance of green light, they do not heat objects but instead deliver tremendous concussive force. Some accounts describe Visors' eye beams as the product of his body metabolizing sunlight and other ambient energy and releasing this energy in the form of beams. Visor himself has suggested that his powers are mechanical in nature, powered by the technological visor he is seen to be wearing at all times. Whatever their exact source, these beams are tremendously powerful, able to rupture steel plates and pulverize rock. Visors' beams have also been demonstrated to reflect off certain shiny surfaces; in concert with Visors' intuitive sense of spatial geometry, this reflective quality of his beams allows him to bounce the beams off many different surfaces in rapid succession so as to strike a desired target from an unexpected angle.

Visor was killed by the intergalactic demi-god Galarius at the height of the cold war in 1960. He had no children nor protege heroes, so his legacy died with him.