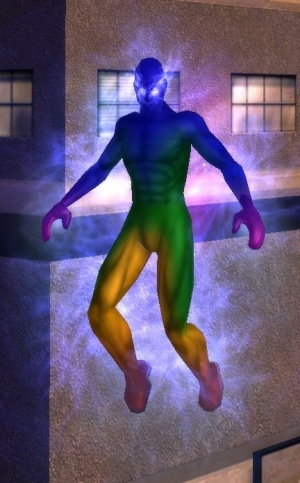 Jack Mission, the eldest son of Doctor Tobias "Toby" Mission, was working on various projects for SERAPH when he made an incredible discovery. Discovering some unique energy signatures of the Kheldian energy beings, he was able to artificially recreate the powers similar to the Kheldians.

Now able to harness energy like the Kheldian energy manipulation powers, Jack created the costumed identity of Doctor Spectrum. Wanting to utilize his new powers for the greater good, Jack sought a group of heroes. The Union Supreme fit his parameters of global reach and the good exploits he had read in the Paragon Times. After an initial trial period, Jack has been a devoted member of the Union Supreme, helping the people of the world overcome the darkness.

Jack Mission is eager and bright, always taking glee in trying to solve a new problem.

Jack is a little insecure, especially since he is learning how to use his powers. He tries to continue to do what he feels is best, to make good out of bad situations. While he might feel insecure at time, he is unwavering in his belief of doing good to make a better world for everyone.

Doctor Spectrum has the power and ability to freely control and manipulate light for a variety of purposes. He can bend the light around him to become invisible, generate blasts of glowing energy, create glowing force fields and fly. By mentally attracting photons, Spectrum can create areas of intense brightness, blinding and stunning people.

Jack is a talented scientist, having many areas of general knowledge, but specializing in Optics and Physics.

Suffers from Nyctophobia (Fear of Darkness).