Jane Smith was just an ordinary girl in a dead-end job on the bad side of town. One day, while going to the bookstore to spend the last of her tiny paycheck on manga, she found this manga she'd never heard of, Plum Whine, a magical girl manga about a purple and red-clad super hero who could sing to defend the universe from evil. How Jane wanted to be like Plum! She closed her eyes and held the book to her heart and suddenly she smelled something sweet, like plum blossoms, and when she opened her eyes, she was a super hero! With super awesome singing powers. And of course gadgets!

Plum visits the D a lot with her friends. She's pretty friendly and loves to chat with random people, imagining the worlds they come from. They all sound so fascinating! She loves to talk but tends to not contribute anything useful. She's a comic relief, mostly, but does like to keep the conversation happy and in high spirits. Why not? They're all super awesome superheroes after all. They get to fight aliens, help cure diseases, and clean the scum off the street.

Two Sides of the Same Coin

Plum and Jane are opposite, almost as if there were two different people involved, but truthfully, one is the insecurities and the other is how the first wishes to be. Neither side is very bright (except when it comes to art and knowledge of manga) and both can be incredibly animated when talking and moving about.

Plum is incredibly outgoing and likes to run into things head first, sometimes without thinking it through first. She loves to help people and beat the bad guys into the ground (perhaps too much, sometimes). She'll willingly take on bad guys by herself and when with a group, she'll do everything she can to help out her teammates. Unfortunately she will sometimes end up on the front lines then get kicked in the face for doing so.

Outside of battle, Plum is outgoing and cheerful. She doesn't often have anything worthwhile to contribute to conversations, and much of what she says comes across as comical or nonsensical. Plum is almost always chipper and cheerful, and otherwise she can be a bit melodramatic at times. She does her best to help people get along and keep the mood bright and cheerful. Whenever she leaves a group, she always leaves with "Plum away!" and often jumps whenever she travels.

Jane is almost completely opposite. She is usually keeps to herself, wanting to join people but sometimes too embarrassed to do so. She's most often seen reading manga or drawing off by herself, though she has made appearances at the D albeit rare. The only time anyone has really seen her more outgoing self come out is when she is discussing manga or anime, particularly when she's at work as work doesn't make her feel awkward and misplaced.

Jane really was nothing special. She was born into a rather poor family and several siblings soon followed, leaving her the oldest. Everything was peachy for a few years until her parents began fighting. They fought over finances and the kids, mostly, but as the years went by, the fighting started over little things, like the lack of dishes or not getting beans from the store. Anything really. Problem was, neither had enough finances to afford living alone or afford a divorce filing, so they simply stayed together.

Jane grew up with the fighting. It was a pretty normal occurrence, and she'd learned very well how to tune it out as well as tune out her bratty siblings. She turned to food and manga borrowed from the library to help with the stress and gained a lot of weight. She furthered herself from her classmates, burying herself in her books, and her grades got worse. It didn't really help that Jane was never a strong student in the first place. She only excelled in art. The rest she was mediocre. She soon developed a desire to be a comic artist.

At 16, Jane found her first job to help the family get some money. It was a terrible job, working in a video store where the manager constantly insulted her appearance. It was a dead-end job, but it helped where it needed. She squirreled away some of her paycheck to feed her manga addiction and often frequented a local comic book store where she purchased all of her books relatively cheaply. She got to know the staff there and chatted with them about manga and comics all the time, admiring the heroes within the stories. 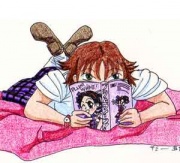 Jane reading the Plum Whine manga which gave her magic
A year later, she found an unusual manga on the comic store shelves called "The Magical Plum Whine" that just seemed to call out to her. She flipped through a few pages then took it to the counter. The guys behind the counter shrugged, not knowing where it came from and they let her have it. After all, they couldn't charge her for something which didn't appear in the inventory. She shoved the book into her backpack and headed home, and that's when everything fell apart.

While reading the new manga, she overheard her parents arguing how they couldn't support the kids and they were failing school anyway. She wished she could just be a super hero like Plum in the manga. Everything would just be better that way, wouldn't it? No more listening to the arguing, no more feeling like she was the root of the problem. So she packed her bags with manga and some clothes and simply left.

She stood outside the train station, ticket less, still holding the manga, wishing everything could be better. She closed her eyes and sighed, but then suddenly smelled something really sweet. A warm feeling came over her and when she opened her eyes, her appearance had completely changed. She looked like a magical girl, pretty, and dressed nicely. At first she thought it was a dream, but no matter what she did, she didn't wake up. She was already awake.

But a magical girl must have magic, shouldn't she? She tried out a few things. Nope, no flying. No magical bolts. No strange psychedelic rainbow attacks. She let out a heavy sigh and that's when she found she had vocal magic. That was pretty cool. But did New Hampshire really need a singing hero? Probably not. That's when she discovered a card in the back of the book. "Pocket D VIP Pass."

And with that pass, Jane disappeared from New Hampshire.

Jane moved into Paragon City into a small, rather shoddy apartment by herself, but it was her own, and registered for school. With her extensive knowledge of manga, she had no problem getting a job at the local manga store during the day. In the evening, with a magical salute, she became Plum Whine and started her career as a hero in Paragon City.

Jane created a whole alter-ego for herself, one that was elegant and strong and chipper. There wasn't anyone who could recognize her, as her super hero appearance was completely formed by magic. She didn't look like Jane at all. Jane took on the name, Plum Whine, from the manga she had found at the comic book store. It worked, after all, as she wore a plum-colored outfit.

Despite her enthusiasm, Plum wasn't that great with her magic. Some heroes had been doing it for years. She'd had her powers for days. Being a hero wasn't as easy as manga seemed to portray. She frequently found herself missing and in trouble. Fortunately she encountered several other heroes - Eli, Jayden, and Sky - to team up with and she soon gained more control over her powers. She grew quite close to them and they frequented Pocket D together, watching the people and drinking soda.

To keep this page easy to read, continued here.

Quick notes about both sides of Plum

Lulzy and derpy things that keep happening over and over for some mysterious unknown reason.

Plum and her BFF Jayden

Plum is pretty much your standard otaku, listening primarly to J-pop and anime themes, as well as drooling over GACKT.