Roll of the Dice

50
Roll of the Dice
Bad Luck 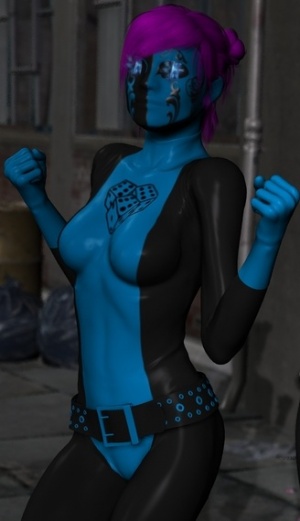 (Marianne's full history can be seen here. This area is the cliff's notes.)

Marianne Gravois is quite literally the luckiest girl in the world. A self-trained sorceress, Marianne has the incredible ability to manipulate probability itself - granting "good luck" to her allies and cursing her foes with misfortune, she can swiftly turn the tide in any battle!

Mostly, though, she uses her incredible skills for gambling and thievery. A former Arachnos Fortunata, Marianne uses her precognitive psychic ability, luck magic, and stealth and acrobatics training to be - as she claims - the best cat burglar in the world. Having stolen countless priceless art pieces, ancient artifacts, and magical trinkets, Marianne sits atop a widely coveted hoard of valuables - and a respectable bounty, too!

Marianne is the leader of the secretive Thieves' Guild, a VIP of the Siren Chorus clone army, and a member of the Judex organization's "Sword of Nemesis". Although she prefers to stay in the shadows, unnoticed by powerful heroes that could put an end to her life of crime, she may soon be forced to step into the spotlight.

...She might not mind the attention all that much.

What makes the vanity of others insufferable to us is that it wounds our own.
- François de La Rochefoucauld

Since she was able to form a coherent sentence until she left Arachnos, Marianne was trained to be the best at whatever she did - and she often was. From athletics to academics to psionic training, Marianne excelled her peers in the Fortunata training program. This natural talent and precocious success, however, resulted in a massively inflated ego and an obsession with perfection.

Marianne is obsessed with herself, and - in her mind, at least - she has to be the best at every single thing she tries, no matter how minor. Marianne loves to compete, and although she's a gracious victor and comes off as being a relatively good sport, she can't handle losing any sort of competition, be it a sparring match or a game of checkers. When she loses, she's quick to claim that the victor is somehow cheating, and nearly as quick to demand a rematch.

Marianne not only demands perfection from herself in her actions, but also her appearance. She will compulsively inspect herself if she ever sees her reflection, straightening hair and adjusting clothes for a flawless look. A good way to make Marianne's indignant temper flare up is to somehow imply that she's dressed poorly for the occasion, or - even more infuriating for her - claim that some part of her body itself is noticeably flawed.

Marianne has few friends; her egotism, abrasive personality, and criminal line of work don't help a whole lot when she meets new people. However, if someone is able to tolerate her snotty behavior and impress her enough, she will become a loyal friend - or lackey, depending on how charismatic that someone is.

Although Marianne's most recognizable "power" is her so-called 'Luck Magic', it's actually her natural talent with handling and channeling the power of magical artifacts that grants her access to such potent abilities.

Marianne can use any magical artifact or device as intuitively and skillfully as if she had taken weeks or months studying its effects and practicing with using it. As soon as her fingers touch the surface of the ensorcelled object, she has near-perfect understanding of how to safely operate it.

This ability becomes more potent the longer Marianne possesses an item. After an artifact has been in her possession long enough, its capabilities will slowly begin to increase: an amulet of disguise, for example, will slowly gain the ability to truly shapeshift its wearer, although this ability will vanish if the amulet is used by another person. After extremely long periods of time - usually months or years depending on the item - Marianne can actually trigger the item without even having it on her person. Currently, the only artifact that Marianne can perform this trick with is her signature device, The Dice.

Marianne was born with notable psionic potential. Although her telekinetic and telepathic abilities are rather limited - Marianne can detect lies, "hear" surface thoughts, and lift about 200 pounds - her precognitive abilities are far above the average psychic's. While many precognitives only see the future in sudden visions or through intense concentration, Marianne is always looking at least a few nanoseconds into the future as a subconscious action. With minor concentration, Marianne can peer into the future and view an infinite number of possible futures, select the most likely ones, and deduce which actions she needs to take to make that future a reality.

However, this power comes with a cost. Marianne is plagued with headaches, nightmares, random visions of apocalyptic futures and her own death, and severe mental fatigue. While her constant future-gazing state is a subconscious action for her and makes actual foresight almost effortless, it is extremely distracting and challenging for Marianne to distinguish between the future and the present. Although her stubbornness, obnoxious confidence, and the liberal application of painkillers usually hide the less-than-beneficial side effects of her precognition fairly well, she is almost always suffering from these maladies.

Without her Artifact Aptitude and Precognition, Marianne would have little to no control over The Dice. By amplifying the normally-modest powers of the Dice, she has created a device that can cause untold injury and destruction to herself and her surroundings, and only her Precognitive skill allows her to direct and modulate her "Luck Magic".

Greed often finds more pleasure in taking from others than in giving to itself.
- Simon May

The Dice languished for years in the display cases of many an unsuccessful magic shop until Marianne came across them while she was still in training as an Arachnos Fortunata. Using her foresight and stealth skills, she stole the Dice after she was denied purchasing them by the owner of the shop. Although they were little more than a pair of minor luck charms when Marianne first stole them, over the years her Artifact Aptitude ability has amplified their capabilities far beyond what they were originally intended for.

Originally a simple pair of ancient, enchanted dice that granted the bearer unusual luck in traditional gambling games, years of contact with and use by Marianne have empowered this trinket to levels unimaginable by the artifact's anonymous creator.

Simply put, the Dice give Marianne the ability to manipulate probability. She usually channels this power subconsciously, giving herself a constant blessing of "good luck" - rendering her effectively immune to disease, stubbing her toe, and other embarrassing situations.

Marianne can also actively direct the power the Dice grant her to create chaotic blasts and waves of dark energy, which viciously randomize anything they come into contact with. These "dark blasts" also tend to inflict further bad luck on their victims, causing armor to crack, invulnerability fields to waver and fail, and cursing the victim with terrible aim. Some victims have even reported their clothes and hair spontaneously combusting.

Marianne can also alter probability to grant her allies good luck: bullets and blasts will whiz harmlessly past them, they'll find themselves with nearly unlimited stamina and a near-precognitive reaction time, and - when she's feeling especially charitable - Marianne can even reverse their wounds, invoking the opposite effect of her "dark blasts".

An artifact that allows Marianne to manipulate ice and cold and resist temperature extremes. Using this artifact, she can lower her body temperature to below freezing, summon snowstorms to slow and distract her enemies, and even encase herself in a block of super-dense ice that renders her nearly immune to harm.

Marianne gets a kick out of using this artifact near superhumans with Cold-based powers, often gloating at their dismayed reactions to their ice "betraying them".

Marianne has a prodigious collection of minor artifacts that she's stolen or had created for her. The most prominent of these is her belt - although it appears to be a simple accessory, it grants her access to a pocket dimension that can hold up to 400 pounds of material. She uses much of this carrying capacity to store a plethora of useful trinkets that she's empowered with her supernatural talents. Marianne has an answer to hundreds of problems in the form of enchanted devices available to her with a flick of her wrist.

((OOC Note: Don't worry, she doesn't have Dice-Shark Repellent. I try to keep this reasonable.))

"She has an awfully loud mouth. I like it." - Seismecca

"I heard about you. Maybe it's time to lock you up for good, yeah?" - Risk

Marianne is not quite as popular as she might think she is.