((Section for IC opinions and thoughts on Robin, because I am a pompous egomaniac. Add away!))

"Ah, Pocket D's beloved man-whore. Rumor has it that he's some kind of big-time thief, but the only stealing I've seen him do is the stealing of hearts. I love you, you adorable little care bear. You're just mixed-up kid." Codename Champagne

"I dunno what th'fuck's up with 'im. One minute he's a fuckin' dick, th' next he's chillin' out, an' is actually kinda awright t'me. S'been back'n forth fer awhile... sort yer shit out, Robin." - Raine Heartfall

"Queen Robin, it's hard to really gauge him at any given time. He's got potential, yeah, but his mouth gets ahead of him. I stabbed him once... or twice. Maybe a few times, but... he'll come around." - Eve Summers

"He reminds me of another dumb kid I knew once with a bad upbringing and a stutter. Lost, confused, an emotional wreck going in no particular direction at all. Myself. He has all the potential in the world, if he'd just find his center. I'll be here till he does. I promised Paola I'd watch out for him. I keep my promises." - Adam Michael Fairfield "Moone"

"Beloved Robbie, as much as I want to give him a hug, I want to smack him across the room for being purely an idiot. But you can't expect a boy to become a man overnight, and I give him credit as much as I can...Maybe one day he'll stop bed hopping and grow up. And I say that in the most loving, nicest way possible." - Satine Dubois

"He's my brother. Funny thing that comes along with that title is a sort of crazy loyalty. Sure, beat the shit out of him. I'll probably help. Or at least stand by and watch. But you try to kill him or take him away from me and you'll have a fireball up your ass so fast you'll be coughing smoke before it even happens." - Ani Reaves

"Robin's a sweetie who gets himself into lots and lots of trouble...it's not his fault; people just don't like him for their own stupid reasons...but he's a snuggly kitty of loving." - Purge Initiation

"Largely vulnerable if you get him out of his suit. The suit itself absorbs electricity. Breaking part of it may create a weak point." - Clerisy

"I don't know exactly why all these fuckers like picking on this bitch, but he was the Ragtag Rogues punching bag first, so all you booze sucking dick dweebs can fuck yourself with a lit piece of dynamite." - Kenny B. Tanto

"I gotta say, I love Robin with all my heart." - Anna Crane

"Robin is a good friend . . . I would gladly kill for him." - Cassandra Lance

"Someone once said 'If you can't say something nice, don't say anything at all.' Well alright then." - Samuel Cooper

"Robin, Robin, Robin. One moment the guy's annoying the fuck out of me, and the next he's making me laugh. I don't really know what to say other than that. At least he's coming from a good place..... Right?" - Clara Su'cour

"I AM GOING TO KILL THIS MOTHER****** SO ******* HARD. JUST YOU WAIT, YOU SON OF A *****. ONE OF THESE DAYS, I'M GOING TO FALL FROM THE SKY SPECTACULARLY WITH THE SUN AT MY BACK IN A BLINDING AND BRILLIANT DISPLAY, AND DECAPITATE YOU SO HARD, YOU PISS YOUR PANTS FROM THE AMAZING **** THAT JUST HAPPENED, AND SO HARD THAT YOU DIE. AND THEN I'LL KILL YOU SO HARD YOU DIE. And I don't love you. *pout*" - Operative Lucenia

"Robin? *Laughs, smiling* I love him. Without a doubt, one of the people I'd do nearly anything for. You know, if he'd let me. Really good to lean on, really good to talk to, really good for an ego boost, too." -Jo 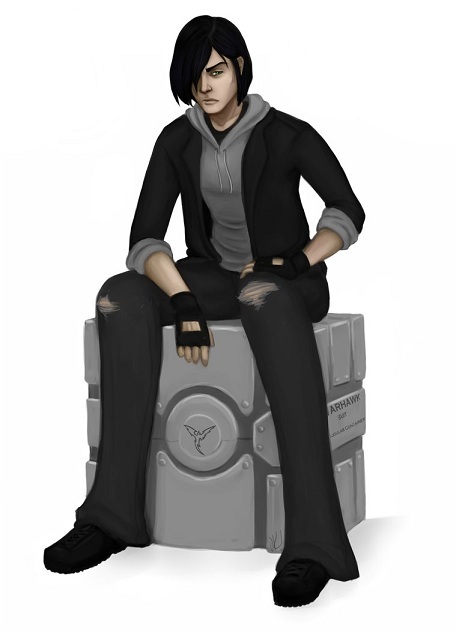 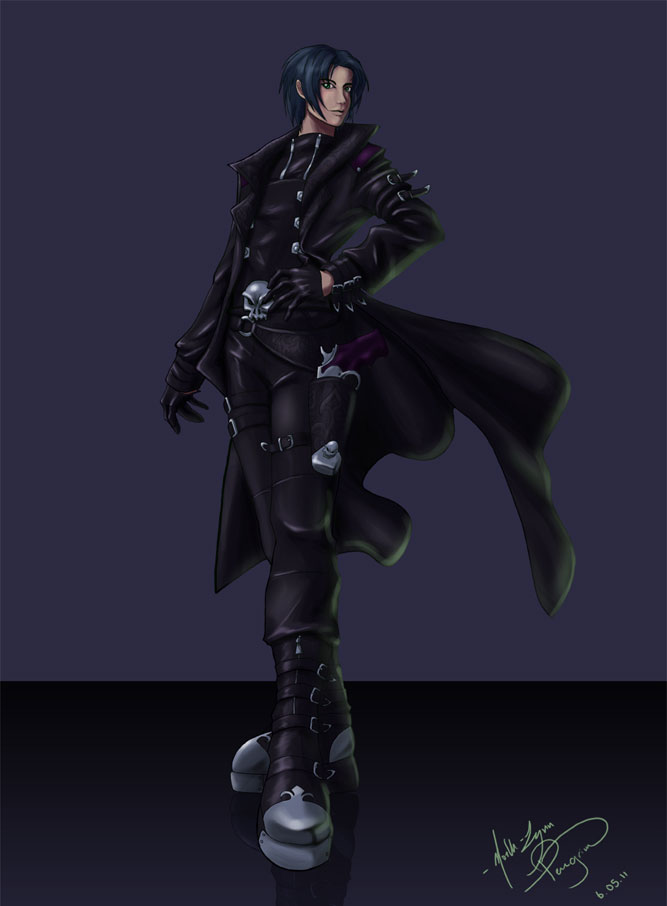 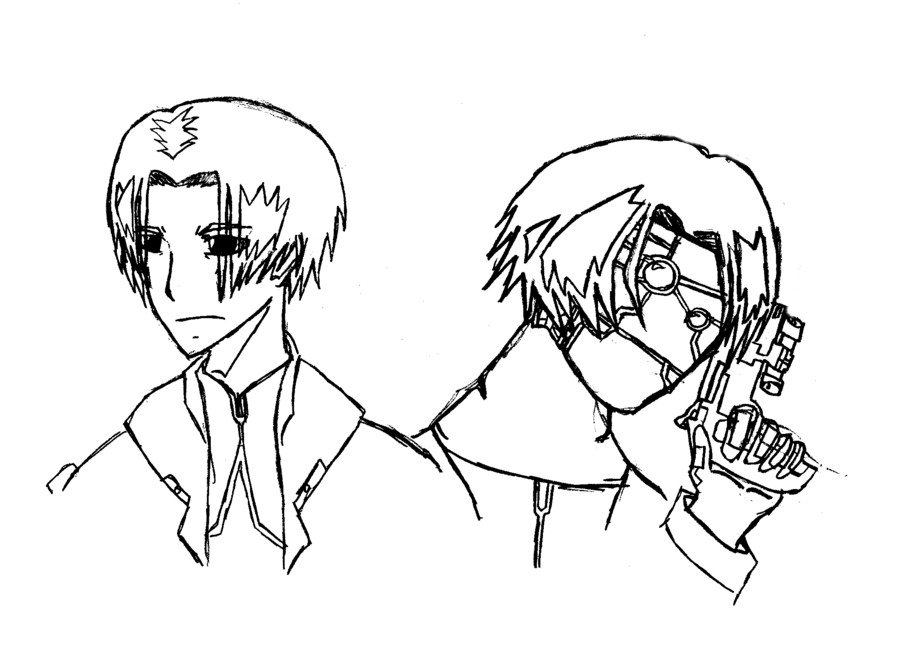 A six foot three figure towers over the average human, two deep green eyes often gazing about the room almost idly; seemingly natural black hair frames his face, wild and almost wavy locks that often find their way over his eyes distractingly. He has features that can only belong to that of a 'pretty-boy', with boyish good looks and sharp features that people may consider attractive. His face is kept clean of facial hair or blemishes. Neither too slim nor overweight, he is actually surprisingly well-toned and somewhat muscular, having to be in shape for his 'profession', which -- if one couldn't guess by his armor-plated leather apparel, the various chains and skull emblems and designs along his almost gothic attire -- he may very well be a thief or some sort of criminal.

He has an intricate red-and-gold bird with flaming wings, and blue eyes and detailing on his left shoulder, exposed near the top of his chest. This beautiful work was done by Esh, and was recreated to cover over his cybernetic arm when his human limb was lost.

His body is littered with scars from nearly head to toe, varying from big to small to every sort of scar in-between. Years-old bruises, gouges, gashes and cuts are a living cartographic of Robin's struggles to survive as a youth.

Most people don't realize Robin is a cyborg. His left arm was replaced at the bicep when Web and Xrell teamed up to take down Robin who -- while he'd never admit this -- had gone absolutely psychotic, turning on his own friends and hurting several of them ... including Naomi and Fen. In a drastic move to stop Robin from hurting anyone, the demons broke Robin's left arm and tore it from the rest of his body. Although it's been replaced by a high-tech prosthetic, Robin uses synthetic muscle, artificial nerves, faux skin and hydraulic oil disguised as blood to make it look and act like the real thing.

Robin's powers are limited to what any other human can do. Although he is gifted in terms of intelligence, that doesn't go very far against superpowered and supernatural beings. To survive, he employs the use of incredibly advanced technology.

Robin is unusually intelligent in spite of how he may come off at first impression. Some think it's an act to distract from any idea that he is, in fact, a capable fighter and serious threat even to supers. He has constructed a veritable army of robots, ranging from assassin droids with cloaking devices and hologram projectors to tactical assault units armed with weaponry deadly enough to level a skyscraper; to guardian units that can patch up organic and mechanical targets and apply force fields and stunning shots, to a titanic twenty-plus foot war machine armed with the kind of firepower that can stand toe to toe with Malta titans. Each bot is, by default, armed and capable of a slow form of self-repair through either a special chemical foam that bridges damage in metal architecture or through nanotechnology. An advanced A.I. that is borderline sentient is equipped to each of the machine's mainframes, which are typically located in different areas depending on the series. They are so advanced, in fact, that people commonly mistake them for being self-aware.

The "Metal Raven" Powered Armor Suit is a combative powersuit designed to be able to take down a variety of opponents. Decked out in padded rubber insulation, inches-thick impervium-titanium composite alloy plating, and many, many weapons, it's able to directly withstand direct blasts from rockets, missiles, and energy blasts, as well as shrug off certain degree of heat, operate in extreme cold and tolerate low-to-medium caliber ballistic munitions. Its most deadly and glaring weaknesses are antitank weaponry, extreme heat, and stopping the suit from any sort of movement (its kinetic battery will run dry if it can't charge itself through combat or movement or otherwise kinetic action).

Its targeting systems are top of the line, deploying the use of an advanced HUD system with a voice-activated command center and synaptic pattern scanners on the inside of the helmet -- it can literally read his mind and initiate commands, attacks, or tactics solely based off what he is thinking at the time.

It operates off a kinetic battery rather than electronics, able to tolerate E.M. pulses. The biggest drawback is if the suit can't move at all, it can't generate power.

Robin employs the use of his own designed micro-nanites, that do anything from repair his bots, to heal the wounds of himself and allies. It can even swarm and slow opponents, blind them, attack them, stealth-cloak he and his allies, and other useful things.

Robin has a flight system that is relatively simple. His boots act as robotic jet boosters, and he equips thrusters on his palms that help him control his flight speeds and path.

Most every normal human weakness and limitation affect Robin.

Robin has acquired many handguns, both for collective and offensive purposes; he always keeps at least one handgun on him at all times. Usually, two, and on occasion a third, smaller pistol.

Robin, being the paranoid bastard he is, stores a lot of ammunition. Lined down the inside of his jacket tend two of each special ammunition for the FN Five-seveN, four standard 5.7x28mm magazines for the firearm, and two standard SIG .357 magazines for his SIG Sauer P228 (as well as at least three magazines for his Glock and typically two or more for his 1911). In pouches, he keeps about two moon clips handy for his custom Smith & Wesson revolver. After a battle, he always heads home to replace lost ammunition. His guardian units often carry racks of ammo on their backs. For some reason, he carries magazines for a Glock 17c, but it's only been seen on him once or twice.

Robin is a bit of a kleptomaniac. He controls himself in public... but amidst bank robberies and the likes, he will steal small or inexpensive things that catch his eyes. Sometimes, he'll nab expensive things that will fit in his pocket - even the diamond ring right off a hostage's finger! Any cheap, easily attainable valuables (or non-valuables...), from coffee mugs to fancy potted plants, will be nabbed.

Robin is rumored to be nearing multimillionaire status. Not surprising, considering how often he robs banks and rich citizens of the Isles. It may just be a rumor, though.

Robin is extraordinarily good at playing piano and has a good singing voice. He seems musically inclined to begin with.

Robin hates giving in to 'the man', so he doesn't buy any mainstream products where avoidable ("Apple rhymes with ASSHOLE"). Or he steals them.