Friends and Loved Ones

(A section for thoughts on Aki. Add away.)

Aki's been one of my closest friends for the longest time. She's helped me whenever I've called, and I've always done the same for her when I could. At times... I worry her obsession with her father will eventually cause her to become a mirror of him. And I just try my best to keep her on the right path. - Brian Troy 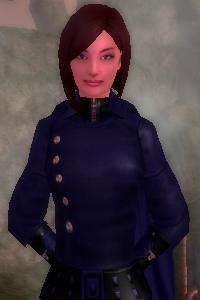 Akina's sense of self is multifaceted and difficult to pin down Outward projection consistently changing depending on what she judges as needed for the present situation, she possesses two stand-bys: An excessively glum, serious, order-barking demeanor wherein she displays little to no regard for any she's chosen to chastise at the moment, or a much more gentle, kind exterior. The latter is more often witnessed when she cavorts alongside her very closest friends, or occasionally is genuinely interested in meeting a new person (without wanting to initially drive them off).

In truth, Akina suffers from a spat of survivor's guilt; having ultimately proven the destruction of an entire planet, caused the near-total extinction of another Earth's population while genuinely attempting to aid them, and lost numerous significant others over her lifespan (such often treated by the dedicated partner with a degree of flippancy she simply can't understand), she's gradually gone downhill from a bubbly, lively personality to a bitter, cynical woman concentrated only on her own motives: Ensuring that what she's seen come to pass prior doesn't repeat itself. To these ends, she can and will do vile activities, having gone so far as to assist Captain Mako to integrate herself more formally with Arachnos and aided the Rogue Isles' leadership in attempts to repel Reichsman.

When in combat, one rarely hears much from Akina: She grows cold as the chill she emits, speaking only to instruct and demand of her assistants. Though her personal troop is all-too willing to carry out her oftentimes borderline-suicidal instructions, many have felt disconcerted by her presence; in the midst of a friendly association, Akina will inevitably be the odd one out, ignoring or deflecting most attempts at conversation. To her, the number one priority is whatever opponent has dared challenge her that day.

More privately, Miss Dose is known to friends and family members as a very serious and jaded woman, but one with a heart of gold beneath it all. Caring for her children, all of which have been acquired through means Akina scarcely intended (she has yet to carry actual offspring, and deems it too dangerous due to her diminutive size), would be a full-time endeavor for most, yet she contently splits her time between her duties as a morally ambiguous heroine and that of a loving mother.

For family and friends, they often find themselves beneath (depending on the day and her mood) cynical observation worthy of Molière, though it's to assist them in becoming better people, or oppressed beneath a nearly-four-foot-tall beacon of love, during which point she expresses how much she truly appreciates them. However, just as often, a pronounced lust for power and control which rests just underneath her friendly exterior can alienate them. Whether the declarations of love are desperate attempts to hold onto those few faithful who've remained by her side for many years remains to be seen, but one question stands above the rest:

Who gave her a therapeutic degree?

The TT has a vast variety of functions. Its primary usage and function is to allow Akina's band of friends to follow her around (and their chief members have the most efficient units of the bunch), enabling the six members of her core crew, ready for deployment when she is, to be by her side almost constantly when on the prowl (the only downtime on their recall units is their recuperation in between beatings; were it not for the hospitalization unit needing to regenerate whatever damage's been done for them, they could be instantly recalled). Their equipment can be transported the same way. Two core reprogrammed Clockwork units under her care, a Builder and Mender, have much less advanced teleportation units which enable their summoning only on a fifteen minute basis. Coupled with their energy shielding's drain on their power supply, they're incapable of staying active for long. Similarly, an entire legitimate gang formed by deceased member Wesley Ellis near the start of their romps fighting villainy together can be summoned by the mechanism, though the large amount of them simultaneously appearing strains the teleporter's mechanism and temporarily deactivates their call mechanisms after a successful summoning. The longest recharge of all, however, goes to the experimental mode she only developed a year or so back, wherein she designates a number of units (via communicator link) as friendly, then teleports them instantaneously to her location. Doing this risks overloading all the teleporter on every use, and hence tends to be very rare.

The Force Gauntlets built into Akina's current armor were nabbed from a standard Praetorian Police Department Trooper, making them one of the least efficient models. Nevertheless, Force Brawling, while dealing minimal damage (especially given her tiny amount of strength) has a small chance at knocking an opponent's sense of balance off should she land it correctly.

Force Gauntlet bolts are more of a deterrent than an active offensive agent, dealing a minimal amount of damage in an attempt to knock the target off their feet with a continuous onslaught of kinetic energy.