Agent Repulse takes his inspiration from a number of different sources. The most obvious source is the iconic "Man-In-Black". He also draws inspiration from old cowboy movies of the stock character "The Stranger With No Name". His background has comparisons with the Company from the television show "Heroes". 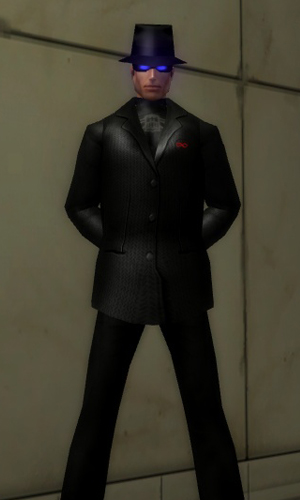 Agent Repulse tends to be a quiet man, preferring to let his actions speak louder than his words. When he does speak, he tends to be unfailingly polite, sometimes bordering on the overly formal. He keeps a pleasant attitude towards his friends, showing more warmth than he does to strangers.

He remains cool and calm under pressure. He has not been seen to ever lose his temper, regardless of provocation. When he acts, it is because he wishes to-not because he has been pushed into it.

Until he went rogue from the Agency, Agent Repulse tended to follow orders from his superiors without question. After abandoning it, he began to use his own initiative, with what he feels are surprisingly good results.

Agent Repulse's suit allows him to utilize force fields for a number of effects. At present, it can protect him with a personal force field to prevent harm, or a repulsor field to throw back attackers. The suit can allow him to protect others with deflection and insulation fields, providing a range of protection against a variety of assaults. He can also create a large scale dispersion bubble, increasing protection for those around him.

Agent Repulse has recently been able to utilize these fields in an offensive capacity, launching bubbles of force to knock over his opponents; he has done this with pinpoint accuracy, and he has unleashed a more general effect, bowling over multiple antagonists.

Agent Repulse's suit also has an offensive component. Tapping into an energy source of unknown origins, the Agent can fire bursts of energy at his opponents. This energy can be channeled as a burst of small bolts, or a focused beam of energy. The energy can be projected in a highly charged state at close range, or can be focused into a long range attack. 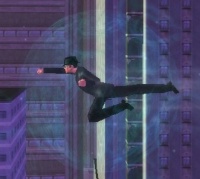 Agent Repulse's suit has additional functions besides the generation of force and energy.

Agent Repulse's suit can allow him to defy gravity, allowing him to hover in place as he fights his opponents, or fly at greater speeds for long distances. The upper limit of the suit's speed has not yet been measured.

The physical regimen encouraged by the Agency has helped Repulse keep himself in good physical condition. He is an excellent long-jumper, and his health is strong enough to throw off most illnesses.

Perhaps as a side effect of his defensive mindset, Agent Repulse can direct those working with him in positioning themselves for greater protection.

As Agent Repulse continued to tinker with his suit, he found that he was able to dramatically increase the raw power supplied for short periods of time. The suit also has been reinforced with armor plates over selected parts of his body, making him far more resistant to harm. The suit can also increase its efficiency, requiring less power to provide the same effects for a limited time; it requires significant time to recharge after such an expenditure.

Agent Repulse has some technical knowledge, able to maintain his suit and modify it to suit his current needs. He also has a fair investigative mind; while no great detective, he can often learn what he needs to know-and act upon it.

The Agent is a normal human being; as such, he is heir to all the frailties that humans are prone to if his defenses should fall.

Agent Repulse must constantly be on guard for other agents of his former Agency, who see him as a rogue who must be eliminated.

Agent Repulse's powers derive fully from his bodysuit, worn under his traditional uniform. His sunglasses, while they appear ordinary, are a sophisticated sensor suite, complete with a Heads-Up Display, and can tie into computer systems to update the Agent on threat levels.

The hat he just wears because he likes its style.

The Agency is a secret organization formed by the Executive Order of the President of the United States, as a part of a two-pronged strategy a year after the start of the Rikti War. The Agency was established not to monitor the comings and goings of alien life forms on Earth, but to keep tabs on those who acquired superhuman abilities. Paragon City and the Rogue Islands, being the centers of superhuman activity on the planet at the present time, are watched very carefully. It is thought that the Agency is continuing to put together a massive database of all known superhumans, their strengths, weaknesses, and even identities.

The Agency employs its agents as Men In Black, knowing that the outfit can be intimidating-as well as making it difficult to personally identify any of its agents. The best agents are equipped with uniforms that allow them access to considerable super powers themselves. One such agent was code named "Agent Repulse".

Agent Repulse was assigned to monitor the activities in Paragon City, and in Atlas Park in particular. Atlas Park has long been a gathering point for many superhumans in Paragon City, and it was thought that this would be the best place to gather information on newly emerging heroes-and possibly recruiting some into the Agency. But something unexpected happened as Agent Repulse observed these heroes.

He began to admire them.

Professional detachment is encouraged as an agent. Agent Repulse lost that detachment, and began to believe that the powers in his uniform could be better used to help the people of the city instead of simply defending himself against accidental discovery. Agent Repulse cut his ties to the Agency to go freelance.

For months, Agent Repulse did not act as a registered hero in the city, choosing to keep his identity secret. In April of 2009, he was finally willing to divulge information to the Freedom Phalanx personally, who agreed to keep the information confidential. As a result, Repulse was finally operating in the bounds of the law by the letter as well as the spirit.

Shortly afterward, he was hired on by the corporation Action Enterprises to operate as their chief of security; the company felt that they had been the victims of underhanded play by Crey Industries far too many times. Since then, with one exception-an all out assault on a corporate office by Arachnos-the security teams at Action has repelled every corporate espionage attempt, thanks to Repulse's expertise.

Unfortunately, while he was able to deal with many lesser dangers, Repulse was unable to protect the company from the meteor strike upon Galaxy City on September 13, 2011-in particular, against the meteor that smashed through the Action Enterprises offices, killing everyone within-presumably including Repulse.