This reimagining of Professor Dredd came about from throwing "Genius Scientist", "Greedy Technician", and "Cool Attitude" with a dash of "Entrepreneur" into a blender and pushing "Liquify". Dredd wants to be famous for his work, and rich by selling it to prospective clients-and this means going out and giving live demonstrations all over the world on just how good it is...and how cool it looks. 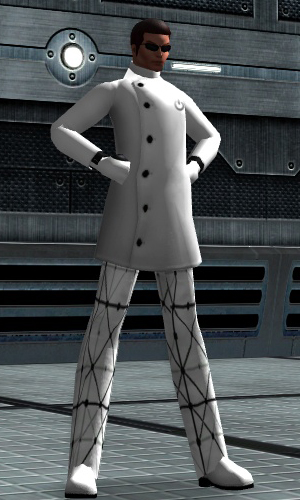 Dredd is one part technologist, one part salesman. As he is out to make money-in very large amounts-he has to at least be able to convince people that his tech is the best tech out there, and that it's worth every penny. Even so, he isn't so full of ego that he believes his tech is the best. If he encounters new technologies, he'll size them up and determine for himself whether it's trash or something worth incorporating into his next set of designs.

His morality is substantially fluid. While he wasn't thrilled about being dragged into the grand plans of his partner, he has come to agree that it's so much easier to make money on both sides of the morality fence. Wyvern will pay just as much as Longbow, which is equally matched by Arachnos's payscale. Dredd is similar to arms dealers all over the world in this respect-he doesn't really care who uses his tech, as long as he gets paid, and he gets credit for it. If he didn't supply the tech, someone else probably would; why shouldn't he be the one who profits, then?

Dredd isn't a fan of going out in the muck and grit of the battlefield, as a rule. While he can-and will-do so, he far prefers to spend his time in the workshop of the Black Syndicate, and let a remote unit act as his hands and voice in the field. He's not above working with heroes-or villains-in the beginnings of their careers, as he firmly believes that it pays to advertise; help early can reap great rewards later.

As one might imagine, every single "power" utilized by Professor Dredd is keyed in advanced technology.

Dredd's signature tools are his combat robots. His simplest-but still deadly-combat drones are his Stormfront drones, armed with exotic energy weaponry and able to exert considerable feats of strength. More complicated is the Bastion robots, designed to work in tandem with the Stormfront series; they possess remote repair capability and deflection shield technology, in addition to sporting a series of particle weapons, grenades, and seeker drones. The most complex piece of equipment is the Olympus assault robot, a hulking hunk of metal with plasma weapons, assault rockets, and flamethrowers-and is strong enough to rend apart other robots without effort.

Dredd's work on these robots allowed him to also develop a pulse rifle for personal use, and a fleet of nanomachines dedicated to full mechanical repair.

Another hallmark of Dredd's work is the design of the Hardshell Force Gauntlets. The Hardshell allows Dredd to protect himself and people around him with energy screens. These screens are suitable against a wide range of physical and more exotic attacks. Minor adjustments allow him to use the force projections for an offense, bowling over or knocking down his enemies-either singly or in groups.

Thanks to his time out in the field with his robots, Dredd's developed a rudimentary set of tactics and strategies which work astonishingly well with people as well as with his combat robots. This is also in part aided by a microcomputer battle analyzer that records what his eyes see (through his glasses) and informs him of appropriate tactics through an earpiece.

Feeling a lack of desire to walk to where he needs to go, Dredd developed the Windwalker Null Gravity Inducer, giving him the capability to fly. It is said that he is working on expanding the Windwalker to allow those nearby to fly as well-primarily in consideration with his robotic guardians.

Dredd is simply a technological genius, no two ways about it. While his area of expertise is obviously robotics, he has created the equipment that gives him all of his special powers, and is largely responsible for constructing a specialized facility for the Black Syndicate to serve as an operational platform and to continue his work in designing new technology.

Dredd's ability to create is limited to machinery. While he hates to admit to it, other fields of science are beyond his grasp. If it can be built, he can build it; but understanding the theory behind the creations is something that he cannot do.

Dredd is likely to have many assorted gadgets upon him at almost any time. He claims to have invented the smartphone a decade before Apple did, and it is true that he's been able to use his for feats that such phones are simply not designed for (see above). Of course, Dredd is known to exaggerate his achievements. Despite that, Dredd will occasionally reveal devices that have limited use-such as a device that reconstructs a Snow Beast from the Winter Horde, or a Quantum Array Rifle scavenged from a Void Hunter. 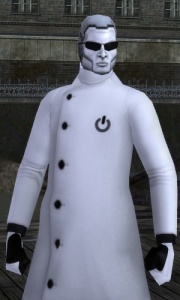 Dredd Remote Unit
In recent days, feeling that it's silly to risk life and limb on activity involving superhuman powers that can turn him into chunky salsa, Dredd has designed a remote unit to act as his "avatar" in situations where he feels at risk. The unit gives him realtime information and has a sophisticated AI to allow it to act as he would act-if he had no self preservation instincts. However, he has also made sure to program in unspecified safeguards to make sure that it "doesn't go Skynet on me".

Once upon a time, there was a villain named Professor Dredd, a member of a Black Syndicate from Protectorate Earth. He came to Primal Earth because he had gotten in over his head back home; specifically, too many people were looking to separate it from his neck. Professor Dredd assisted an old ally of his, Ebon Thunderbolt; but eventually, in spite of some successes, he was caught, imprisoned, and extradited back to Protectorate Earth along with Ebon. And that seemed to be the end of the story.

The thing is: he had developed a reputation as a genius. A mad scientist, sure, but a genius one. And Ebon, his ally, had also managed to develop a reputation as a dangerous man. And when the people who held those reputations were taken away from Primal Earth, an opportunistic man decided that it was worth the risk to claim the reputation for his own.

But first, he would need help.

Reg Andrews was a technologist at Crey Industries who had struck out on his own after being caught hacking their payroll computers. Crey didn't believe in simply firing people; it believed in opening fire on those who got on their bad sides. Only the intervention of an old friend had kept Crey from punching Reg's ticket permanently. Grateful, Reg would develop some gadgets for his friend, and moved with him to the Rogue Islands, where Crey's influence was not quite so great.

He had a fair business repurposing recovered tech when his friend came to him with an audacious idea: he was going to claim the name of Ebon Thunderbolt for his own. But he needed a partner, a Professor Dredd to his Ebon-and he wanted Reg to take that name. Reg considered it, and figured that Ebon was probably going to refer to him as "Dredd" regardless of what he decided. So, he joined Ebon in forming a new "Black Syndicate". Ebon would be the money-maker using his fighting skills, and Dredd would be the money-maker using his advanced technological knowledge.

Ever since, the two have made a name for themselves as mercenaries willing to work for considerable pay-and Dredd is now richer than he had ever dreamed he would be, not only from sales of his technology but his share from Syndicate activity-and more and more, in playing the stock market. When you eliminate good and evil from your personal lexicon, the gray in between can offer a life of wealth-if you are willing to take that chance.