If I say, Surely the darkness shall cover me;
even the night shall be light about me.
Yea, the darkness hideth not from thee;
but the night shineth as the day:
the darkness and the light are both alike to thee.
—The Pslams 139, verses 11-12, The Holy Bible: King James Version (2000)

Nyctomancer is in part my tribute to the great mentor/student relations seen in fiction. Stephen Strange to the Ancient One; Anakin Skywalker to Obi-Wan Kenobi; Haplo the Patryn to Lord Xar of the Nexus. With the coming of Darkness Control in I-22, the time seemed right to develop this character. 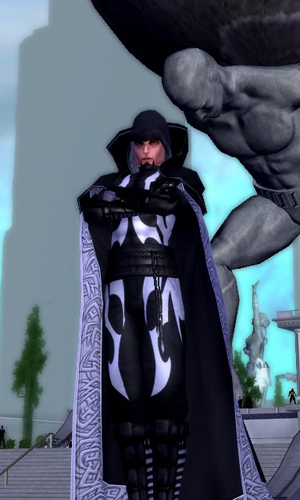 Nyctomancer tends to err towards the serious. Though he shows no problem with socialization, there is a certain level of detachment that prevents him from letting go completely. Ten years of relative seclusion learning magic have left their mark upon him.

Nyctomancer tends to treat other practitioners of the arts of magic with respect; he doesn't view his magic as superior to any other's, nor does he view himself as superior-in fact, he knows that his power does not yet match his knowledge. He is interested in how other magicians practice their arts, as a point of comparison. He does take offense to the suggestion that his magic is black magic, though. If day and night are not evil, he says, how then can magic over darkness be any more evil than magic over light?

One of the side effects of his time learning magic has been near isolation from advances made in technology in the last decade. He just missed the Rikti War, and thus missed how the results allowed technological advances beyond reason; cell phones were still somewhat bulky, laptops not as light, nor as powerful as desktop computers. Now he is in a world of iPads and Smartphones, hybrid automobiles, and more. And that's before adding the supertechnology heavily present in Paragon City. It is likely that as time passes as a part of the world, this will disorient him less and less.

Nyctomancer's powers derive from his sorcery. Most of his magic tends to be ritualistic and time consuming, such as mass scale teleportation over long distance and divinations. However, he has begun to improve his "on the fly" spellcasting, allowing him to perform a variety of effects.

Nyctomancer's primary use of his magic is to use the shadows to bind and restrict his opponents. The shadows numb strength from his enemies, making it harder for them to land a blow on Nyctomancer; given that Nyctomancer has no special protections, he considers this of paramount importance.

On the other hand, sometimes he just needs to hit someone. Preferring to stay at a range, he can loose bolts of hardened shadows at his opponents to both cause them harm and to sap the sensation from their limbs.

Nyctomancer's magic, while primarily centered on darkness and shadow, can tap into other elements.

Nyctomancer's preferred mode of transportation is teleportation. He can transport himself short distances and tranport others over longer distance. In the near future, he expects to be able to increase his range from yards to miles.

In his "past life", Richard Courtenay was an up and coming day trader, and had amassed a very comfortable amount of wealth-this in spite of a jittery market over the last decade. While he is out of practice, he could likely make a decent living doing that again.

However, his efforts have now been channeled into the study of magic. He has a small collection of tomes, mostly concerning the dangers of dark gods, demons that utilize shadow as a part of their portfolio, and similar. More importantly, he still has access to his Master, whose knowledge exceeds his own by a very considerable margin.

For the most part, Nyctomancer is limited by his use of spells to create his effects. If he is unable to speak, or bound in some way, he cannot cast his spells.

Nyctomancer has a fully functioning Blackwand; while the original crafted by the archmage Tarixus was created by foul magic, Nyctomancer created his own as a final test of his ability before returning from isolation. And he didn't need to resort to black magic to do it, either.

Richard Courtenay seemed to lead an average life growing up. Made friends, dated a high-school sweetheart, went to college, got his degree, became a day trader on the stock exchange in New York. At the same time, however, he seemed to be looking for something more out of his life.

Thanks to the internet and the existence of places like Paragon City, he was well aware that magic existed. But it was something he figured happened to other people-not to people like him. He was just a man who had put aside a dream of pursuing magic for a more realistic goal of making money, and living in a somewhat well-to-do manner. That lasted until he was 24.

One dark night, he met a man-a old man who had to be in his mid-eighties, yet was still surprisingly spry. The old man told him that he had been searching for Richard for a long time-that Richard had a potential within him that he had not yet realized. A potential for magic. Richard was dubious-until he saw what the old man did with darkness around him. The old man confided that he feared that something terrible was on the horizon-and he feared dying before passing along his knowledge. He warned Richard that if he accepted, it would take a long time. He would have to leave his old life behind him-probably forever. In return, the old man offered a life of hardship; a lifetime spent watching every shadow for danger, a life where he could only appreciate the light by the shadow that was cast. And magic.

Richard left his old life behind, leaving only a note to his family indicating that he was going away. He went with the old man to a sanctum near London, England, and spent the next ten years learning the secrets of magic and shadow. His Master grew older, but no less weak in body or mind. The Rikti War passed them by; a brief incursion of the Rularuu was ignored. The resurgence of the Rikti assaults, zombie apocalpyses, and invasions by parallel Earths were seen as minor; the Master said that what was coming would be worse than all of these.

Almost ten years to the day, the Master told the Student that there was nothing left to teach. Richard would continue to learn-his life from that day forward would be nothing but a continuing education-but the Student was now ready to stand on his own. "Be vigilant", the Master told Richard. "An ancient enemy is on the move, and my attempts to see what lies ahead indicate that he will help awaken something monstrous."

Richard returned to the world; he quietly made preparations for a new home, a place to work his magic and to continue his own studies. He was all set to move when he sensed a terrible force pushing itself into reality.

Richard cast aside his plans, and headed to a new destination: Paragon City, Rhode Island. He was not ready to face such power, he knew that. But he could at least locate the ancient enemy his Master alluded to-the one who had bedeviled those who had held the title of Nyctomancer before him: Praetor Magisterix Cravenus. Fortunately, it was not hard to find on the Internet that there had been a group of heroes who had thrwarted the Baron's plans in the past-and swiftly acted to join them.