The Amazing Kane takes his lead from the era of pulp heroes. Kane is an apparently normal man, with a potentially great power over the mind-which seems to transcend details like species, or even the border between life and death! 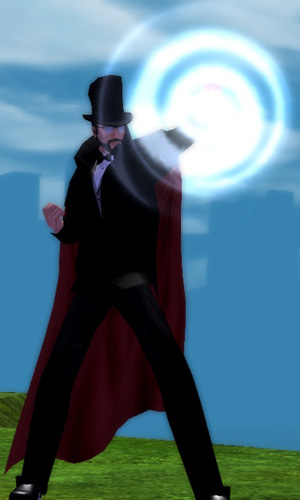 Kane's upbringing shows through in nearly every act he takes. When he speaks, he will often tend towards the verbose. He is unfailingly polite to his friends, and to those he has only just met. Enemies are treated with an almost cheerful contempt-can't these people work with society? Wouldn't their goals and dreams be better met through working within the law?

Kane maintains a "proper" and genteel attitude, and prefers to believe in the best of people unless proven otherwise-and even those proofs only affect his opinion towards the specific individual. Kane believes that mankind, as a general rule, is okay; that people can continue to improve their own lot by their own efforts, with a little help from their friends.

As a performer, Kane tends towards the flamboyant, complete with flourishes and snappy patter. He derives great joy from the amazement of others, and little gratifies him more than the expressions of children watching his performances; he is as at home performing in front of the crowds in an arena as he is in a small orphanage in a private show.

The Amazing Kane's powers are derived from magic; while he is no wizard or sorcerer to utilize spells for these effects, magic is in his bloodline, and the magic has manifested itself in the form of the following powers.

The Amazing Kane's powers primarily center on mesmerism, expanded to the ultimate degree. While he originally needed to focus this power through his voice, he eventually was able to transcend that limitation, utlizing this ability through his will alone.

This power is magically based, and normal psionic defenses are less effective against it as a result. Magical defenses have their full effect.

Formerly, Kane had been able to force an opponent to a state similar to slumber, as well as paralyze their bodies by cutting off the mind's access to them. After considerable practice, Kane's ability had expanded to affect several people at once, as well as single targets at a time. He could befuddle the mind, confusing an opponent, causing them to see friends as enemies, and enemies as friends. A side effect of that talent allowed him to utilize what more modern heroes refer to as the "Jedi Mind Trick", a phrase which annoys Kane to no end. He could also unlock the hidden terrors that lurk within the minds of his enemies, crippling them temporarily with mind-numbing fear.

Due to his encounter with the Menders, much of this power has been stripped away. It remains to be seen if he can recover enough to restore his abilities to their previous mastery.

Note that Kane's power is not telepathy; he cannot sense the presence of other minds, nor can he read minds, although he can "suggest" a subject tell him what he wants to know.

Thanks to his heavy involvement with time travel and his own studies, as well as his violent altercation with the Menders, Kane has been immersed in temporal energies. He is beginning now to take advantage of this by manipulating the time flow to his advantage.

Formerly, Kane was able to use his mental abilities to convince a person that they were stronger, more resilient, healthier-even convinced them they were less wounded-and in doing so, actually caused them to heal themselves. Unfortunately, this power seems to have been permanently lost thanks to the conflict with the Menders.

In addition to the above powers, Kane's magic seems to have allowed him other unusual abilities.

Kane has developed the ability to transport objects from great distances. Size seems to be a limiting factor; a single person he could summon to him from perhaps two miles away. Smaller objects can be summoned from close to fifty miles; in addition, such smaller objects could be sent back as well (he has been unable to do this with people-sized objects). He can also transport himself through the same method, either by "hops" about one hundred yards at a time, or to a longer range; he has been observed teleporting from Atlas Park to Talos Island.

Before his incident with Ouroboros, he had expanded his skill to bring unwilling subjects to his location, although not from nearly the same distance as willing ones; he theorized that their uncooperative minds are the reason behind it. After the incident, he had lost the ability to teleport entirely, but much of that power has since returned.

This transporational ability is a magical effect.

Kane is an accomplished stage-magician. He is skilled in most aspects of the tradecraft, such as sleight of hand, illusion, escape artistry, apparent teleportation (honed well before he gained the actual ability to do such), and other similar magic tricks. He is also a skilled performer.

Kane is, in spite of his abilities, just a man; thus, he is capable of being harmed like any other.

Kane needs to be able to concentrate to use his abilities. Even though he does not require much time to concentrate (often no more than a second), he can be interrupted.

Kane is nearsighted, and thus requires corrective lenses to see things from a distance.

Kane has available a magic wand; which is to say, a stage magician's wand, black with white tips. He will occasionally use this as a prop; it has no special abilities or magic, but serves as a marvelous distraction from what he is really doing at times. It is possible that it is a focus for an apprentice charm.

In mid 2009, Kane acquired a Blackwand, which he has used regularly ever since.

Kane is always impeccably dressed in a tuxedo and top hat, as befitting a proper magician.

The Black Sheep of the Grimwoods

The Grimwood family in England has always had a strong connection to the world's magic. Even so, only a comparative few would actually practice such arcane skills, for fear of being branded witches or warlocks. One member of the family, Willard Grimwood, had no such fear. He grew in power steadily, but as his power grew, his lust for it grew as well. Sometime in the mid to late 1700s (the family histories are vague), Willard apparently began to barter with dark forces, culminating in an attempt to sacrifice his wife, Amelia, to the Devil for greater power. How he was ultimately stopped is something the histories do not discuss, although some evidence points to a group of Adventurists being responsible in one of their early exploits.

Amelia watched as Willard was burned at the stake for witchcraft. Unable to bear the memories, she left England for the Thirteen Colonies-just in time for the Revolt. Not long after, she bore Willard's only son, whom she named Robert. She would have no other children.

The years would pass, and the blood of Willard Grimwood seemed still have more than its share of magic. Each Grimwood would marry, and have but a single male child-continuing the line, but no more than that. By the 1940s, the Second World War had broken out. During this period, a man who referred to himself only as "Mister Grimwood" would come to prominence as a member of the Adventurists, along with other unusual heroes of the day. The family histories mention his magic, but do not go into detail as to how he wielded it.

Eventually, Mister Grimwood would vanish from the scene as well, but not before siring another child to continue the Grimwood line.

Kane Grimwood was born in 1980, and from an early age, he was fascinated with magic; stage magic, to be more precise. Throughout his youth, he studied books about magic tricks, and learned the basics of the craft. As he graduated college, he worked as an assistant to a number of magicians, learning what he could after taking the Magician's Oath to never reveal his secrets to any other than another prospective magician. By the time he was old enough to drink, he was becoming one of the most talented stage magicians in America. By the time he reached his twenty-eighth birthday, he was spoken of in the trade in the same breath as David Copperfield, Penn and Teller, and David Blaine.

Also on his twenty eighth birthday, his own magic began to manifest. Kane discovered that his skill at mesmerism had gone beyond simple hypnosis tricks, to something truly superhuman.

It would have been easy for someone with his power to use it wrongly; to use it to gain fame, women, and riches. But Kane had been raised better than that: he wanted nothing that he had not earned. And using magical compulsion was hardly sporting. Instead, he resolved to use his newfound abilities for the betterment of mankind. And when it came to superhuman power, there was only one place to go.

In May of 2008, the Amazing Kane arrived in the city. Shortly afterward, he would register as a hero of the city. When he learned of a group of heroes claiming the name of the Adventurists, he felt compelled to offer his services to them-unknowingly continuing his family's legacy. As time passed, though, Kane felt himself drifting further away from the group, usually operating on his own. This left him easy prey for his returned ancestor, the Devil's Chamberlain, to capture him late October 2009 to use as the crowning sacrifice for a plot for his master. Fortunately, the intervention of Hyperion Force got him out of trouble, and he assisted that team in (presumably) ending the threat of the Chamberlain once and for all.

Since that time, Kane had gone into semi-retirement as a stage magician and put all of his energies into exploring Time via Ouroboros technologies. Despite these studies, he would appear at key points to intervene with heroes to assist in various matters. He became aware of an aspect of the Pillar of Ice and Flame in the hands of the Midnight Squad, and he took pains to study it as well.

At some point in the future, he became aware of the destruction of Galaxy City in 2011, and was determined to warn Paragon City of the Coming Storm's arrival. This led to a confrontation with the Menders of Ouroboros, who had seen further into the future, and determined that Galaxy City had to die to prevent billions more from dying at a later point in time. Kane disagreed with that, and pit his powers against the Menders, refusing to be stopped.

The Menders had a few million years worth of technology, magic, and more important, knowledge to fall back upon. Every gambit was countered, and while Kane gave a good accounting, he was ultimately stripped of much of his power-and wound up in Galaxy City roughly thirty seconds before the first meteors hit. His current whereabouts remains unknown.