Davros: You betrayed the Daleks?
Dalek Caan: I saw the Daleks. What we have done throughout time and space. I saw the truth of us, creator, and I decreed: No more!
—Russell T Davies, Doctor Who, Journey's End (July 5, 2008)

When the Staff Fighting powerset was released, I already had an idea and a concept waiting. Thornwielder was introduced in short fiction that I'd written up for someone's open-RP on the Union Supreme forums, although not in his "final" form. The idea of someone who turned his back on the villainous Circle of Thorns by taking a powerful weapon away from them appealed to me. When the game closed down, obviously the idea got shelved. With the revival, though, it was time to give the character his time in the spotlight. 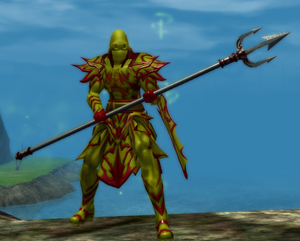 Thornwielder is a quietly attentive young man, one who feels that he has much to learn about the society he'd been taught to despise. He understand that it was all lies spread by the Circle of Thorns, but sometimes, he has an instinctive urge to sneer at various aspects of surface life. Fortunately, the mask over his face helps conceal this reaction, so he doesn't inadvertently offend potential allies.

While learning minor magic rituals, Thornwielder is no mage. Instead, he derives his power from his magic trident and a force of will that has only grown stronger after he broke from the Circle.

Thornwielder's power comes from his trident. He's no slouch with staff fighting on his own, but the spirits bound in each of the Thorn Blade tines, each a master of the Body, the Soul, or the Mind, enables Thornwielder to tap into their skills and become a true weapon's master.

Thornwielder's will has been refined by his training as a member of the Circle of Thorns; while his skill at magic isn't much to write home about, it enables him to focus through pain, through trauma, and ignore his wounds as he fights his way to victory.

Thornwielder, while no wizard, still knows some magics that have enabled him to add to his utility.

Thornwielder has spent his youth learning of occult knowledge as taught by the Circle of Thorns. Accordingly, he could be considered an excellent source on that organization.

Thornwielder derives his name from his signature weapon, a trident whose tines are actually the signature weapons of the Circle: Thorn Blades. As such, they have the spirits of highly skilled warriors trapped within it, and that is one of the reasons why Thornwielder has made such an impact so early in a career.

Darelon was born in Oranbega, the home of the Circle of Thorns deep within the Earth. As he grew, he became apprenticed to the wizard Kotellis, a cultist whose ambition outstripped his ability by leaps and bounds. As such, Darelon got to deal with the joys of carrying buckets, mopping floors, cooking food, and generally engaging in any manual labor Kotellis required. In return, in theory, he was to learn magic.

It sounded nice in theory, anyway.

Darelon paid attention to the world around him, though, and eventually came to the conclusion that his future likely involved possession by one of the Circle's spirits and having his free will destroyed. That on top of the daily abuses convinced him that his best move was to abandon the Circle and retreat to the surface. He took a chance on stealing a weapon the Circle had been creating-a trident with a trio of Thorn Blades as tines-and made his way to the one city that the Oranbegans feared: Paragon City.

Darelon registered as a Hero of the City, under the alias "Darren Lonn", and now opposes the Circle as often as he can.