A good soldier obeys without question. A good officer commands without doubt.
—Imperium Thought for the Day, Warhammer 40,000: Dawn of War (2004)

Operative Rostov was originally just a bit part in the story The Arbiter Initiative I: Smoke and Mirrors; when the announcement came down that the Villain Epic Archetypes were going to be Soldiers of Arachnos, I decided to revisit the character in-game. The revised character leans heavily on a "disgruntled soldier" concept, with a bit of old-school science fiction flavor thrown in. If one were to think of him in a manner of "Nick Fury gone bad", it wouldn't be far off the mark. 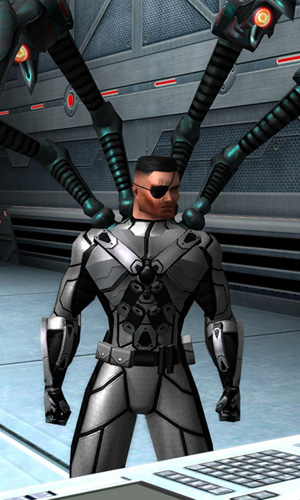 Rostov is a good soldier. He follows orders, and can give them when needed. He knows his place in the chain of command, and hopes to improve it. He isn't too interested in morality these days; that had been ground out of him by his training in the Ground Forces of Russia, and in the Wolf Spider program of Arachnos.

Rostov does possess a special dislike for the Arbiters, and while he will never outright defy them, he will certainly work covertly to undermine them at any opportunity.

Operative Rostov's powers derive directly from his training as a Soldier of Arachnos, and the equipment he has been issued by that organization.

The weapon system that gives the Crab Spiders their name is the primary tool of Operative Rostov. The arms of the Crab Spider backpack have an assortment of weaponry, from high-caliber, high-velocity kinetic ammunition, to toxic grenades, to high-energy plama launchers.

Rostov wears a custom suit of Crab Spider combat armor, which affords him significant protection from physical harm. This armor is rated to handle attacks from super strength impacts to directed high-energy attack. Rostov's training has made him a canny opponent, as a crack shot with an assault rifle and as a tactician who minimizes the vulnerability of himself and those who work with him.

Arachnos has supplied Rostov with some other custom equipment, not generally seen by the rank-and-file soldiers.

Anti-gravity generators within Rostov's armor allow him to defy gravity. He has been quick to exploit both the maneuverability flight gives him and the pepetual high ground in any conflict.

Rostov's training, in addition to the Revitalizing Ray treatments, has succeeded in keeping the soldier in exceptional physical condition. This improved markedly when he began investigating rumors of a "Well of Furies", which supposedly is the source of Lord Recluse's power. While Rostov has not reaped the benefits of unlimited power, it has improved his condition to the point where he may not even need the Revitalizing Ray anymore.

As Rostov rose to the status of Arbiter, he accordingly received more resources to call upon for his own use. The first was enhanced weapon systems, such as Hellfire Projectors installed into his armor. The second-and possibly more important-was access to the higher-end Arachnos robotics such as their Toxic Tarantulas and skilled personnel like Fortunatas.

Rostov had been an infantry soldier in the Russian Ground Forces; as such a soldier, he is well versed in most military personal hardware (grenades, bombs, firearms, etc). Since joining Arachnos, he has expanded this knowledge to that organization's weapons as well.

Outside of his armor, Rostov is as vulnerable to harm as any other human being.

On a monthly basis, Rostov must endure a revitalizing ray treatment, which locks rejuvenates his cellular structure. Without this constant treatment, he would rapidly age to his true age in a very short period of time.

Rostov is missing an eye, due to a close encounter with a Mamba Blade shortly after being reassigned to Mercy Island.

In a secret location, Rostov has concealed the only known prototype of a revitalizing ray which is capable of retarding the aging process; this ray will only work on individuals with certain genetic markers-others who attempt to use it give themselves multiple aggressive strains of cancer.

Kontantin Rostov was a soldier in the Russian Ground Forces, and served with little distinction. Rostov served a stint in Afghanistan, after which he officially "retired" from service. Rostov would not reveal why he would leave at the age of 38. The military didn't see anything wrong with it at the time.

Their opinions likely changed when he defected from Moscow to the Rogue Islands-with a set of schematics he had found and kept to himself; the schematics were for a "Revitalizing Ray", which could stop the aging process near indefinitely. Those schematics bought him into the Arachnos organization, and their scientists were able to build the ray; under the terms of the deal, Rostov was the first to benefit from its treatments. (It is also probable that the scientists were more than happy to let someone else suffer any unexpected consequences)

Rostov was lucky-it turned out that his genetic map was compatible with the ray. Those who were incompatible died messy deaths. Still, even a few would prove to be helpful to Arachnos.

For many years, Operative Rostov-assigned to the Wolf Spider program-commanded a small base on Sharkhead Island. He was disgusted as the Arbiters rose in power, as untouchable; if Arachnos was about survival of the fittest, why shouldn't the Arbiters continue to prove their worth? But arguing with Lord Recluse is seen-rightly so-as a very easy way to shorten your career. And your life.

Early in 2008, Arbiter Sands asked Rostov to orchestrate a scenario where Arachnos would appear to be arming a faction in the Council at Paragon City. While this work was successful for a time, it was never meant to truly succeed. Eventually, the scheme was uncovered by the Old Ranger, who learned that it was only ever meant to serve as a distraction.

Arbiter Sands was furious upon learning of Rostov's failure, and he was busted down the ranks back to Mercy Island. It would be there that Rostov would have the opportunity to rebuild his career, and become far deadlier than he had ever been in the past. In spite of the Arbiter's expectations, Rostov proved himself equal to all of the potential "Destined Ones", and was able to finally transfer out of the Wolf Spider program and into the Crab Spider program.

By late 2008, Rostov had set up a Black Ops organization for Arachnos on the behalf of the Arbiters, designed to give Arachnos strike capability with plausible deniability. The Arbiters remained no friends of Rostov, however, severely underfunding the organization's operations center. The organization-and Rostov personally-took a hit in prestige when a covert action by heroes of Paragon City in combination with treachery by one of his lieutenants caused a spectacular failure in an operation entrusted to him by Recluse's inner circle.

It was not long after that Rostov learned of Hyperion Force, and chose to avenge this humiliation upon its leadership, hiring the assassin Ebon Thunderbolt. Rostov swore off the use of primarily superhuman operatives for the Brigade, and began training up rank-and-file troops to utilize newer-and less obviously Arachnos-equipment to pursue the agenda of the Brigade. The new Brigade was in operation in 2009; at the same time, Rostov found himself in possession of an alien weapon, a Nictus tainted Stellar Gem; he would eventually discover its significance when several others ended up in Council hands. In 2010, he had one of his Black Ops troopers bond to the Gem.

Rostov worked quietly behind the scenes for the most part in 2010; his Brigade assisted in a set of negotiations between the Family and Arachnos, which ended up with the Family acquiring from Arachnos the designs for the Mechadoom series robots; they would also be on the scene of a number of unnatural earthquakes in Paragon City in an attempt to gain control of whatever was causing them (this would be a failure for the Brigade). By the end of the year, Rostov had grown in personal power to the point where Lord Recluse put him and his Brigade in command of a Volans-class airborne carrier, the Sky Spider. While its shakedown cruise encountered a couple of unexpected difficulties, there were enough successes to justify the long-term occupation of the carrier by the Brigade-and under Rostov's control.

Shortly afterward, Rostov got word of a "Well of Furies" and was informed by time travelers that he would be an Incarnate powered by the Well. Dubious, he investigated the situation to learn that there was some basis in fact. The power he gained from his exposure to the Well's power caught Lord Recluse's personal attention when he and a grouping of "Destined Ones" had an encounter with another Incarnate, the Reichsman; for his service in that matter, Rostov was named an Arbiter by Lord Recluse. It is suspected that Recluse was highly amused to bestow that title upon one of the most outspoken critics of the Arbiters. Despite this, Rostov continues to use his "Operative" title instead, and only breaks out his Arbiter status as a last resort.

In addition to his debut appearance, he also had a cameo role later in Defiant, the last story in the Arbiter Initiative cycle. Rostov would show up again in Turning Points, primed to be a major player.