General Retaliation is at best a "gray" character. He is loyal to the ideals of the United States of America, but has decided that since the country will not act quickly enough to stop a danger before it gets out of hand, someone has to-and he's volunteered for the job. In other words, he's gone behind enemy lines to deal with the danger, and has ignored the old saying "He who fights with monsters should look to it that he himself does not become a monster". 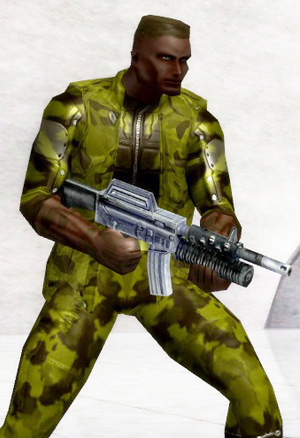 Donnell in the field is very much a no-nonsense soldier. He commands his troops with ruthless efficiency, and does not tolerate back-talk or questioning of his orders. He leads from the front, and provides an example to those who follow him.

Off the field, Donnell remains a wary man. Time in the Rogue Islands has hardened him faster than he would have imagined possible. He recognizes that making Arachnos his number-one target could eventually put him on their own top-ten list. As a result, he does not have a set base of operations, does not have a fallback position or place to retreat to. For him, it's all or nothing-he either succeeds or he dies. It is a testament to his ability that so far, he remains standing in the face of opposition far stronger than he is.

General Retaliation has no special powers. He relies on his equipment, and on his command of (reasonably) loyal mercenaries to get the job done.

General Retaliation has at his disposal a very large number of mercenaries. These mercenaries were originally culled from the refuse of Mercy Island; Hellions and Skulls and others who were considered as nothing more than target practice for the "Destined Ones". With time and his training, the mercenaries have formed a reasonably good fighting force.

While most of his available mercenaries are simple soldiers who fight at his command, a smaller percentage are special-ops trained, with some of the knowledge and training that the General had obtained in his time in the US Rangers.

In his time on the Isles, General Retaliation has managed to scavenge a substantial amount of Arachnos suprlus equipment-often during depot raids. He is known at this time to have acquired a large supply of their web grenades, several large boxes of caltrops, and a "healing beacon" which he primarily uses for the benefit of his soldiers.

General Retaliation has other talents that are less notable, but no less important to his continued survival on the Rogue Islands.

General Retaliation is well versed in the strategies of assault, capable of directing those who follow him for deadly effect.

General Retaliation is a proficient marksman with both standard weaponry and with "acquired" Arachnos weaponry. As a former Army General, he has significant operational knowledge of how the United States military functions, and is extremely knowledgeable on military history.

General Retaliation is a normal man, with no inherent immunities to harm.

The General uses a specialty Arachnos SP-64 Assault Rifle, a weapon manufactured by Arachnos for Arachnos. The General didn't much care what Arachnos might think about his appropriation the weapon.

The General's helmet gives him sat-com access to his organization, his troops, and the general communications network in the Rogue Islands. His uniform is padded with flexmetal plates, keeping him alive in dangerous circumstances.

David Donnell was a crack member of the 75th Ranger Regiment, a soldier of the United States Army with decorations by the score. He served in many military conflicts, and all over the world. Eventually, he rose to command the entire Regiment, and proved that he was as good at the administrative tasks as he was on the field.

But the Rikti Invasion proved that there were some forces that were far greater than the military's. At the Battle of Fort Benning, the Rangers of the 75th were nearly wiped out to a man, having taken the brunt of the Rikti attack. Donnell was one of the survivors-and he personally saw to the well being of all of the survivors, including Master Sergeant Thomas Riley.

At the conclusion of the War, Donnell was promoted to Brigadier General, and served as the adjunct to Major General Brian Hunter. The two shared a common belief that the next war would be fought not simply with soldiers, but with superhumans. To this end, they used a report provided by Marine Lieutenant Michael Cooke to bolster their argument that a new military branch was warranted. This led to the formation of the United States Special Powers Directorate.

The US-SPD had its share of problems, and as the organization struggled, Donnell noted with growing concern the increasing power of the Rogue Islands-and Arachnos. Donnell pushed hard to get the United States to recognize the danger-especially once Arachnos put troops on the ground in U.S. soil in Paragon City. But neither the Executive nor Legislative branches seemed inclined to act on this-choosing to bolster the armed forces' might on the Rikti danger.

Donnell decided that this was intolerable. He contacted some old Rangers who shared his concerns, and finally deserted-dropping out of sight.

When he was next seen, he was operating in the Rogue Islands as "General Retaliation", operating a merc outfit called "Fate Incorporated". He drew heavily from the criminals on Mercy Island to fill out his rank and file-criminals all too happy to have a decent shot at surviving being hunted by the "Destined Ones".

Donnell's standing orders are to refer contracts to him; as most contracts involve taking down villains in the Isles, he is willing to take contracts even from other villains. He has realized that he will eventually be brought back to the States on charges, and has accepted that he's burned his bridges. But ultimately, Donnell plans to bring down Arachnos itself; the next step after is one that continues to haunt Donnell's nights, as he worries about the anarchy that will follow.

Donnell was originally a bit part in the origin of the Old Ranger; with further writings, the character began to develop into his own. Recent Ranger stories have included him as a main antagonist.