Justice urged on my high artificer;
My maker was divine authority,
The highest wisdom, and the primal love.


Before me nothing but eternal things were made,
And I endure eternally.
Abandon every hope, ye who enter here.
—Dante Alighieri, The Divine Comedy: Inferno, Canto III Lines 1-9 (c. 1308–21)

Of all the characters I've put together-specifically, of all the villains I've got backgrounds for-the only one who can truly be considered unflinchingly "Evil" is the Devil's Chamberlain. The Chamberlain isn't based on any specific character, but instead on the idea of someone who has bartered his own soul for power-and still craves more. 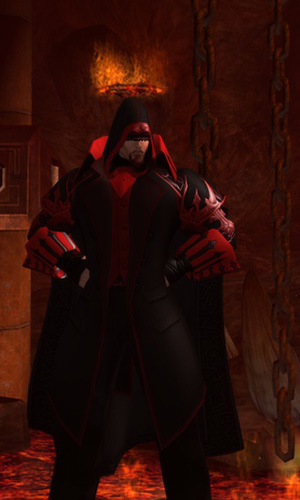 The Chamberlain's desires have always been for more power. His initial cravings for knowledge were the key to power-and the key that allowed, if his journals can be believed, the Devil to corrupt him and his magic. At the same time, the Chamberlain chafes at being a slave to anyone or anything.

There is no depravity that disgusts him; no atrocity he is incapable of performing, if it will get him closer to his goals. He was perfectly content with sacrificing his wife and unborn child for greater power-if he was willing to do this, then doing worse to other people born a couple of hundred years later isn't likely to cause him to lose sleep.

The Chamberlain is perfectly willing to barter with others for his aid-even heroes. The means are just means to an end-the particular type of means matters little to him. He'll engage in trades from simple things like service, to far more exotic fare such as souls bound to him. The fate of said souls is best left to the imagination.

The Chamberlain's powers derive from magical spells. He was-arguably-one of the most powerful enchanters in the 18th century. While he has not reached those heights in the 21st, he is still demonstrating a significant amount of personal power.

Magic spells that affect the mind are the strongest tools in the Chamberlain's arsenal. Magic spells laid upon him over time allow him to use these effects without use of rituals. With his control, he can force his enemies to sleep, or paralyze them, or simply override their wills with his own. He can unlock the hidden terrors of the mind and unleash them upon the unwitting.

His own mind has become so strong as to affect the physical world around him. He uses what is commonly known as telekinesis to throw his enemies around, singly or in groups.

While control over the mind is the Chamberlain's preferred methodology, he is also content to use his power in a more "pure" form-striking viciously at the minds of those who oppose him. For those who are foolish enough to come too close, he is capable of probing their minds to learn whatever knowledge he cares to obtain; the process is not painless for the hapless victims. Targets who fall before his power wind up as shattered, mindless husks.

The Chamberlain may well be near-immortal in effect. He has apparently died several times, yet returned. He attributes this to the will of his master. It is worth noting that the period between death and return is measured in weeks, not days or hours.

Control over the mind is hardly the Chamberlain's only talent. He is capable of casting far-reaching spells via ritual magic. Given time and proper materials, he can conceivably cause any effect to happen anywhere. Fortunately, the more potent effects-such as, for example, unleashing zombie apocalypses-require far more time and more exotic (read: hard to find) materials to accomplish.

There is one ability that he has managed to ingrain into his very being, which requires no ritual.

The Chamberlain may teleport himself over long distances-or teleport his allies to him.

The Chamberlain has an immense knowledge of spell ritual, much of which has been lost to time. The Midnight Squad may envy and covet the knowledge he possesses, particularly of the Realms Infernal.

The Chamberlain is a being of the 1700's; while he has adapted reasonably well to the current era, he finds the workings of technology baffling. He uses no smartphones, and speaks only in person to individuals. He does not know the first thing about operating a computer.

The Chamberlain gets around this often by simply mind controlling someone who DOES know such things.

Willard Grimwood was presumably born in the mid 1700's or later; records are unclear as to when exactly he was born. Likewise, there is little regarding his early life, beyond the fact that it was during this period when Willard began to learn the arcane methods of magic. Incomplete records are to be expected; in that period of time, even possessing records of such activities would be grounds for accusations of witchcraft-a crime meriting burning at the stake.

In his mid to late twenties, he fell in love with a young woman named Amelia, and was married not long after meeting her. Her diary indicated intimate relations well before marriage, and went into lurid details. She was deeply in love with Willard, and had no issue with his arcane studies-indeed, she was a willing partner in a number of ritual spells he performed.

However, as time went on, Willard began to change. At first, Willard wished nothing more but to improve the lot of society with his magic, influencing the right people to do the right thing. As he studied, his power continued to grow, a fact that began to concern Amelia. He would begin to cloister himself away for days, and coming out each time subtly changed in demeanor. At times, he would be distant; at other times, he would become violent. Amelia began to fear for her life.

Amelia's diaries final entries describe her horrors. The first of two indicated that Willard had assaulted Amelia; the details are best left undescribed. Shortly afterward, she gathered the courage to enter his personal sanctum, and saw things that she would not write nor speak of-but based on other records, it is speculated that she saw the results of human sacrifice.

The man she loved was lost to her.

Shortly afterward, Willard discovered Amelia's trespass, and made to sacrifice her to his true master-the Devil himself. His own journal indicated that not only was he planning to sacrifice his wife, but the unborn child that was the result of his assault upon Amelia, believing that the act would raise his power to undreamt-of heights. Fortunately, he was discovered in the act, stopped, and imprisoned.

The trial was predictably short. Grimwood was tried for witchcraft, convicted, and burned at the stake. He spoke no words of remorse, no pleas for mercy. Even his screams were oddly triumphant in pitch as the flames took him.

It is no surprise that Grimwood's soul went directly to Hell.

According to his own testament-which may or may not be true-his will was so strong that even damnation could not overcome it. After a score of years under the torment, he was elevated to a servant of the Devil; his intellect and will enabled him to rise in power and influence to rival that of the fallen angels. But the Devil wasn't one for mercy: he decreed that for every five years he served as the Devil's chamberlain, he would spend one year in torment before serving again. In spite of this, it was still a better deal than most damned souls received; Grimwood accepted willingly.

In the early part of the twenty first century, Grimwood claimed that the Devil looked upon the Earth and noted a fair amount of souls that should-by all right-be his; but they had staved it off by various methods of immortality or undeath. Clearly, it was best that their status be changed so that their soul would go to their richly deserved "reward". The Devil tapped Grimwood to deal with this stern duty.

Grimwood wasn't interested, and refused. The Devil sweetened the deal: for the length of time he was abroad on the Earth, Grimwood's time would not be counted against his five years free of torment. Grimwood would be free to act as he wished upon the Earth for as long as he pleased, as long as he fulfilled the task before him. To this, Grimwood agreed.

He should have remembered that when one deals with the Devil, the Devil always wins. Grimwood was reborn into an idealized human body in June, 2008, with vastly reduced magical might, and his very eyes ripped from his skull. Only the magical abilities he still maintained allowed Grimwood to see via mystical means. Grimwood would take stock of his surroundings swiftly, learn that his place of rebirth was a place called Mercy Island.

Grimwood spent significant time regaining his power. He claims that he was responsible for the outbreak of zombies in late 2008 (although this claim is contested by some), and for a time worked with a Dark Conspiracy to further his goals. But he soon discarded the Conspiracy, choosing to make his own way. In early 2009, he began to collect resources toward his end-goal; first, he gathered a number of souls from living mortals for future use (one notable soul belonged to a Council Archon, Rossi); secondly, he secured the services of a potent daemon conjured by the Circle of Thorns, using the name Vetis. For most of the year, however, Grimwood has remained out of sight.

At Halloween, the Chamberlain acted at last. Using souls he had bartered for, and artifacts that he had acquired, he prepared to make a major sacrifice-several innocents were to die under his knife, including a descendent of his. The sacrifice would power a ritual designed to end the existences of every immortal being on Earth, simultaneously, whether granted by gods, demons, or other undying forces. The heroes of Hyperion Force, as well as an elder vampire named Baron Craven, disrupted the ritual, saved the sacrificial victims, and watched as a great hand of flame dragged the magus to an apparently fiery end.

A villain with the Chamberlain's appearance was seen briefly in the Rogue Islands assisting the Union of Dire Ambition in an attempt to collect various materials for use by a villain known as the Dimensional Traveller. He vanished again soon afterward; it is unknown whether or not the Chamberlain seen at the time is the same as the original.