What kind of man would live where there is no daring? And is life so dear that we should blame men for dying in adventure? Is there a better way to die?
—Charles Lindbergh, "Journal entry (26 August 1938)"; The Wartime Journals (1970)

Skyshade is a Warshade who is, in a sense, coming out of the shadows. Formerly a flashy stunt pilot, then a shadowy Warshade operative, the destruction of Galaxy City has allowed him to come out into the open. 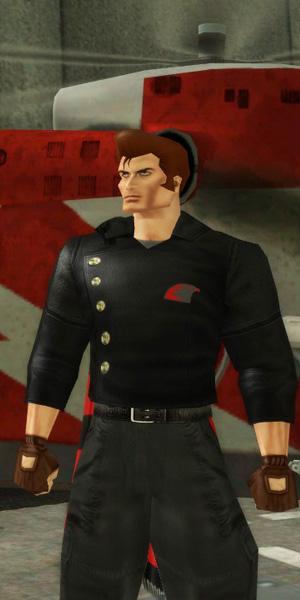 Both the Nictus and the Human had been possessed of a daredevil attitude before they Joined. It wasn't surprising, then, that this trait survived the Joining of the two personas.

Skyshade has confidence to spare. He doesn't do the self-doubt thing. He doesn't worry about "if" he can do something. He'll give it a try if at all possible. This confidence gives him a positive outlook in just about any situation-after all, after nearly being killed in a plane crash, everything else just doesn't compare.

Skyshade also carries over one other important human trait: he loves to fly. While his power as a Warshade allows him to teleport over distances, he will much prefer to shift into his Nova form and fly to a destination.

All of the powers that Skyshade possesses is a product of the Kheldian Joining.

Dark energy, gravity, dark matter-these are the primary weapons of a Kheldian Warshade. Skyshade uses such abilities to ensnare and blast at his opponents. He can drain the living energy from all of his enemies around him by tapping into this power-both as a human and in his Ruktur form. In his human form, he will sometimes use that life energy and infuse it with some of his own essence to create a semi-sentient ball of negative energy that does his will. Skyshade has also learned to force enemies to "Shadow Walk" to him, effectively teleporting them to arm's reach.

Skyshade is adept at using dark fields to protect himself in a variety of ways. He is naturally resistant to energy and dark matter attacks, and can augment this protection by weaving a gravity field to protect him from more conventional assaults. He has manipulated the dark energy to bend light away from himself, appearing as nothing more than an insubstantial shadow. After defeating his foes, Skyshade can tap into their vitality in a limited way to refresh himself and heal his own wounds. He can emanate a dark aura about himself as well, which has a deleterious effect on opponents around him.

If beaten to unconsciousness, Skyshade unconsciously can steal life energy from nearby opponents to revive himself, refreshing the hero back to full capabilities.

In addition to the powers above, Skyshade has a number of other abilities.

The energy forms of Skyshade

As a Kheldian Warshade, Skyshade is able to tap into the powers of superhumans he is near. This does not manifest in any ability to use those specific powers, but instead is used to alter his own. His raw power can increase, or his durability strengthens. He becomes harder to affect by exotic means. This power works on the unconscious level; Skyshade has no control over it.

In addition, Skyshde can transform his body into energy copies of previous hosts of the Nictus he is Joined with. The form of the Hulmanim grants him flight, and an ability to channel negative energy and dark matter for destructive purposes; while the form of the Ruktur makes him physically resistant to harm, strong, and capable of draining life energy from his opponents. In theory, he can also take on the energy copy of his previous human host, but has not yet done so.

Finally, Skyshade is able to "Shadow Walk" himself or others to destinations without physically crossing the distance. While he has only been able to use this ability on himself in a line-of-sight manner, he can transport people he knows from miles away to his location. He has demonstrated the ability to "Shadow Walk" himself even in his Ruktur form.

Skyshade, thanks to his Joined nature, can move at a heightened speed if necessary in his human form. Sometimes, he can carry over this speed to his other forms.

As Roger Montgomery, Skyshade was an ace pilot, performing in air shows as an acknowledged master. Most of his air time is logged in biplanes, but he has a passing familiarity with a number of other aircraft, including Longbow Chasers. While he has never flown an Arachnos Flier, he has trained in a simulator and he believes he can fly one of those as well.

As a Joined Kheldian Warshade, Skyshade is vulnerable to Quantum weaponry; such weapons have an antagonistic effect on Kheldians, and can easily kill a Joined Warshade.

Skyshade tends to wear a set of "Squadron Goggles" when he's out heroing. They were the set of goggles he had been wearing when he had his accident, and they were amazingly unbroken. He considers them a lucky charm.

Roger Montgomery always wanted to fly. It was his biggest dream. Unlike so many, he got to make his dream come true.

Not disciplined enough for the Air Force, but with a knack for flying single-prop planes, Montgomery joined a traveling air show, and was known as a daredevil pilot in an Acro Sport I plane. He quickly became one of the star attractions of the show, dazzling onlookers with feats of aerobatics that only madmen would attempt-and only the highly skilled, highly talented, or highly lucky could pull off. But that luck ran out in early 2010, when an accident crashed him into an open field before a crowd of horrified onlookers. Even then, his skill was unquestionable, not to mention a pilot's heroism: he brought down the plane intentionally before it could reach the crowd.

The accident crippled him. By all rights, he should have died from burns and the impact, but instead he was merely cripped from the neck down. Anywhere else in the world, this would have been the tragic end of his story. Instead, it was just the beginning-because the open field was only ten miles away from Paragon City. One of the onlookers was a reporter named Lillian Issan-the daughter of the top-ranking Warshade on Earth, Shadowstar. Impressed by his heroism, she asked her mother to intercede. Shadowstar approached Montgomery at his hospital bed, and told him of the Kheldian War, the nature of the Kheldians-and the Warshades in particular-and then she told him that one of the unbound Nictus willing to follow the path of the Warshade was willing to Join with him.

The cost: both he and the unbound Warshade would lose a measure of their own identities. The new being would be a new Warshade. He wouldn't be Roger anymore, although certainly the new being would reflect who Roger was, just as it would reflect the Nictus who Joined with him. The upside was that the Joining would repair the damage to his shattered body. Roger considered carefully, and agreed to the terms. He would become a fighter in the war against the Nictus.

Fortunately, the Nictus was a bit of a maverick himself, and the two were a good match. Joined together, they became Skyshade.

Not long after, "Roger" (using that name in civilian life for convenience) found that in the shifted Nova form, he could fly again. That alone made the cost worth paying.

Since then, he has quietly helped Shadowstar in actions all over the city, keeping a lower profile. This recently got blown to hell when Galaxy City was destroyed; he assisted in evacuating hundreds by teleporting them past impassable areas (collapsed buildings, cracked ground, and the like). Recognized at last by the open city, Skyshade is ready to find a way to help in a more open manner.