I remember what it felt like, those first stirrings of the beast within myself, the dark thrill on the edge of change... I was revolted by the way my body responded so eagerly... I told myself I didn't enjoy this-I didn't. Did I?
—Len Kaminski, Marvel Comics Presents Werewolf by Night: Children of the Beast (Issue 54 (1990))

The Fighting Wolfman owes a lot to the werewolf archetype, from Chaney's Wolf Man, to Werewolf By Night, to the White Wolf conception of werewolves. The spin on this one, however, is that he's not a seething mass of beastlike rage upon his transformations. 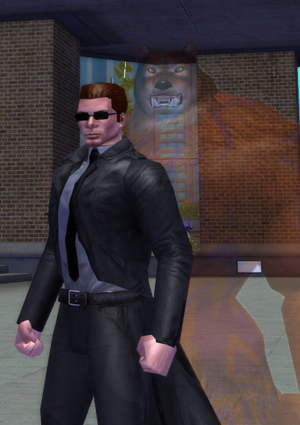 Reeves tends to be a low-key individual most of the time. He had avoided the spotlight, and kept his power under wraps for years. He has a deadpan wit for the most part, but tries to rein in the snark when it feels inappropriate.

In his wolfman form, he is far less restrained; he revels in the ability to use his powers to the fullest, but still keeps control over any beast-like impulses (such as, REND/TEAR/BITE). He maintains his full consciousness in this form, transforming only in body, not in mind.

Reeves's most significant power is the ability to transform into a werewolf. In that form, he is substantially stronger than he is as a human being, and his senses are enhanced.

Eschewing the usual werewolf-y style of simply clawing things to death, the Wolfman uses a method of street fighting that emphasizes high punches and low kicks to augment his substantial strength. This carries over into his "normal" form, making him a decent fighter against the average everyday thugs, and a real threat to the more superhuman set. The longer he fights, the stronger he becomes-this is possibly keyed to a heightened adrenaline reaction.

In his lupine form, the Wolfman heals wounds far faster than most humans-and is difficult to affect with poisons as well, including fatigue poisons. This makes him a nearly tireless opponent-much to the dismay of his opposition.

The Wolfman possesses substantially greater strength than Reeves does in his human form-and thanks to his wolf-like build, he can run far faster than the average sprinter, although not to super-speed class.

Reeves was a security consultant before he got caught up in the Project. He tends to use this background to assess vulnerabilities of buildings and similar structures at need.

While it has not actually been tested, Reeves believes that weapons of silver-or bullets or arrowheads and the like-will negate his ability to heal from wounds caused by them. It's also unknown if his regenerative abilities work the same way in his human form.

Unlike the traditional portrayals of werewolves, Reeves does not go into berserker rages; it is possible that this is because the curse was simply passed down, as opposed to having him as its focus.

Phillip Reeves is the inheritor of a family curse. The origins are sketchy, but it seems to have originated back in the mid to late 1700s. The curse mutated somewhat over the generations; sometimes it skipped generations, for example. Prior to Phillip, it skipped the previous two generations. When it took effect on Phillip-the hard way-it seemed that it had mutated enough to be mostly under his conscious control-except for the three nights of a full moon, where he isolated himself to prevent any harm to others, chained up and locked into a saferoom. Reeves was more than familiar enough with the stories of werewolves, and it was only fortune that he hadn't hurt anyone on his first transformation.

Reeves managed to make this work for him to an extent, working as a security consultant for businesses looking to keep their workplaces secure, quietly keeping his secret until he was caught on cameras during a bank robbery; he'd only wanted to cash a paycheck, and ended up thwarting the armed robbery in his first public use of his powers. This brought him to the attention of "Agent Black" of the nascent Prometheus Project; Black passed his recommendation for Reeves to be introduced to the Project to its manager, Sylph. This brought him in contact with other newly discovered heroes, and led to him joining the Prometheus Project full time.

The Wolfman was my contribution to the Prometheus Project group; unfortunately, the week after the group debuted, NCSoft announced cancellation, which more or less took the wind out of the sails.