Green, green, it's green, they say
On the far side of the hill
Green, green, I'm going away
To where the grass is greener still.
- Randy Sparks & Barry McGuire, Green, Green, chorus (1963)

The Lady in Green was inspired by the pulp heroes era, particularly The Woman in Red ("Thrilling Comics #2", March 1940) who may have been the first female comic book super hero. After drawing a cartoon of the Adventurists of the 1940s, it seemed necessary to actually construct her in game… and then come up with a reason why she would be there. 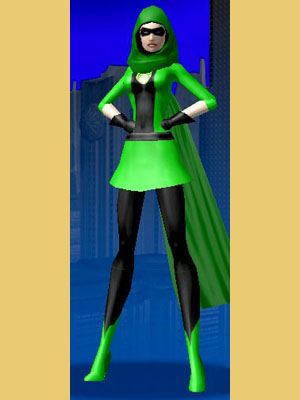 Connie is impulsive, generous, quick to anger and quick to apologize, and far, far too forceful a woman for her time (1940s) and age (she's in her early 20s).

She was 22 when she disappeared in 1942, and it is that young woman currently adventuring in modern day Paragon City. She has yet to develop the experience and maturity with which she (will) handle a courtroom in the 1950s.

I suspect she developed a crush on one of her fellow 1940s Adventurists; whether it every developed into a real relationship at some point after she returned to her own time is a story yet to be told.

The Lady in Green's powers all derive from the magic ring she wears.

Shoots blasts and bolts of green-tinged fiery plasma from her hands. Reports from the ‘40s indicated she could fly and generate massive explosions that only affected animate targets despite the fiery appearance. Those early reports indicated a precise control over the plasma, from the size of a welder’s beam to a fire storm that could consume an oil spill without destroying the associated tanker.

Manipulates said green fire-plasma into the shapes of a sword, rain and holding pens.

Connie is, without the ring, just a woman, capable of being harmed like any other.

Without the ring, her para-normal abilities fade away in time. A few tests have indicated that this is not the immediate result when she removes the ring. However, she claims that it "wants to be put back on" insistently when the separation lasts more than half an hour.

Since arriving in 2008, the Lady in Green insists that her ring is far less powerful than it was in her own time and that she is struggling and failing to do feats that once were easy for her. She also claims that the ring “seems distracted.”

The Lady in Green uses a magic ring inlaid with a green crystal which she wears on the outside of her glove.

She uses no weapons save those formed of fire by the ring.

The Lady in Green shrouds herself in a cowl and cape of Lincoln green. Her uniform is black and green featuring a stylized flame in yellow and green on her chest. She wears a mask. The costume seems to provide no more protection than ordinary clothes albeit, as it neither burns nor tears during combat, and disappears at will to reveal street clothing, it seems to be an illusion or metamorphism provided by the ring.

Steel-industry heiress Constance Walker grew up in the historically cultured society of Philadelphia, Penn.. Despite the luxury, she felt frustrated by the slow-pace allowed to women of her time; so she enrolled in and graduated 2nd in her class from Boston University Law School, the first university in the US to admit female law students. Her father rarely called on her skills, although he recognized that they might be of use in managing her inheritance when the time came. But Connie was not discouraged to study the steel industry as well.

On 29 Aug 1939, Constance Walker witnessed a deliberate act of sabotage while touring one of her father's factories. The Fifth Column used the opportunity to wreck the plant, destroy some prototype machinery, and kidnap the heiress. Drugged and trussed up, Connie found herself at last left alone in one of the endless small warehouse rooms in an underground warren. As she tried to clear her head, it seemed that a small flash of light shot onto the floor before her. She shook her head again. It was just light glancing off an old emerald ring. Someone must have dropped it and she hadn't noticed due to her groggy state. She struggled over to the ring and managed to grab and put it on. A green aura enveloped her and the Lady in Green was born, wresting her way from her prison and k.o.ing all Fifth Column soldiers in the facility with her mystic flames.

Mid 1940, an envelope with a grey border arrived in the Post Office Box Connie kept in the name of the Lady in Green. The Lady had been active enough throughout the metropolitan areas of Pennsylvania to have garnered notice with the newspaper and radio press; this PO Box was the method she’d chosen for the public to contact her. This particular letter was an invitation to a meeting with other adventurers, signed by the Fearless Phantom. Lady In Green attended the meeting and joined the Adventurists.

Cartoonist Idea of the Adventurists, c. 1940

In 1942, the Adventurists -- consisting of Doc Osmium, Captain Kraken, the Fearless Phantom, Mr. Grimwood, Wychery, and the Lady in Green -- were busily involved in the US war effort. On Oct.31, the men of the group were on a secret mission by request of President Roosevelt himself when the remaining members learned of a Fifth Column plot to smuggle in weaponry through Independence Port. Wychery and Lady in Green went to investigate, walking into a trap set, not by the Fifth Column, but by the CoT; a trap meant for the entire team. In the explosion, Wychery died. Lady in Green's body was not found, but she was considered by officials "missing and presumed dead".

It was a surprise to at least some of the surviving Adventurists when a young blond woman showed up, at the end of the memorial services, and announced that she was the new Wychery, sent to take her aunt's place. She became Wychery II in the super hero world. (By that count, our current Wychery is Wychery V. But Wychery III was never well-known to the general public.)

396 days later, a dazed and battered Lady in Green stumbled into the lounge of Captain Kraken's sub, collapsed, and spent the next 62 hours comatose. When she awoke, she had no memories of where she had been during that past year, but shortly was fit and ready to resume active duty with the Adventurists -- and to meet the new Wychery, shocked to learn of the death of her matronly friend.

Lawyer to the Capes

As McCarthyism set in at the end of the 40s and 1. Nov. 1951, Connie Walker doffed the mask of Lady in Green to use her skills as a lawyer to defend mystery men brought before Congress in the paranoia of “McCarthyism”. There is no record of what she did with the ring at this time.

When the Communist Control Act of 1954 was passed with overwhelming support in both houses of Congress after very little debate, extending the Internal Security Act of 1950 and outlawing the Communist Part and “Communist-Infiltrated Organization” saying they "not entitled to any of the rights, privileges, and immunities attendant upon legal bodies", the Adventurists broke apart as an organized group. None of its members were proven Communist, but the generally anti-freedom tenor of the times and the fact that few proofs could be made as to whether or not any group was “infiltrated” made being a “mystery man” untenable.

1. Jan.1961, Constance Walker, American steel magnate, married Sokratis Kapetelis, Greek shipping magnate, in a wedding that was the talk of social columnists for weeks on both sides of the Atlantic.

1979 Socratis Kapetelis died of a heart attack in Cairo, Egypt, while on a business trip.

In 1998, Constance Kapetelis (Lady in Green, ret.), age 77, died in "the Hollowing" of Eastgate. Her body, along with those of so many others in that zone that day, was never recovered.

On June 16, 2008, the Lady in Green wandered down a street in Steel Canyon, gawking at the changes, and practically stumbled into the arms of Doc Osmium. She looked to be still in her 20s, and told him that the last thing she remembered - before tumbling into a strange restricted area where she was asked to deal with mad men with glowing green eyes - was being in an explosion and losing consciousness for a moment or so.

She has resumed membership in the modern incarnation of the Adventurists and her fellow heroes are, gradually, acquainting her with her future past. It is not known when and how she will be again catapulted into the past. She has now been an active hero in modern Paragon City for far more than a year.