Sandy was created from the idea "small woman, big gun".. 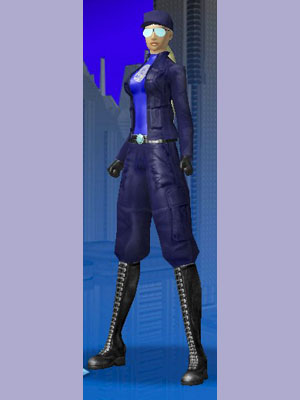 All of Detective Sanders powers come from her equipment, some of which is issued by the PPD and some of which is experimental, from inventors who take kindly to cops. Particularly pretty ones.

The detective wears an experimental pair of gloves which give an added "jolt" to her punches when she is forced into fisticuffs.

Always has on hand a medical kit complete with the latest prescriptions for getting a wounded officer back on duty as fast as possible.

The daughter of an urban archeaologist and a police officer, Beckett Sanders ("call me Sandy") followed in her fathere's footsteps. She worked her way through the ranks of law enforcement and, showing an uncanny aptitude with firearms and hight tech electrical devices, she's worked both with PPD's Swat team and as a detective.

Recently she has been assigned to work with Det. Oscuro on several cases. Unfortunately she finds herself attracted to the big bruiser - which is upsetting her sense of proper police protocol.

Detective Sanders and Oscuro were rolled up at about the same time, both I and Major Victorious's player having come up independently with our ideas.