O lost, and by the wind grieved, ghost, come back again.

The Ghost Wife was inspired by the Player's first run-in with Ghost Widow. Additionally, I wanted to work with a limited palette and the Concealment powers in order to create a ghostly figure. This dovetailed with Major Victorious's Player's creation of a master mage character and, with a lot of back-and-forthing their background was formed. 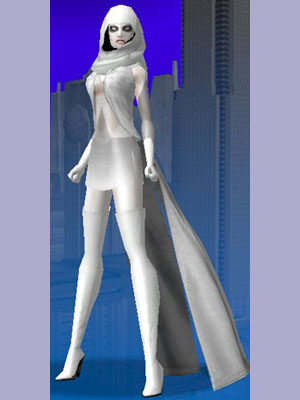 Warm and caring although, as her memory fades, her ties to humanity become more distant. She has found that being Hostess at the Tavern gives her enough contact with human needs and emotions that she is able to remain on this plane, albeit she tends to forget the real reason she remains and the face for which she searches each time a new-comer enters the Tavern.

She tends to be the voice of reason, calm and steady… and just a little detached.

All of Ghost Wife's current powers seem properties of her ghostly state; she does not seem to recall or be able to use the magic that was her birthright as a living heroine.

The cold finger of fear, stripping one of control, energy, and reason. Ghost Wife seems able to suck certain vital forces from her target and transmit them to herself and/or her allies present.

Ghost wife seems able to contain and release at will some energies that she intercepts as though she herself were a "black hole" of sorts, or, more likely, a conduit to the nether world.

When she was alive, Wychery (IV) was - deliberately - a popular and congenial "face" for the witches of Croatoa while the area was cordoned off from the rest of the city and state. She was an active heroine employing a great many magic spells of offense and defense for the people of Paragon City. She did limited research into new magic spells, but relied on others of her coven with a more scholarly bent when deep research was necessary. Several of her family are professors of magic at the University at Salamanca.

Ghost Wife seems content to restrict her charisma to making the Tavern guests feel at home - and to exerting a measure of leadership over the Tavern staff.

Wychery (IV) used a wand that was destroyed in her final battle. Ghost Wife has not been observed to use weapons as of yet. 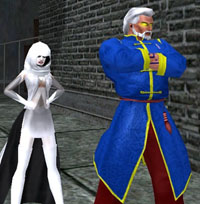 I found a note in a pocket in my robe; a pocket I had forgotten even existed. It contained much of the information herein transcribed. I believe these things are true, but the memories of them have grown faint. I am hoping that I will remember to peruse these dossiers often enough to remind myself of who I am. But... I forgot that note’s existence. I will attach other documents here. Perhaps they will help.

Scrawled on Deposit Slip from an automatic-deposit account at Paragon City Bank:

“I was called back... drawn to an elderly magician, the Grand Magus. We worked together for a few weeks. Gradually he brought back my memories and I became more substantial in his presence... I am Dyce Holmes.

Very gradually, very gently, he brought me to recognize him. Xavier. My love. My husband. I am - I was Mrs. Xavier Castille. He has grown so old, searching for a way to bring me back.”

“Greg, first I want to say thank you. For covering for me at work, for putting up with my outbursts and irrationalities. You’ve been more than a co-worker, more than family. You’ve been a trusted friend and confidant and I do not know that I can properly thank you for that. You know how... difficult these last few months have been. Ever since Dyce died, I haven’t known what to do. I’ve gone from being furious at her for playing Cape, to being furious at myself for not being there to save her, to being just plain furious. I’ve been on a dark road... and I’m sorry to tell you, I have no intention of getting off of it.

It’s not as bleak as it sounds. Because there IS a light at the end of this road, and I can see it so clearly now. I’m bringing her back, Gregory. Maybe you’d try to talk me out of this... I know Guy would. That’s why I’m only leaving this note. Now, don’t panic. I know enough about Necromancy to know that it is not what any of us want. A vampire, a zombie, something worse? No. I would never do that to Dyce. I mean it. I’m bring her back. All the way back, flesh and blood, tears and laughter, pain and pleasure. I am bring her back to LIFE, true life, whatever it takes.

I know there are dark resurrection magics out there, but surely there must be another way. Magic can do anything. That’s what you and I have always opened up our lectures with. So now I will put such a bold declaration to the test. I have long denied the power of my birthright. Perhaps, had I embraced the power of the Grand Magus sooner, I might have been able to prevent what happened to Dyce. All I can do now is reverse it. I am enclosing my resignation papers with the University, along with a key to my Sanctum. You may use whatever you need from it until Dyce and I return.

P.S. Please feed my Imp for me while I’m gone.”

‘Eurydice ‘Dyce’ Holmes Castille, better known to the residents of Croatoa and Paragon City as the magical heroine, Wychery, died last Tuesday in a battle against Ghost Widow and the forces of Arachnos, while enabling the rescue of a dozen Salamancan students being held hostage. It was reported that the villain managed to temporarily interfere with the normal Mediport receptors, resulting in the loss of several heroic defenders. Descending from a long-established Croatoan family of magicians, Ms Holmes has worked closely with M.A.G.I. and the heroes of Paragon City publicly for the last 5 years. She is survived by her husband of one day, Prof. Xavier Castille....”

“You are cordially invited to celebrate the hand-fasting and wedding of Eurydice Trisily Holmes and Xavier Castille at Salamanca University Chapel Courtyard on the sixth of June, 2006, at 11:00 in the morning. Reception will follow.”

“...a family of witches and wizards with a history that reaches back through the Salem witches in colonial times and beyond, to an enclave in Yorkshire, England, that existed during the Dark Ages of Europe.

The first person who might technically be called a “Wychery”, Desire Cardiff, was reported in this country a few months after the Salem hysteria, riding a "circuit route" of "slate schools" where young witches could be instructed in how to practise their craft more circumspectly and to the benefit of society. Born circa 1670...

Most Wycherys have lived beneath public notice, as teachers, pharmacists, librarians, and the occasional stage magician (usually when the mantle fell to a male). The last 50 years or so, the family -- known as the Thessaly Coven -- has been in the forefront of defending Croatoa from a prolonged dimensional assault against its native magics....

Persephone Cardiff retired as Wychery in Oct.2000. She was succeeded by her niece Eurydice Holmes, the fourth publicly-known witch to work under that title....”