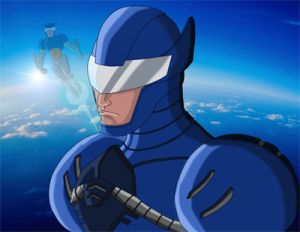 "I was once a soldier for the US Military, fighting for my country and everything in it, I loved it! Until I lost both my arms and legs in the war and became a human stump. I volunteered my body over at Crey Industries to test out their newest research in Cybernetics."

"It didn't take long for them to design Cybernetic limbs for me. But these weren't your ordinary cyber limbs, these limbs were energy powered and built for battle. I could control energy and channel it through my new arms! I can run faster, jump higher! It was Incredible!"

"But there was a catch, Crey wanted me to work for them. But after learning Crey's true intentions, I quit Crey Industries and made my new life as a cyber-powered hero of Paragon City!"

Skylar Grayson was a proud military man. He wanted to serve his country from a very young age, and once he was able he wasted no time in enlisting. His career in the US Army was long, and productive. He was an excellent soldier, and a man who was easy to rally behind. It didn't take long for Grayson to move from the lower ranks to being a commanding officer. His friends and colleagues were all proud of his success, but none more proud than Skylar. Proud to serve and protect the country he loved.

Soldiers not injured during tours of duty count themselves among the very lucky. Skylar had seen his share of battle over the years. While he had been injured on occasion he continued to fight. However there are some injuries one can't simply walk away from. The base Skylar had been stationed in came under attack by the enemy. This brazen sneak attack left many wounded - but Sklyar Grayson suffered the brunt of the attack.

While defending his fellow soldiers, Skylar was wounded. Severely. Skylar was pronounced dead on scene, and his remains sent back to his homeland for proper burial.

The global technology giant showed interest in the fallen soldier. A man of his great achievements was of great use to the company, who had recently acquired another soldier, Victor Berman, for similar purposes. With no family to speak of, the US military sold Grayson's remains to Crey, who claimed their research would benefit the military in the end.

Both Victor Berman and Skylar Grayson were inducted into Crey's experimental CYBERMAN program. If successful, they would fit the fallen soldiers with cybernetic prosthetic limbs and a devastating weapons arsenal. They would become the first in a new line of living weapons, sold to the highest bidder.

The tests showed Grayson with a higher DNA compatibility. Berman, who was experimented with prior to Grayson, was considered a write off. He was fitted in a much larger, and less practical frame. Berman, was confined to a cell, like an old file being stored away. His cries for help unheard by all.

Grayson however, was everything the design staff had hoped for. He was fitted with a new, sleek design. It was aerodynamic, allowing him to fly easily at supersonic speeds. It was indestructible - allowing him to take and withstand almost incalculable amounts of punishment. The weapons array, linked to his brain allowed the pre-programed actions to be controlled by thought. The only issue, was that Grayson was still dead.

They used a sophisticated computer system to effectively control the brain within Grayson's head, solving the problem. For a period of eight months, Crey used Grayson, now called Cyberman, in a series of black ops missions. His destructive powers were tested, thoroughly. Cyberman had become a success. But the success was short lived.

Upon acquiring Grayson, he was thought to be dead. There was little brain activity, and due to the severity of his injuries there was no need to check. However, miraculously, Grayson was only comatose, and not in fact dead. The constant use of his brain by the Crey staff caused his brain to reset, and wake. Cyberman was now in full control of his body. Crey explained what happened to him, and what his new duty was. Grateful for the chance at new life, Grayson agreed to continue to work for Crey.

It wasn't long before Crey's dark intentions became known, however, and Grayson decided to leave the company. He was met with nothing less than heavy resistance. Skylar fought his way out of the company's tightly held grasp. During the melee, Victor Berman was freed, escaping to Etoile to later become Cyborg Sinister.

Skylar Grayson was once again his own man. But he was not the man he used to be. While once a simple soldier, he now held in his own hands the destructive force of an entire army. This much power was too dangerous to be used, as shown by his creators. But if used correctly - this power, this great power, could help enforce justice and not terror as intended by Crey.

Now calling himself Cyberman, Skylar Grayson traveled to Paragon City to become a soldier in a new war.

From Defender to Challenger

It didn't take long for Cyberman to make an impression in Paragon. It was Xanatos who first took a notice to the rookie hero, and mentioned him to Exodus and Bayne after several team ups. Word of his exploits spread fast, and within weeks, Cyberman was offered a place in the ranks of The Defenders of Paragon, who at the time, were the city's most renown and prestigious group of heroes. 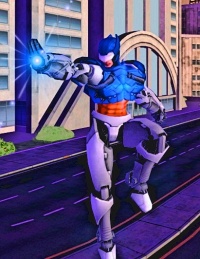 It was here, with The Defenders that Cyberman met the allies that would define his career in Paragon. Nimbus, Liquidus, and The Havok Brothers. Along with Cyberman, this group of heroes existed almost as a sub group from within The DoP. They frequently ran missions, and relied on each other, forming bonds that to this day - still hold as strong as ever.

After The Havoks' call to arms in Sirens, the duo left The DoP and formed The Frontline - the first true counter villainy group. The rest of the Defenders wished the brothers well, but it was Cyberman, along with Nimbus and Liquidus who left as well, and would form the foundation of The Frontline.

Now, Cyberman was involved in the battle against The Sadistic Seven, and the rest of the Rogues Gallery. He battled against the most infamous villains in Etoile. Villains like Mr. Mud, Mindswipe, Emperor Xanatos, Pumpkin Face, Ghost Face and The Elements of Destruction. Cyberman was one of The Frontline's greatest assets.

Following The Frontline's disbandment, Cyberman worked with Liquidus and Freedom Force, along with other former Frontliners Nimbus and Johnny Turbo. It was here that he met Foxy Ferret for the first time. Unfortunately, Freedom Force met the same fate as The Frontline, angry and complacent with the way politicians had been showing their gratitude to these groups, Cyberman chose to work alone.

For two years, Cyberman was solo - relying only on his own devices, despite frequent attempts from Nimbus to work together. Around the time Red-Havok returned to Paragon, Cyberman was contacted by the mysterious Mr. Shade, of Orthrus Inc. Shade offered Cyberman a chance at making a real difference against the villains of Etoile. Cyberman wanted nothing to do with Shade, until it was mentioned that Victor Berman, was their first target.

Shade found Cyborg Sinister was planning to destroy the planet using a machine called The Mass Eradicator. Shade blackmailed Cyberman, causing him to believe Sinister only existed because he was allowed to escape during Cyberman's battle with Crey. Reluctantly, Cyberman agreed and was surprised to find himself working once again with old allies.

The Infiltrators dealt with Sinister for months and ultimately saved the earth's destruction in 2012 by destroying The Eradicator. Sinister met his fate as well at the hands of Havok. After this, The Infiltrators all but split, leaving it to Longbow Agent Slate to pick up the pieces of this shattered group. This time, with Xanatos involved, the group worked together to overthrow Warrior Queen - Athena, and super villain Phanto.

Following these events, the heroes learned of Shade's true intentions and they mounted a failed attack against their former benefactor. In the aftermath, the heroes, old friends and new, formed a new group dedicated to challenging evil in all its forms. 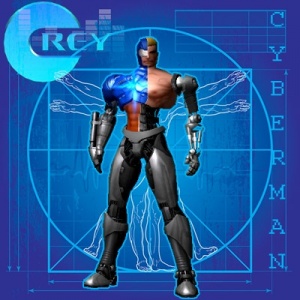 Invulnerable Cyber-Frame:
This rigid 3-D knitted metallic exterior provides protection from physical attacks as well as acid, heat, cold, most forms of energy, radiation, and electricity. The hydraulic pseudo-musculature gives the frame itself more strength, and allows for comfortable range of motion.


HUD:
Cyberman's HUD, or Heads Up Display is an advanced cybernetic Interface combined with visual menu overlays. It includes a visual tracking system and battle computer.

Energy Projection:
Cyberman is equipped with laser-guided particle beam emission units mounted in the palm of each hand. He is able to fire off intense energy blasts that build in intensity as they travel through the atmosphere by picking up static and ambient energy. Blasts can be focused, charged or area damage.

Nova Core:
Powering Cyberman's mighty frame is the Nova Core. Created by Crey Industries, the Nova Core was the first, and last of its kind - thanks to the destruction of the research facility where it was built. The Core was intended to be a self generating power source, created by perpetual energy explosions. These emissions are contained within Cyberman's chest plate, however he has the ability to temporarily open it's safe housing and unleash it's raw destructive energies.