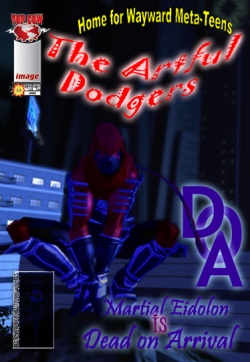 Known as a "Home for Wayward Meta-Teens," The Artful Dodgers are a fictional supergroup of heroes playing on the Virtue Server of The MMORPG "City of Heroes." Founded by User:Quiet American in September of 2006, "The Dodgers" are a themed light role-play and story driven group dedicated to the concept of troubled teens who just happen to be super-powered heroes.

The first "Dodgers" were Juvie, Woe's Child , Casval Regelis, and Princess Powerfull. Since then the group has grown to include over 13 active players who have developed over 31 unique alts, each of which plays out their own rich backgrounds and involving story arcs while contributing to The Artful Dodgers' rich "Dodgerverse."

Due to the characters' various social problems and the diverse nature of the role-play possibilities inherent in the group's concept, internal squabbling and personal insecurities plague The Artful Dodgers. However their 'motto' "Learn to take care of yourself and each other, while taking care of Paragon," helps unite these brash individuals into a strong united front.

"Become a hero! The first life you save, maybe your own!"

Membership is still growing! If you're looking for great role-play and a fun atmosphere to be a hero! Check out our guildportal site at: The Artful Dodgers' Visitor's Center

Pages in category "The Artful Dodgers"

The following 30 pages are in this category, out of 30 total.